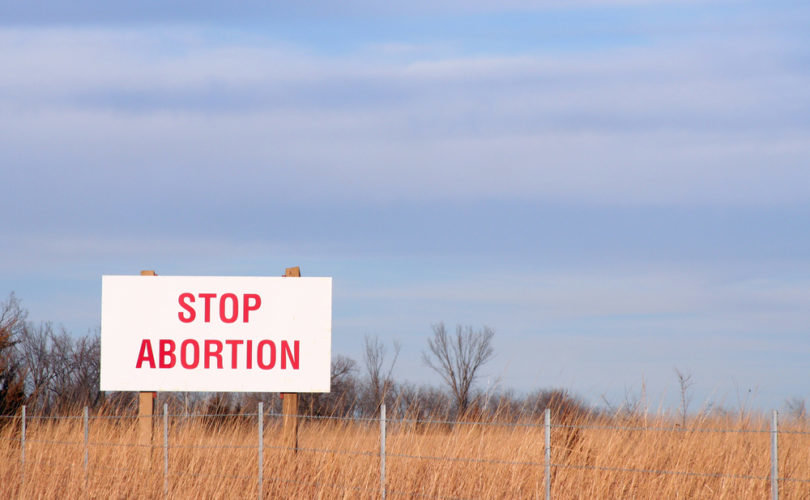 Troy Newman starts off his new book (written with colleague Cheryl Sullenger) with a confession: “I like it—no, I love it—when abortion clinics close. When the news hits that another abortion clinic has shut down or that some abortionist has been stripped of his medical license, my senior policy adviser, coauthor, and friend Cheryl Sullenger and I break out the old standard ‘Another One Bites the Dust.’”

The book is called Abortion Free: Your Manual for Building a Pro-Life America One Community at a Time—and lest anyone should think the title is a boast, bear in mind that Troy Newman’s Operation Rescue is responsible for the shutdown of multiple abortion clinics, the revoking of abortionists’ medical licenses, and constant exposes of abortion industry malpractice and malfeasance. Rolling Stone called him “One Man’s God Squad.” The Los Angeles Times described his modus operandi as “aggressive confrontation” and “hardball tactics.” CNN called him the “nemesis” of late-term abortion providers. And the cerebral First Things, a journal of religion and public life, called him “a fearless and creative pro-life leader.” Reading Abortion Free, it’s not hard to see why—it is part memoir, part strategy and tactics manual, part battle cry.

It’s always interesting to me that although the “back story” of each pro-lifer differs, so many of them seem to have one thing in common: Exposure to the reality of what abortion is. For Newman, it was the same thing—he saw a picture of an aborted baby. It horrified him, and he joined the growing Rescue movement to do something about it. Dedicated pro-life activists across the country were sitting in front of abortion clinics, blocking the doors, physically placing themselves between what Newman often refers to as “chop shops” and the women seeking to enter.

“Operation Rescue first burst into national headlines in 1988,” Newman writes, “with mass arrests at abortion clinics in Atlanta, Georgia, during the Democratic Convention, and later in 1991, during the Summer of Mercy protests in Wichita, Kansas. At that time, Operation Rescue oversaw the largest peaceful civil disobedience movement in American history.” That one fact did actually surprise me—I’ve heard countless Rescue stories from pro-life veterans on both sides of the border, but I’d never realized that the Rescue movement was, in fact, even bigger than the peaceful demonstrations of the Civil Rights movement decades before. It’s a testament to the power of the media and those who write the official history books that one set of protestors is recognized as heroic while the other is dismissed as fundamentalist rabble—even though in many cases, such Chicago’s Joe Scheidler, for instance—they were the same people.

Then Bill Clinton, the abortion industry’s favorite pantsless feminist, signed into law the Freedom of Access to Clinic Entrances Act of 1994. Federal authorities were sick of dealing with thousands of pro-lifers blockading abortion clinics, and mandated heavy prison sentences for even one offence. Pro-lifers started heading off to prison. Pro-lifers often have families, and long prison sentences simply weren’t a sustainable option. It was time to change strategies. The new Operation Rescue, officially under the leadership of Troy Newman in 1999, recognized that. As Newman told me in an interview some time ago, “We decided that we had to put the other guys in jail.”

That is where Abortion Free essentially begins. Instead of pro-lifers going to jail, Operation Rescue now uncovers and publicizes information that will put abortionists behind bars. Rather than shutting down clinics for hours or days, Newman and his colleagues seek to put abortion clinics out of business for good. And in the last ten to fifteen years, 73% of America’s abortion clinics have closed. The abortion rate is the lowest it has been since 1973. The abortion industry, as their frantic fundraising emails and shrill media interviews indicate, are running scared. “We can put the screws to them on a local level,” Newman told me. “That’s where we’re winning.”

Abortion Free takes us through the 2005 “Year of Rebuke,” in which Newman and Sullenger moved to Wichita, Kansas, to confront late-term abortion provider Dr. George Tiller and put him out of business. Their tactics combined private investigative work in the form of tracking ambulances leaving Tiller’s clinic with butchered abortion patients, public exposure of the abortion procedure through graphic “Truth Trucks,” which showed Wichita residents what was actually going on behind closed doors, and the relentless pursuit of criminal charges for Tiller’s shoddy practices. We are also given a fascinating, behind-the-scenes look at abortion politics, and how often Democratic politicians were (and are) willing to cover for their friends in the abortion industry. No matter how insidious the practices Operation Rescue brought to light, Tiller was defended by the media, which refused to cover much of what went on inside his clinic, as well as Governor Kathleen Sebellius (who later became Obama’s Secretary of Health and Human Services).

Newman and Sullenger also provide insight on that fateful day when Dr. George Tiller was shot in the head by a mentally unstable man named Scott Roeder on May 31, 2009. Hundreds upon hundreds of death threats poured into Operation Rescue, which had been one of the first organizations to “denounce vigilantism” and offer sympathy to Tiller’s family. Although far-left sites like Salon routinely attempt to insinuate that Operation Rescue was somehow involved in Tiller’s murder, this is obviously nonsense—even the Wichita police contacted Operation Rescue only out of concern for their safety. Even more tragically, it was revealed shortly after Tiller’s death by several of his colleagues that Tiller, exhausted from constantly fighting determined anti-abortion activists, had planned to retire. The path of peaceful resistance had almost reached fruition, when Roeder used violence to destroy what pro-lifers had been working towards.

The rest of Abortion Free is a manual for all pro-lifers who would like to replicate the success of Operation Rescue in their own community. Newman and Sullenger carefully detail how to identify your local abortionist and do careful research on him. They explain how to perform undercover sting operations to uncover malfeasance and law-breaking. After this is uncovered, they walk through the steps needed to demand follow-up: Issuing press releases, engaging in strategic protests, contacting lawmakers, and relentlessly pushing the issue.

Newman’s strategy, he told me, is based on one basic assumption: All abortionists are breaking the law in some way. It is the duty of pro-lifers to find out where and how, and then relentlessly push for action. Each of these steps is replete with actual examples of Operation Rescue’s successful use of them. These are not just theoretical strategies—each of them has been tried on the field of battle. Especially for this reason, Abortion Free is an invaluable manual to pro-lifers seeking to save lives in their community.

There are very few anti-abortion organizations with the track record and history of Operation Rescue—that resume alone demands the attention of serious-minded activists. Abortion Free gives a fascinating look at past and ongoing pro-life campaigns, the history of our movement, and how to circumnavigate failure and celebrate success. As Troy Newman says, “It’s the best of times and the worst of times for the pro-life movement.” There may be a pro-abortion president, a pro-abortion Supreme Court, and a pro-abortion media—but there are also ways to shut down abortion clinics for good and save the lives of pre-born children.

And that’s how many communities are becoming abortion-free.