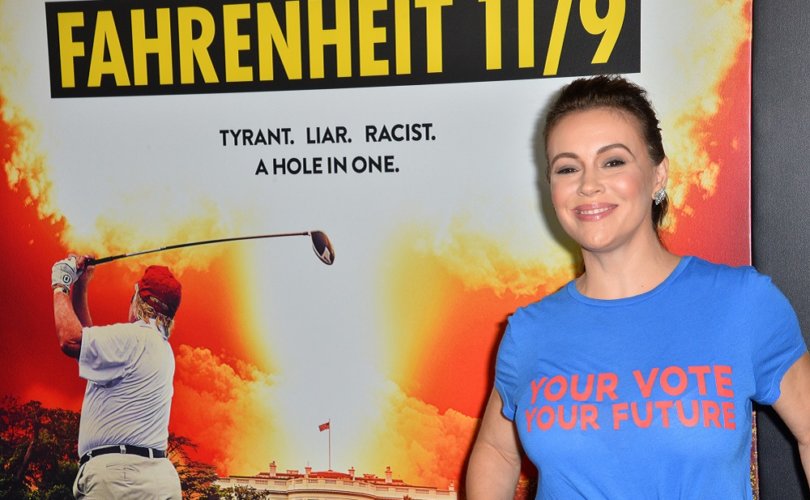 May 13, 2019 (LifeSiteNews) — What do Alabama, Arkansas, Florida, Georgia, Iowa, Kentucky, Louisiana, Maryland, Minnesota, Mississippi, Missouri, North Dakota, Ohio, Pennsylvania, South Carolina, Tennessee, Texas, West Virginia, and Wyoming all have in common? They all have introduced bills, have bills pending, have passed laws, or in some cases have had laws vetoed or temporarily blocked that would protect unborn babies from abortion once a heartbeat can be detected. These laws are saving thousands of babies from being killed by abortion. But not everyone is happy about that.

Friday night, Hollywood actress Alyssa Milano (46) called on women to join her in a sex strike to protest laws that protect unborn babies from abortion once a heartbeat can be detected. Milano has been joined by better known and even older actors Alec Baldwin (61) and Bette Midler (73) in what can only be viewed as a desperate attempt by the elderly to appear young and edgy.

The weaponization of sex is not a new theme in life or in art. In his play Lysistrata, in 411 B.C., the ancient Greek poet Aristophanes has the women of Athens withhold sexual privileges from their husbands to pressure them into ending the Peloponnesian War. But his play Ecclesiazusae, 391 B.C., may have deeper relevance to the chaste posturing and the impure implications of Milano, Baldwin, Midler, and company. In this play, Praxagora leads the Athenian women to take control of the government and impose sexual equality for the old and unattractive. She wears her husband’s clothes and a false beard and stops shaving her armpits. This has unintended consequences, as her husband Blepyrus emerges from their house wearing her clothes.

Pro-abortion militancy among the elderly is a dark but fascinating study. No longer rooted in the hot-blooded desire to emancipate sex from babies and responsibility, it points to a range of murkier psychological crises. Milano is old enough to be a grandmother and Midler old enough to be a great-grandmother, yet they make cringe-worthy vows and protestations about their sexual activity. Perhaps it’s a conscious or subconscious variation of the Peter Pan Syndrome, a refusal to grow up and take adult responsibility, resulting in a rejection of what sociologists refer to as the grandmother hypothesis. Basically, humans are one of the few species that have menopause, and sociologists think it is to facilitate grandmothers in assisting their adult children in raising their grandchildren.

Most people happily accept the arc of life and the transformation from infantile selfishness to parental other-directedness, but not all. Some make a vice appear as a virtue, proposing the superiority of caring for animals rather than children. Milano has said: “Every time I decide I want a child, I get another pet. I have 3 dogs, 13 birds and 3 horses, what does that tell you?” Others, like Bette Midler, advocate the meaningless plasticity of human sexuality by championing the transgressive. According to Wikipedia, Bette Midler “…built up her career singing in the Continental Baths, a local gay bathhouse where she managed to build up a core following.”

My dad once observed a curious notation above one of the Stations of the Cross in a church in Quebec. It read: “For the surprising sins of the aged.” While support for abortion among the young is often rooted in a desire for unfettered promiscuity, support for abortion among the elderly is darker and more sinister. In our culture of constant technological progress, newer is necessarily better. We internalize this principle and apply it to ourselves. Our children become our existential enemies. They are next year’s model that would supplant us. The only way for the elderly to remain young is by killing their own children.

And this hopeful trend is even more prominent among the young. The young are more pro-life than the aged.