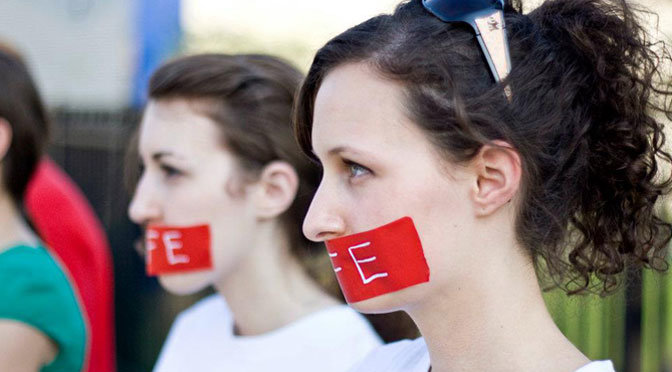 April 5, 2016 (LiveActionNews) — The debate over whether images of abortion victims are effective in changing minds on abortion has been going on inside the pro-life movement for years – and many of us can testify to how they have changed our views and the views of those around us. One pro-life activist shares a story about how one of these images led to an invitation to speak on a college campus…

Don Blythe, who refers to himself as a Christian abolitionist, founded At the Well Ministries and has been involved in pro-life outreach work for over 32 years, regularly maintaining a presence outside abortion facilities. In addition, his Project Truth has distributed tens of thousands of brochures in front of high schools. That campus outreach has taken his team to over a hundred colleges: from Stanford to UC Berkeley, Santa Barbara City College to Shasta College, UNLV to Oregon State to Laney College Oakland.

Blythe is a familiar name in pro-life circles because his niece, Kortney Blythe, who was tragically killed in a motor vehicle accident in 2011, dedicated her life to pro-life service. Kortney often joined her uncle during his campus outreach programs.

It was during one such event that a college professor approached Kortney and asked her which one of them wanted to come and take on his sociology class. Kortney told the professor that either she or her “Uncle Don” would go and according to Blythe, she gave him her uncle’s phone number.

“Hey, Uncle Don, here is a speaking engagement for you,” Blythe recalled her telling him.

Blythe prepared a PowerPoint presentation and showed up at the class prepared to speak – but also planned to show students a video containing images of abortion victims.

I tell the students ahead of time, “During my presentation I won’t show you disturbing pictures of injustice. I won’t spring it on you – but at some point in my presentation I will have a 7 minute video to show. If you choose to leave or close your eyes you can do that.”

I have never seen one person close their eyes but two or three have walked out.

Blythe claims that he has seen 80% pro-choice students change their views so drastically after he shows the video of abortion victims, that only about 30% remain pro-choice. In addition, some students who watched the video now call abortion murder.

Blythe said that although he has asked several professors to allow him to speak to their classes, no one ever responded before until this the professor stepped forward. When the professor invited Blythe back for the second semester, it peaked Blythe’s curiosity, prompting him to ask why the professor allowed him to come and give a classroom presentation.

The professor’s response surprised even Blythe and has convinced him all the more that the use of abortion victim imagery will leave a long lasting positive impression on many people. The professor told Blythe:

Let me tell you, I think probably the reason is that when I was in elementary school, I was getting ready to go into my mom’s car after school and I saw this old woman holding a graphic picture of an abortion.

That had a very real influence on me, without giving away my views it had an influence to allow you to come in to give your presentation.

So, because an “old woman” stood on a sidewalk near an elementary school in Ohio, holding an image of abortion victims, Blythe has been enabled to share the truth with many students today. But even better, the professor told Blythe that after he speaks there are students who choose life for their babies.

Let me tell you something Don, just between you and me, I want you to know there are a number of students who have come up and talked to me over the years after the class. Your presentation has influenced them to not have an abortion. One young lady even skipped her class to sit in on your class because she heard you were going to be speaking.

An old woman who once held an abortion victim’s photo on a sidewalk opened up doors to share life and save babies years later. Blythe observed that the woman probably never knew the profound impact that she had on that once young, elementary school boy who lived in Ohio at the time – and the impact she had on future generations.

Maybe the rest of us don’t realize our impact, either.