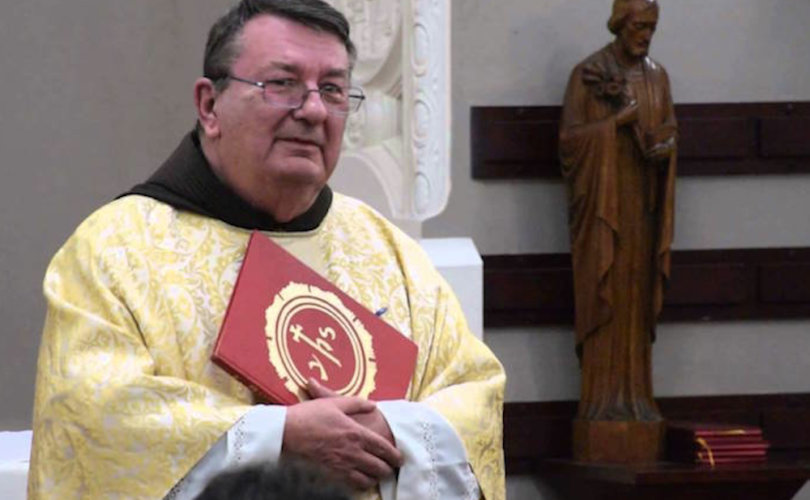 Show your support for Fr. Weinandy! Sign the pledge here.

November 2, 2018 (The Catholic Thing) – A year ago yesterday I made public a letter that I wrote to Pope Francis expressing my deep concern about the “chronic confusion” in the Church and the way that his “seemingly intentional lack of clarity risks sinning against the Holy Spirit.”

In the immediate aftermath of the letter's publication, I received over 300 emails and over 40 letters (most from the United States, but a fair number from many countries around the world) – all of which, except two, were positive.

Moreover, over the course of the past year I received another 100 or so emails and even Christmas cards from people I did not know – all of which were, again, positive. The majority of the responses were from the laity who expressed their support and invariably thanked me for giving expression to their concerns and thoughts, but believed either that they did not have the ability to articulate them or felt, if they did express them, that they would not be heard or taken seriously.

Besides the laity, I also received significant responses from Catholic academics and, surprisingly, from over thirty bishops – all positive. And this does not include the many affirmative comments, from laity, academics and bishops, I have received in person when speaking at or attending conferences over the past year.

Many people have expressed their regret that I have suffered because of the letter, but I have suffered very little compared to the joy I have experienced – the delight of knowing that so many of the faithful were grateful and pleased at what I had done.

What I want to highpoint in this brief message, however, is not the importance of my letter to Pope Francis or the positive responses to it, but what for me is the significance of what Jesus is doing in his Church.

Readers may recall that, while I was in Rome last year, I spent a considerable amount of time in St. Peter's praying about whether I should articulate my apprehensions and concerns about this present pontificate. In the end, I asked Jesus for a sign.

If he wanted me to write something, I asked that he allow me, within about a five-hour time frame, to meet someone I knew but had not seen in many years, and that I would never expect to see in Rome at this particular time. The person could not be from the United States, Canada or Great Britain. Moreover, in the course of our conversation, the person would have to say to me – “Keep up the good writing.”

That is a very complex sign to say the least, and I now believe that it is in itself an inspiration of the Holy Spirit because, on my own, I could never have concocted such an intricate scenario. Jesus did fulfill the sign in every particular and did so in a most marvelous way, for the person he chose to enact the sign was an archbishop.

Two clerics publicly mocked and made fun of the sign and its fulfillment, but here I want to offer my personal opinion concerning its importance – at least its significance for me.

That Jesus fulfilled my requested sign struck me as Jesus expressing his own concern for the troubling situation that presently exists within the Church, his body. From this personal perspective, I thought that, in the end, his loving concern for his Church far exceeds my own, and what he is doing is far more important than the writing of my letter to Pope Francis.

I came to see my letter as a mere postscript to the concern Jesus himself manifested when he fulfilled my sign. Others may have different interpretations or no perspective at all, but I thought it worthwhile that I share my own understanding.

A great deal has happened within the Church in the year since I made public my letter. I do not need to rehearse all of the evils that have now come to light. They are common knowledge. The concerns and apprehensions that I expressed in my letter are more relevant now than they were a year ago.

The Body of Christ presently suffers more than it did then – and I fear the suffering will become even more intense. Moreover, in the midst of what has been exposed, many commentaries and analyses have been published in newspapers, in journals, on the Internet, and in blogs, some better than others, but all decrying the present ecclesial situation and often offering ways forward.

For me, what is presently most troubling is the vague, uncertain and often seemingly nonchalant ecclesial response to the evil, not only to the grievous sexual misconduct among the clergy and bishops, but also to the scandalous undermining of the doctrinal and moral teaching of Scripture and the Church's magisterial tradition.

Likewise, there appears to be little awareness of or concern for the suffering that this mentality has inflicted upon the Church, especially upon the laity. Significantly and sadly, even if those in authority were to make adequate responses to the evil at hand from this point on, it would not be sufficient to rebuild the trust that has been broken by their past words and actions.

Yes, many in high ecclesial positions are good and forthright men, but they are not the ones who are presently being listened to, or making the decisions, or setting the ecclesial tone.

I am, nonetheless, hopeful. I am hopeful because I know that many are praying and even fasting for the renewal of faith within the Church. Moreover, I am convinced more now than a year ago, that by exposing all of the evil, the Lord Jesus is in the process of purifying his body, the Church.

The present sin within the Church is often terrifying and disheartening to see. It is good for us to keep in mind, however, that the fire of the Holy Spirit may burn, but its burning is unto holiness – and that is wondrous to behold.

Published with permission from the The Catholic Thing.