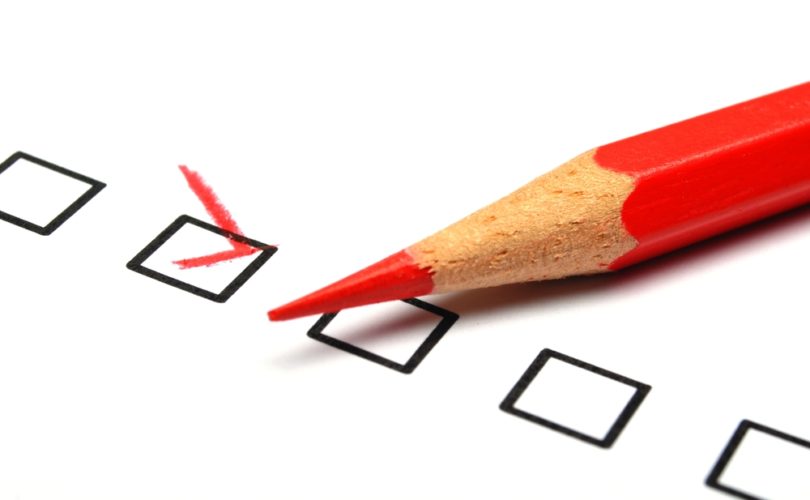 May 1, 2018 (American Thinker) – Pew is at it again, producing a dubious poll that tries to “prove” that Americans are becoming less religious.

Previously, Pew invented the group called “nones,” who constitute about 23% of the population, which Pew tried to portray as being people without faith. The reality is that of that group, only 3% said they are atheists, 4% said they are agnostic, and the remaining 16% are those not aligned with any particular denomination. One has to question the motivation for grouping the tiny fraction of Americans who reject God with the much larger group that is simply not associated with a specific faith tradition. It seems to make sense only if one is pushing the narrative that faith in America is rapidly declining. In fact, it might make one question whether or not Pew is unbiased vis-à-vis the issue of religion in America.

The big point of the most recent poll is that supposedly only 56% of Americans believe in the God of the Bible.

But the actual poll data give us many reasons to doubt the conclusions Pew is pushing.

For example, more than half of the people who don't believe in God believe in a higher power. That's a bit odd, because generally speaking, whether or not an individual associates a higher power with some sort of god, the classical definition of a god would cover such a higher power. Deists, for instance, believe in a god who doesn't intervene in the world, but they believe it's a god. Hence, in terms of how people normally discuss things, instead of 19% of Americans not believing in some sort of god, it's really only 10% who say that's the case.

Another interesting anomaly is that around 20% of people who identify as Christians say they don't believe in God as described in the Bible – including 9% of Evangelicals.

Evangelicals are known for their commitment to the Bible and for their belief in sola scriptura, so it's hard to imagine how many Evangelicals don't believe in Jesus.

Perhaps the wording of the survey question led to people who believe that Jesus is God to say they don't believe in the God of the Bible.

It's unclear why Pew didn't ask the more obvious question about whether or not people believe in Jesus or Yahweh.

This brings up another interesting point: the poll includes only Christians, Jews, atheists, agnostics, and the unaffiliated. There were no Muslims, Hindus, or Buddhists in the survey. This is odd, because while these groups are small, their combined total is about the same as the total for atheists, according to a previous Pew poll.

There are other sampling anomalies as well. For example, Pew's previous polls show Christians as about 72% of the population and “nones,” including atheists, around 23%. But in this poll sample, Christians are 63%, and nones are 28%. In addition, atheists are 6.4% versus the 3.1% in earlier Pew polls.

Such huge swings are unlikely in the short times between the polls, but they may be explicable by bias in the polling statistics. Of course, Pew is saying there are huge swings based on its polls, so if Pew does have a point of view it's trying to advance, distorting the sample population would tend to support that agenda.

Another sampling problem is that the educational achievement of the sample Pew used for this poll is very unrepresentative of the American population in general.

Roughly 42% of Americans have a high school education or less, 16% have some college, and around 31% have a bachelors degree or better. The remaining roughly 11% have associate degrees. Yet in this Pew poll, only 16% of respondents had at most a high school education, 30% had some college, while 54% had a college degree. Those with associate degrees weren't broken out in the Pew data.

Another apparently inconsistent result is that 77% of Americans believe they have been protected by God, including 4% of atheists and 30% of agnostics. How one can be protected by a God one says doesn't exist (atheists) or that one doesn't know exists (agnostics) is unclear. But it does show that the categorization used by Pew is not congruent with what the average person would use.

Given that people who believe in undefined higher powers, etc. are probably less likely to believe in a God who directly intervenes in the world – deists, for example – the fact that supposedly only 56% of Americans believe in the God of the Bible and 77% believe that God has actively protected them at some point seems a bit odd at best.

Similarly, 61% of Americans believe that God will judge them based on their deeds, including 17% of agnostics, 2% of atheists, and 44% of the religiously unaffiliated. The idea of God judging us on our actions is once again more commonly associated with Judeo-Christian beliefs than with belief in some unknown higher power.

The bottom line is that there are serious problems with this Pew poll. As such, its conclusions really can't be trusted.

Based on the culture in general, one would find it reasonable to believe that the percentage of Americans who take God seriously is declining. However, we know that the cultural elites and the media can create false impressions.

For example, prior to Rush Limbaugh starting his radio show, it was “obvious” from the culture that conservatives were a tiny minority. That's why Reagan's election was viewed as a bizarre fluke. More recently, the culture made it clear that no one was going to vote for Trump.

With Christianity being a key force acting against the unlimited power of government, the left has a strong motivation to demoralize Christians by convincing them that they are a rapidly shrinking minority.

Hence, it's possible that this latest Pew poll, like earlier ones (here and here), is in fact less an accurate assessment and more of a way for the cultural elites to demoralize people of faith. That doesn't mean that Pew intentionally distorted their results; it could be the result of unconscious bias or confirmation bias, where, upon seeing results that agreed with their beliefs, the pollsters didn't rigorously question their methodology.

If your friends bring this poll up, let them know there's a very good chance it's fake news.