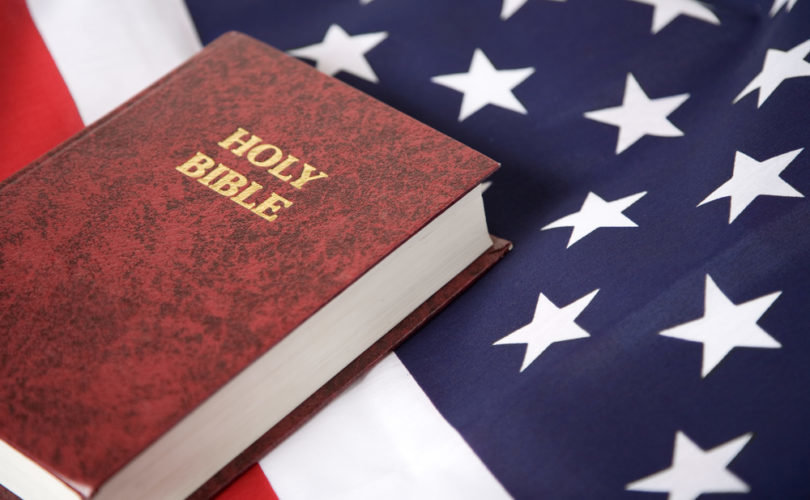 Bible laying on top of an American flag Shutterstock.com

(PJ Media) – The first time I met Jordan Peterson, we disagreed. He had just delivered a brilliant talk for the Society for Academic Freedom and Scholarship (SAFS), treating in part of the pros and cons of Liberal and Conservative political philosophy.

Where we disagreed involved what he considered the pejorative side of Conservatism. Peterson argued that Conservative thinking and practice were a noble endeavor, but regrettably focused on the concept of walls, a kind of insularity that tended to exclude much that was regarded as disruptive or troubling to a sense of unanimity and epistemological coherence; indeed, such novel intrusions were likely to be regarded as a species of “disease.” There could be something closed-minded about Conservative principles, a rejection of the strange, the innovative, the foreign, and the revitalizing effect of infusions from elsewhere.

Such a thesis seemed odd coming from a culture hero known for his courage in rejecting social justice groupthink and promoting the notion of personal obligation as a counterweight to runaway “rights.”

True, as Peterson wrote in 12 Rules for Life: An Antidote to Chaos – as if in contradiction to half his title – “chaos, possibility, growth and adventure” add to the intensity and meaningfulness of life, situating us “on the border between order and chaos.” But one must be careful how much chaos one lets cross the border into the constitutional order of both the self and the culture — and of the polity as well. As times have shown, the core Liberal/Left agenda of open borders (or as we now call it, globalism), in the realms of both practical life and ideological consensus, is an invitation to discord and misrule.

The segue from Peterson’s remarks to the catastrophe at the southern border is no doubt an unanticipated transition, but in my estimation a salient one. New elements are entering not only the nation but the culture as well, giving an injection of novelty that is not, pace Peterson, an invigorating but a destabilizing influence.

The breaching of the southern border by a torrent of illegal immigrants, as everyone who is still sane knows, is an unprecedented disaster. A nation without border controls is no longer a nation but a theme park “justified” by Liberal/Left preconceptions, a kind of free-for-all Disney World in which the rides and features gradually cease to work. A Magic Kingdom Park minus the magic, it is an anarchist’s wet dream and the dystopian project of the political Left. Chaos breaches the frontiers.

The rupture at the border is also a symbol of the widening fissures in traditional culture — the beliefs, assumptions, usages and norms we once took for granted. One recalls Leonard Cohen’s “Anthem,” where he sings of the “crack where the light gets in,” – a musical rendering of Peterson’s observations, which turns out to be in far too many cases, pace my old and honored friend, a rift where the darkness gets in. And the Left, as history has proven, brings political and cultural darkness wherever it has prevailed.

Dennis Prager has written what amounts to an obituary for the nation and the modern West: “Everything the Left touches it ruins.” He scrolls down the list of disciplines, monuments, democratic entitlements, social structures, and institutions that have crumbled as the cultural barriers that once “conserved” the nation and its people have been leveled: art, music, journalism, education, the family, childhood, race relations, sexual differentiation, the military, sports, the First Amendment–all have been rendered derelict, all now signs of “the great American tragedy.”

In an article titled “Third Worldizing America,” Victor Davis Hanson similarly points to the “crimes” of the Left, the “utter breakdown of the law,” and the dissolution of the conceptual borders of the country sponsored by historical distortions like the 1619 Project.

As he writes in The Dying Citizen, “Citizens differ from visitors, aliens, and residents passing through who are not rooted inside borders where a constitution and its laws reign supreme.” (Italics mine.) For a nation to prosper, citizens “must honor the traditions and customs of our country,” and recognize the necessity of “delineated and established borders” if they are not to find themselves living in a social and political wilderness. “Aliens,” to use Hanson’s term, whether foreign or domestic, illegal immigrants or tribal Leftists, are cultural interlopers whose influence is destructive.

Of course, walls have gates that may be opened, and should be opened, for purposes of commerce, travel, knowledge and replenishment — namely, Peterson’s “gripping and meaningful” irruptions into the citadel. The gatekeepers, however, must be responsible, informed, judicious and loyal to the people they represent and to the founding traditions of the nation. They must know when to open the gates and when to shut them. They must labor for the advantage of their citizens.

Such was the intention of the MAGA policies of the Trump administration, which worked to reinstall the supporting walls of nation and culture, that is, to aid working families; set the economy on a strong footing, with “low unemployment, and wage increases across every demographic,” as Julie Kelly writes in Disloyal Opposition; rebuild the military; thwart a “swamp” of domestic enemies; establish a perimeter wall at the porous border; and implement rational immigration protocols.

An initiative of this nature is not a kind of protectionist tariff wall built to exclude new ideas or healthy competitive forces in order to profit a guild of candlemakers by prohibiting windows, as in Frédéric Bastiat’s famous fable in The Economics of Freedom. It is, rather, an effort to retain and foster a productive national identity and a significant degree of cultural integrity while remaining proportionately open to new ventures and discoveries.

Today, things have changed for the worse. The walls, physical, moral and customary, that keep the culture intact and shield its citizens from the incursion of parasites and the derelictions of the Left have collapsed and will need to be raised again if the nation is to flourish as it once did. Citizens can no longer be indifferent to the plight of the present, as if they were members of the Church of Laodicea whom John the Elder castigated in Revelation (3:15) as “neither hot nor cold.” Citizens will need to recover their republican temperature if the community is to survive.

Hanson believes that with an engaged citizenry restoration is possible. “Contemporary events,” he continues, “have reminded Americans that their citizenship is fragile and teetering on the abyss—and yet the calamities can also teach, indeed energize, them to rebuild and recover what they have lost.”

In The Dark Side of the Left, Richard J. Ellis, a Leftist critical of the Left, is equally insistent on the necessity for national coherence. “In such a society,” he writes, “the more hierarchical visions of ordered community will continue to resonate in American life. And rightly so.” Leftists, however, are like the magistrates in Constantine Cavafy’s celebrated poem “Waiting for the Barbarians” whose gates are opened wide, and who eagerly await the arrival of the barbarians and are disappointed when they fail to appear.

What all this means, obviously, is that the wall at the southern border will need to be completed, and soon. No less important, the interior walls of the culture that safeguard intellectual, creative, family, informational, medical, legislative, personal, market and commissary relations will need to be rebuilt. Both species of wall, material and cultural, must be erected at the same time if the nation is to be “conserved.”

“Good fences make good neighbors,” as Robert Frost’s churlish neighbor in “Mending Wall,” a benighted old farmer who “moves in darkness…like an old-stone savage,” was fond of repeating. Frost was, on the whole, of the opposite persuasion:

Something there is that doesn’t love a wall,

That wants it down.

Frost was wrong and his neighbor was largely right — certainly in the contemporary social and political context. Something there is that sometimes loves a wall, needs a wall to keep out vandals, barbarians and fifth columnists and to maintain the boundaries, external as well as internal, that allow for secure and ordered life. Good fences make good citizens.