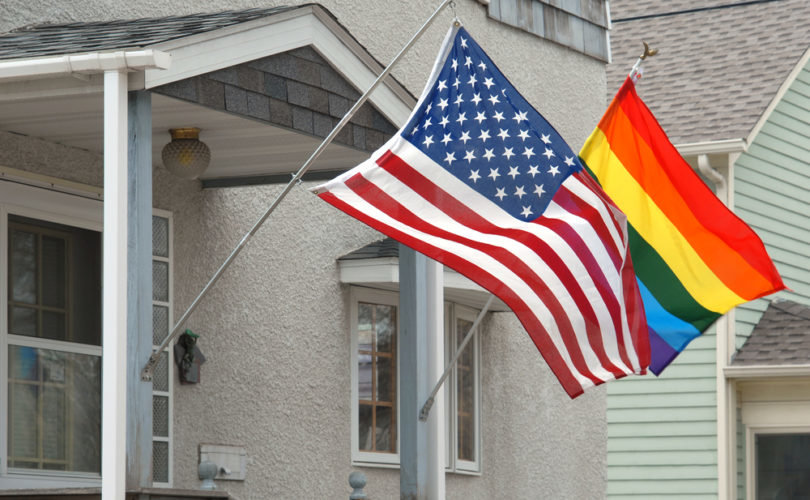 April 27, 2015 (CNSNews.com) — Same-sex “marriage” – the legal recognition of same-sex relationships – is one of the most contentious issues in America. Laws, constitutional interpretation, and the future of religious liberty may well rest on what nine justices decide two months from now.

Many observers seem to believe that the Supreme Court will rule in favor of redefining marriage. And while many on all sides of the debate, especially those who are undecided, believe this will bring cultural peace, evidence around the world points in the exact opposite direction.

Rather than settle animosity and ease cultural tensions, the advent of same-sex “marriage” will lead to the repression of religious freedom and determination to root out dissent to the gay rights doctrine. At LifeSiteNews, we have watched this play out for nearly two decades in 17 countries around the world – and America is next.

A prime example is Canada. Same-sex “marriage” passed in 2005. Similar to European countries which have done so, there has been a relentless pursuit of the minds of children against the wishes of their parents. Schools, both public and private, were first mandated by law to have gay-straight alliance clubs under the auspices of anti-bullying. Then, sex-education, teaching the normalcy of homosexual sex, was given to children without parents being permitted to opt their children out of the classes.

We have arrived at this state of affairs because of the silence of Christian pulpits on sexual matters, and the concomitant shouting from every secular pulpit, screen and book. Even the current discussion around same-sex “marriage” in the United States reveals a grave reluctance to speak about the heart of the issue – homosexual sex. Rather, arguments are made about the goodness of natural marriage, about its benefit to children, and its unchangeable character.

From reporting on the subject every day for so many years, we knew that the struggle for same-sex “marriage” has very little to do with marriage. In fact, until just recently, gay activists didn’t even want to be “married” to each other. Most had no interest in the constraints that such a formalized union would entail in terms of exclusive partnership.

However, the leaders among the activists convinced the movement that they must attain marriage as a societal stamp of approval to homosexual behavior. And, frankly, they have largely succeeded.

Today, in many of the nations where same-sex “marriage” is law, opposition to it is seen as akin to racism. It is seen falsely as an animosity against someone for who they are—an unwillingness to recognize the human dignity of a class of persons due to an immutable characteristic.

However, that false perception is due to a purposeful agenda to conflate animosity against homosexual sex acts with animosity against persons who experience same-sex attraction. The ancient Christian teaching to “love the sinner and hate the sin” is an impermissible distinction in the minds of some. It is, however, the key to understanding the majority of the opposition to same-sex “marriage.”

The plain truth of the matter is that opposition to same-sex “marriage” is rooted not in hatred and bigotry, but just the opposite – in love. Like parents who do not allow children to behave dangerously without lovingly correcting them, opponents of same-sex relationships are hoping to save people with same-sex attractions from severe physical, psychological, and spiritual harm.

Just as, out of love and concern for their children’s welfare, parents must correct and discipline, despite the protests they may get in return, any true believer in marriage, natural law and science must lovingly correct their fellow man.

In other nations, the perception that opposition to same-sex “marriage” is based upon bigotry has led to laws that violate religious liberty, parental rights and freedom of speech. This is why those who oppose same-sex “marriage” must present their reasoning as based on love and concern for the welfare of those in homosexual relationships, in addition to concerns for children and society itself. And there is ample evidence on which to base that concern in the numerous studies showing the grave harm of homosexual sex to both body and psyche.

When I’ve spoken of these findings at conferences around the world, some have questioned if the researchers who showed these harms weren’t themselves biased by anti-gay sentiment. And so I’ve taken to carrying with me on my phone the quotes of the late Canadian gay activist Gens Hellquist, whose testimony proves the harms of gay sex better than any study ever could.

Speaking a few years after the passage of same-sex “marriage” into law, Hellquist was seeking more healthcare dollars for the LGBT community. “We have one of the poorest health statuses in this country,” he said. “Health issues affecting queer Canadians include lower life expectancy than the average Canadian, suicide, higher rates of substance abuse, depression, inadequate access to care and HIV/AIDS.”

He concluded: “Now that we can get married everyone assumes that we don't have any issues any more. A lot of the deaths that occur in our community are hidden, we don't see them. Those of us who are working on the front lines see them and I'm tired of watching my community die.”

Pastors and preachers must take up this call to speak the truth in love, for without this approach, the public will be led to believe that those opposed to same-sex “marriage” are indeed haters needing to be stopped with the force of law. Love is the most powerful force in any argument, and gay “marriage” pushers have used it very effectively. As Hillary Clinton tweeted as she fought religious freedom laws in Indiana: “We shouldn't discriminate against ppl bc of who they love #LGBT”

The truth is that those who oppose same-sex “marriage” are showing a deeper love, as any parent does when instilling difficult discipline. We have enough love and concern for those with same-sex attraction to warn them not to engage in behaviors proven to be very harmful. We won’t encourage people to enter into such harmful behaviors by redefining marriage to encourage it, nor will we allow our children to be indoctrinated into regarding it as a healthy and safe alternative lifestyle.

We have failed so far to get this message of love out to the public. I will not be surprised if the Supreme Court approves of same-sex “marriage” – and I will be even less surprised to see a subsequent  crackdown on religious freedom, as already seen in states like California and Colorado.

Pope Benedict XVI predicted it a decade ago. Observing the international trends, the then-Cardinal said “very soon it will not be possible to state that homosexuality, as the Catholic Church teaches, is an objective disorder in the structuring of human existence.”

Reprinted with permission from CNS News.