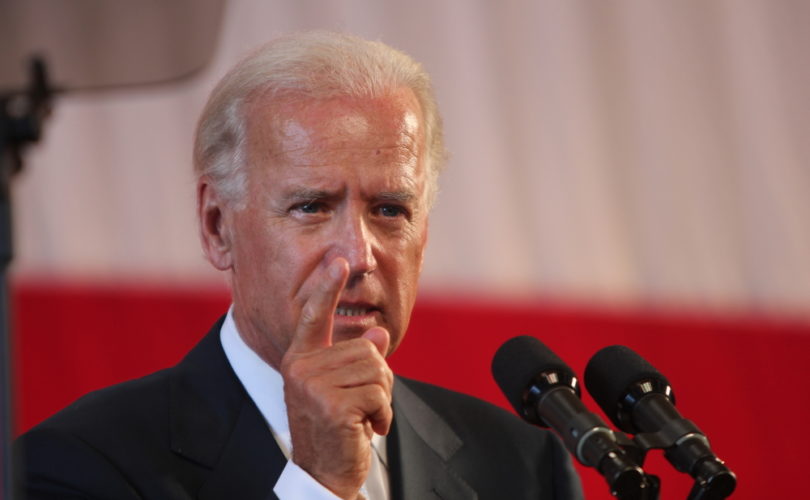 ISTANBUL, September 16, 2015 (LifeSiteNews) – A firestorm of controversy has erupted in the Orthodox Church over its Ecumenical Patriarch planning to honor vice president and possible presidential candidate Joe Biden.

Vice President Biden is scheduled to receive the highest award bestowed by the Greek Orthodox Church, the Athenagoras Human Rights Award. The award will be presented at the organization's annual banquet Saturday, October 17, at the New York City Hilton Hotel.

In December 2011, Biden became the first sitting vice president to visit what is called “the Phanar,” which means “lantern” and refers to the Ecumenical Patriarch's base of operations. In November 2014, Biden returned for a second official visit.

Those two visits drew international attention to the plight of the Phanar, which for centuries has been oppressed under the yoke of Islam, in ancient times in the form of the Ottoman Empire and in more recent decades in the form of the Turkish government. Islamic oppression has led nearly all Orthodox Christians to flee the region – once the center of world Christianity – and state restrictions are so tight that many observers say the Ecumenical Patriarch is “a prisoner in his own home.”

It is no surprise, then, that the Ecumenical Patriarchate welcomed the international attention that a sitting vice president of the United States brought. Biden has spoken publicly to defend the “religious freedom and the right of the Greek Orthodox Church to control its destiny free of the influence of any government,” “the right to reopen Halki Seminary,” and “the protection of the holy places and the heritage sites in Turkey.”

But many leading Orthodox clerics have expressed outrage that such a high award will be given to a member of an administration that has fought the basic moral fabric of the United States. George Michalopulos, head of the most popular Orthodox blog on the internet, told LifeSiteNews, “I am appalled at how the Greek Orthodox Archdiocese is so slavish to hear the praises of the marketplace, that they would bestow an award on the vice president of the most Anti-Christian administration in history.”

While the leading Greek cleric in the United States, Archbishop Demetrios of New York, speaks of Biden's “love of liberty” and “sense of justice,” other Orthodox leaders point out the contradiction of giving a religious freedom award to an administration that drew up the forced abortion and sterilization coverage mandate of Obamacare and the administration's extreme promotion of abortion – to the point of officially labeling pro-lifers “potential terrorists” and trying to force the Little Sisters of the Poor to pay for abortion insurance.

Furthermore, the vice president has demonstrated an extreme pro-abortion position throughout his political life – despite professing Roman Catholicism. During Senate hearings regarding the nomination of Robert Bork to the U.S. Supreme Court, Biden led the opposition in the name of “a woman's right to choose [abortion].”

Author Patrick Henry Reardon, senior editor of Touchstone journal and author of Christ in the Psalms, said, “It is a disgrace and a scandal that any group, especially an organization claiming adherence to the Orthodox Church, would give a human rights award to Vice President Biden, who has shown consistent indifference – not to say, hostility – to the lives of unborn infants during his whole political career.”

Biden's award will be bestowed by a group called “Archons,” who are supposed to “defend and promote the Orthodox Christian faith and tradition.” Significantly, they vow to promote “the human race's inalienable rights wherever and whenever they are violated.” How this commitment conforms to the honoring of an abortion-supporting politician is unclear.

Any pro-abortion position is the antithesis of Orthodox Christian morals. And yet Archons of the Ecumenical Patriarchate, often chosen for their financial contributions, are theoretically supposed to “conform faithfully to the teachings of Christ and the doctrines, canons, worship, discipline, and encyclicals of the Church.”

The extended comments to LifeSiteNews of Dr. Alexander F. C. Webster, a retired Army chaplain and Orthodox priest in Stafford, Virginia, are shared by many Orthodox clergy:  “Vice President Joe Biden deserves thanks of every Orthodox Christian … for his staunch defense of the fundamental rights of the Ecumenical Patriarchate.”

“But,” Webster continues, “the vice president does not merit such an august, unique honor from the Ecumenical Patriarchate as The Athenagoras Human Rights Award. … Mr. Biden's 'human rights' record on abortion, the most important moral issue in the last forty-two years, is indefensible.”

Webster explains, “Despite conceding in 2007 the key claim of his own Roman Catholic Church that human life begins at conception, … Mr. Biden, as a U.S. senator, relentlessly supported abortion on demand – that is, for any reason at any time until the moment of birth – with one exception: his vote in favor of the Partial-Birth Abortion Ban Act in 2003. … That one good decision can hardly atone for Mr. Biden's morally incoherent enabling of the wanton destruction of what he himself acknowledges as innocent human life.”

Father Seraphim Holland, a well-known Russian Orthodox priest in Texas, lamented that some Orthodox leaders are “infected with the stupidity that is unique to the world, vain, and ambitious.” Referring to the honoring of the vice president, Holland commented to LifeSiteNews, “These kind of anti-Christian activities should be brought up in church assemblies, until security tosses out the brave priests who actually show they are men and not cowards.”

Holland concluded, “I do not want to deal with those that have blood on their hands.”

The honoring of secular leaders whose moral stands are less than exemplary is not new to the Greek Archdiocese of America. In 1988, during the presidential race, the Greek archdiocese broke its own rules of non-political advocacy by endorsing Mike Dukakis for president, even though Dukakis's platform championed abortion. The reason? Dukakis was of Greek descent.

Dukakis isn't the only immoral Greek to receive honors, awards, and endorsements from the Greek archdiocese. Senator Paul Sarbanes of Maryland was one of the most fervent proponents of abortion in the entire U.S. Senate, and yet he, being Greek, was warmly and publicly greeted by the Ecumenical Patriarch in 1997 as “one man who sums up … the highest Christian ideals.” Meanwhile, Sarbanes supported legislation permitting medical experiments on aborted children as “fetal tissue research.”

Another “honored” Orthodox politician was Olympia Snowe of Maine, who, with Sarbanes, officially supported infanticide twice: on May 20, 1997, and again on September 18, 1998, voting against the ban on partial-birth abortion.

In 1998, during his visit to the United States, the Ecumenical Patriarch – without announcement, and to the surprise of the audience at New York City's Greek cathedral – vested George Stephanopoulos as an Archon, despite the fact that Mr. Stephanopoulos served the most pro-abortion president up until that time and himself defended the killing of babies in the womb.

“We weren't told what was happening up front, until after it was over,” one 1998 attendee stated. “We didn't even know who it was that was being given some sort of recognition.  Had we been told, some of us would have protested right then and there.”

Author Peter A. Papoutsis tells LifeSiteNews, “There are many rank-and-file Greek Orthodox that do not approve, and never have approved, of stunts like this.” Papoutsis concludes, “The Archons care more about the Ecumenical Patriarch and his turf than the Gospel of Christ. This is how it has always been. Money controls, not Christ. Political power controls, not the Gospel.”

The controversy is not just within the confines of the Orthodox Church. While Archon national commander Dr. Anthony J. Limberakis praises Biden's “love of freedom and … the rights of all oppressed people,” Catholic priest Father Frank Pavone, national director of Priests For Life, notes, “It is incorrect to say that the vice president stands for all oppressed people. He and his party have failed to speak up for and protect the most oppressed of all, the unborn, the children in the earliest nine months of their lives.”

Father Pavone prefaces his comments this way: “I am pleased to see when any leader expresses his support for the full freedom of the Ecumenical Patriarchate to pursue its mission, and for the religious freedom of all believers.” However, the pro-life leader adds, “to be successful in our defense of human rights, we must be consistent in our defense of human rights, and not exclude any, much less the most fundamental one and the condition for all the others: life itself.”

Perhaps this is why so many Orthodox Christians report skepticism at best toward the Ecumenical Patriarch's recent efforts to unite Orthodox in America. Not only is the Ecumenical Patriarch seeking to consolidate the various “jurisdictions” under himself, but his publicly stated concerns seem to be without an understanding of the most important moral issues facing Western civilization – or without a moral compass altogether.

Instead of weighing in on the cultural abandonment of God, or on abortion, euthanasia, destructive embryonic stem cell experimentation, homosexuality, pornography, transgenderism, or rampant fornication and corruption in his own ranks, pronouncements from the Patriarchate demonstrate an overriding concern either for the Hellenization of America or for the Ecumenical Patriarch's desire to become known as an environmentally concerned “Green Patriarch.”

There isn't even a concrete concern for evangelism – just a sense of urgency to teach Sunday school children how to conjugate Greek verbs and learn the superiority of Greek cultural contributions to society.

With leaders like that, it is no wonder Orthodox faithful are looking elsewhere for spiritual direction.

Joe Biden, Catholics for Choice and the art of speaking Catholic nonsense
Colorado bishop: Biden should not receive Communion in my diocese