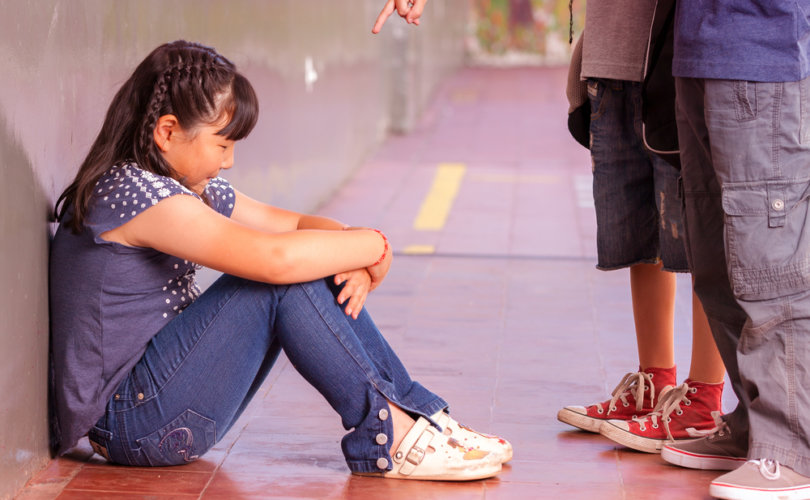 November 25, 2016 (LifeSiteNews) – There is an anger problem in many schools.  Some students exhibit harmful, excessive anger directed both at fellow students and teachers and such anger-expression is widely reported to interfere with the ability to teach and to learn.  Certain students are often singled out and become scapegoats of this misdirected, undeserved anger.

Current anti-bullying programs in Catholic schools are often ineffective.  They rarely address the most important issues for those students showing bullying behaviors. These issues include: a) uncovering the origins of his/her anger, b) insisting on a mental evaluation of those who bully, and c) making a commitment to resolving the anger as a condition for staying in the school.

The persistent flow of intense anger from one student toward another can:

Other conflicts in those who are bullied, which we cite in the child chapter of our APA textbook, Forgiveness Therapy, include: an increased risk of self-harm in late adolescence (Lereya, 2013); increased risk for suicidal ideation and suicidal/self-injurious behavior in preadolescence (Winsper, et al., 2012); a precursor or marker on the trajectory towards the development of Borderline Personality Disorder symptoms in childhood (Wolke, et al. 2012); an increased risk of psychotic symptoms in early adolescence, which nearly doubles among children who were victims of bullying at age 8 or 10 years (Schreier, et al., 2009) and social isolation, loneliness, psychosomatic symptoms and fears of going to school.

The seriousness of the psychological harm from childhood bullying was reported in a 40-year study of bullying from the American Journal of Psychiatry. Those bullied in childhood had increased levels of psychological distress at ages 23 and 50.  Victims of frequent bullying had higher rates of depression, anxiety disorders, and suicidality nearly four decades after their trauma.  Childhood bullying victimization was associated with a lack of social relationships, economic hardship, and poor perceived quality of life at age 50 (Takizawa, R., 2014).1

Given the extent of emotional conflict in youth arising from numerous sources, including the divorce, narcissism and pornography epidemics, as well as violent video-gaming, it is important that parents ask their children how they are being treated in schools because most children who are bullied do not tell their parents.

The need to monitor what occurs with peers was highlighted by an American study of 10,000 adolescents in which 49% of the youth met the criteria for one psychiatric disorder (Merikangas, K.R., et al, 2010).  It is important to understand the research that demonstrates that excessive anger is highly prevalent in all psychiatric disorders with irritability being a criterion for making the diagnosis of both anxiety and depressive disorders.

When parents identify that a child is being bullied at school, the parent should report this both to the teacher and the school principal.

In our consultation with Catholic schools, the most effective approach we have seen to address this serious problem of children at-risk for serious psychological harm is to recommend to parents, principals, or pastors, who should have a major role in protection of children in their schools, that a child who consistently overreacts with intensive anger and bullies other children should be suspended from school and be required to have a mental health evaluation.

The parents should be reassured by the principal and pastor that the child will not be permitted back into the classroom and place innocent children at risk until a treatment plan is initiated for the excessive anger in those who bully.  Not infrequently, this student’s anger is an unconscious cry for help, which should not be ignored but addressed.

Over the past forty years with our nationally recognized expertise in the treatment of uncovering and treating excessive anger, we have seen a marked reduction in the anger of those who bully through family therapy, forgiveness therapy and, at times, the use of medication.

Principles and pastors often will not allow a bullying child to return to the classroom until this process begins and the child commits to work on his/her excessive anger.

If a child with such entrenched problems refuses to change, then it is vital that other children be protected and this might mean, in some cases and after careful discernment, expelling the offending child from the Catholic school.

I am aware of a number of Catholic educators who encourage their students to think about forgiving at the beginning of the school day.  The purpose is to try resolve the anger which some students may be unconsciously or consciously bringing into the school from hurts or injustice in the family or peer group.  These educators have told me that they observe the usefulness of this forgiveness exercise, which helps the students from overreacting emotionally during the school day.

My co-author of our APA textbook, Forgiveness Therapy, Dr. Robert Enright, U.W.-Madison, is the leading forgiveness researcher and educator.  He has developed a complete set of professionally-produced guides for forgiveness education, from pre-kindergarten through grade 12.  These have been used in over 30 countries worldwide and research has shown their effectiveness for reducing anger in children as young as age 6.  The results include studies in Milwaukee’s central-city, Belfast’s interface areas, and Seoul, Korea.  These studies now are published in peer-reviewed journals.

Forgiveness therapy has been demonstrated to be effective in females, victimized by those who bully, by diminishing anger and hostile retribution, reducing aggression and delinquency, and improving academic performance (Par, et al., 2013).

Mistakes by Principals and Teachers

We have treated both teachers and students who have been verbally abused and/or threatened by students or who have been physically harmed by students’ thrown objects.  There is a double trauma when Catholic school administrators fail to take any effective action against the abuser(s). The administrators’ failure in this regard places teachers and students at-risk for physical and psychological harm.

One of the hallmarks of Catholic Education is to equip the poor and to teach different people to live together in peace.

Reasons for the Failure to Correct

In our forty years of clinical experience with youth and adults the major reasons for failing to correct and protect others from the excessive anger in those who bully are:

The Church has been going through a very painful time of purification because of the failure of bishops, priests, and Catholic educators to protect youth from the risk of sexual abuse, primarily of a homosexual nature (Fitzgibbons, R., et al. 2011).  The post-crisis response has been positive overall with the important exception of the glaring failure to identify the important risk factors of severe narcissism and male insecurity in potential abusers of youth, particularly males.

Priests who have been accused of placing youth at-risk have been required to take leave from their ministry and undergo an evaluation according to the norms established by the Dallas Charter.

In justice, principals and school administrators who persistently demonstrate negligence in protecting youth from the serious psychological harm of bullying also should be required to be evaluated in a similar fashion.

The Church cannot fail to act in justice when youth in Catholic schools, as well as educators, are placed at risk of serious harm.

Rick Fitzgibbons, MD, is a psychiatrist the director of the Institute for Marital Healing outside Philadelphia and has worked with hundreds of couples, families and youth over the past 40 years. He has written on resolving anger in the classroom in the American School Board Journal and on resolving conflicts in marriages and youth in Forgiveness Therapy, APA Books. He was an adjunct professor at the Pontifical John Paul II Institute for Studies on Marriage and Family at Catholic University and is a board member of the International Institute for Forgiveness.