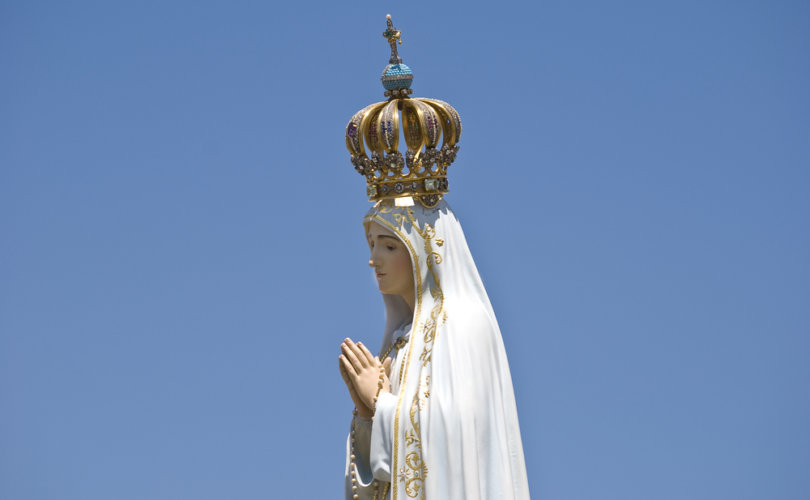 Statue of Our Lady of FatimaShutterstock.com

Editor's note: Friday, October 13 marks the 100th anniversary of Fatima’s “miracle of the sun.” The day commemorates the last apparition of Our Lady of Fatima to the three children and the fulfillment of the promised “sign.” Tens of thousands of people, including atheists and those who had come to mock the children, witnessed the sun dancing and emitting radiant colors in the sky. LifeSiteNews is pleased to bring you this reflection on why Our Lady's message is still important today.

October 12, 2017 (LifeSiteNews) — In the last moments before he died on the cross, “Jesus saw his mother, and the disciple whom he loved standing near, and he said to his mother, 'Woman, behold, your son!'” (John 19:26). In giving the disciple John to the care of his mother, Jesus also entrusted every human being to Mary’s loving care, so that she can help us turn our hearts to the Lord. And Mary, in response, says to each of us: “Do whatever he tells you!” (John 2:5).

This is Mary’s constant word to her children, repeated throughout the centuries in various private apparitions, including the apparitions at Fatima, Portugal, of which we are celebrating the 100th anniversary this year.

From May 13th to October 13th, 1917, Mary appeared six times to three shepherd children, Lucia Santos and Jacinta and Francisco Marto. Her message focused on seeking the conversion of “poor sinners,” through much sacrifice and prayer, especially the rosary, and through devotion to Mary’s Immaculate Heart.

Our Lady asked for Russia’s consecration, promising that unless the birthplace of Communism be converted, it would “spread her errors throughout the world, causing wars and persecutions of the Church.”

Mary’s last words to the children on October 13th were, “Do not offend the Lord our God any more, because He is already so much offended.”

The message of Our Lady of Fatima, although a private revelation that does not add anything to God’s complete revelation in Jesus Christ, has been accepted and promoted by the church, precisely because it conforms to the central call of Jesus: “Repent, and believe in the gospel” (Mark 1:15).

It is, says Saint John Paul II, “in the light of a mother's love [that] we understand the whole message of the Lady of Fatima. The greatest obstacle to man's journey towards God is sin, perseverance in sin, and, finally, denial of God. The deliberate blotting out of God from the world of human thought. The detachment from him of the whole of man's earthly activity. The rejection of God by man. …Can the Mother who with all the force of the love that she fosters in the Holy Spirit desires everyone's salvation keep silence on what undermines the very basis of their salvation? No, she cannot. And so, … the message of Our Lady of Fatima … invites to repentance. It gives a warning. It calls to prayer.”

Mary’s message of the need to return to her Son was given not only for those in Portugal in 1917. Rather, it is addressed to all, and is a message specially given for our time.

“In the end, my Immaculate Heart will triumph,” she said. This promise has yet to be fulfilled.

At Fatima, Mary made two specific requests of her children, by means of which she helps us to overcome sin and discord in a most powerful way.

First, Mary asked that we “pray the rosary every day” so that through it, she can help us to learn Christ, to be conformed to Christ, to pray to Christ, and finally to proclaim Christ.

In the words of Saint John Paul II, “Consecrating the world to the Immaculate Heart of Mary means drawing near, through the Mother's intercession, to the very Fountain of life that sprang from Golgotha. This Fountain pours forth unceasingly redemption and grace. In it reparation is made continually for the sins of the world. It is a ceaseless source of new life and holiness. … And so she calls us. She not only calls us to be converted: she calls us to accept her motherly help to return to the source of Redemption.”

On June 13, 1929 Lucia received another apparition which sums up the whole message of Fatima.

Suddenly the whole chapel was illumined by a supernatural light, and above the altar appeared a Cross of light, reaching to the ceiling. In a brighter light on the upper part of the Cross, could be seen the face of a man and his body as far as the waist; upon his breast was a dove of light; nailed to the Cross was the body of another man. A little below the waist, I could see a chalice and a large Host suspended in the air, onto which drops of blood were falling from the Face of Jesus Crucified and from the wound in His side.

These drops ran down onto the Host and fell into the chalice.

Beneath the right arm of the Cross was Our Lady and in her hand was her Immaculate Heart. (It was Our Lady of Fatima, with her Immaculate Heart in her left hand, without sword or roses, but with a crown of thorns and flames). Under the left arm of the Cross, large letters, as if of crystal clear water which ran down upon the altar, formed these words: “Grace and Mercy.”

Every pope, since Pius XII, has encouraged devotion to Our Lady of Fatima. In our own time, Pope Francis has granted an opportunity to gain a plenary indulgence during the centenary year of the apparitions at Fatima.

For those who cannot visit the shrine of Fatima itself, “the pious faithful who visit with devotion a statue of Our Lady of Fatima solemnly exposed for public veneration in any church, oratory or proper place during the days of the anniversary of the apparitions, the 13th of each month from May to October (2017), and there devoutly participate in some celebration or prayer in honor of the Virgin Mary” can gain a plenary indulgence if the usual conditions are met.

At Fatima, Mary wished to bring to us the grace and mercy of God won for us through the death and resurrection of Jesus Christ. Even now, 100 years after the apparitions, let us turn to Our Lady of Fatima, for she is still calling us to accept her help to return to her Son.

Erin Baklinski has a Masters in Theology. She is married and the mother of seven children (with three in heaven). She and her husband live in Canada.