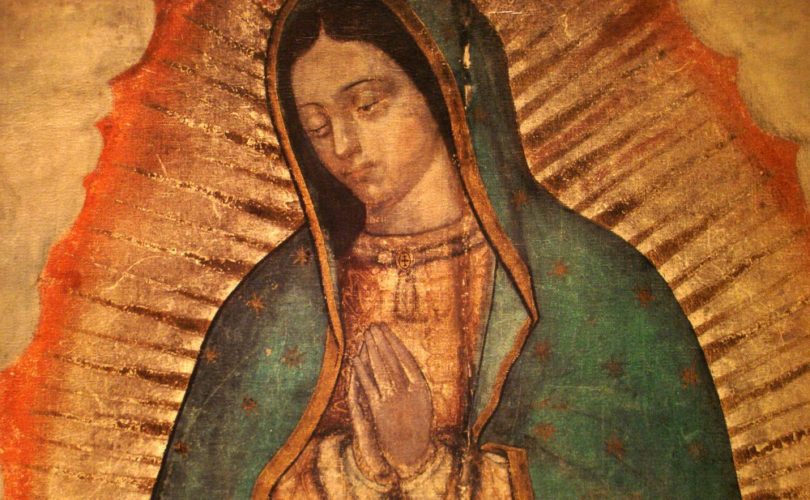 December 11, 2015 (LifeSiteNews) — One of the greatest Christian communicators in American history was Archbishop Fulton J. Sheen. Trained in top level theology, he chose to use his talents to convey the complex truths and deep human insights of Catholic thought to a wide American public. In the 1950s, his prime-time TV religious show (imagine that!) “Life Is Worth Living” had higher ratings than its rival, “The Milton Berle Show,” a fact which Sheen attributed to his fine top-notch Jewish writers: Matthew, Mark, Luke, and John.

One of the most profound reflections Sheen ever offered was about the tragic gulf that exists between the person each of us should be, and the person we really are. As he wrote in The World's First Love:

God, too, has within Himself blueprints of everything in the universe. As the architect has in his mind a plan of the house before the house is built, so God has in His Mind an archetypal idea of every flower, bird, tree, springtime, and melody….

But it is not so with persons. God has to have two pictures of us: one is what we are, and the other is what we ought to be. He has the model, and He has the reality: the blueprint and the edifice, the score of the music and the way we play it. God has to have these two pictures because in each and every one of us there is some disproportion and want of conformity between the original plan and the way we have worked it out. The image is blurred; the print is faded. For one thing, our personality is not complete in time; we need a renewed body. Then, too, our sins diminish our personality; our evil acts daub the canvas the Master Hand designed. Like unhatched eggs, some of us refuse to be warmed by the Divine Love, which is so necessary for incubation to a higher level. We are in constant need of repairs; our free acts do not coincide with the law of our being; we fall short of all God wants us to be. St. Paul tells us that we were predestined, before the foundations of the world were laid, to become the sons of God. But some of us will not fulfill that hope.

There is, actually, only one person in all humanity of whom God has one picture and in whom there is a perfect conformity between what He wanted her to be and what she is, and that is His Own Mother. Most of us are a minus sign, in the sense that we do not fulfill the high hopes the Heavenly Father has for us. But Mary is the equal sign. The Ideal that God had of her, that she is, and in the flesh. The model and the copy are perfect; she is all that was foreseen, planned, and dreamed.

Sheen speaks of Mary as she is seen in the Catholic and Orthodox traditions, free of any personal sin, perfectly pleasing to God in all the decisions she has made, through the saving grace of Christ. Hence Mary is simply the perfect Christian, the one merely human being whose earthly image is exactly what God had in mind for her. She is in that sense a window into the very mind of God.

And that window pours light out for the rest of us, stumbling in our uncertainties and sins. Over centuries, Catholics have believed that Jesus has sent His mother from time to time to appear to certain people, to offer encouragement, or a warning, or to call us to more fervent prayer. Typically, these “apparitions” have been to the poor, the weak, the forgotten in society, but the words of the mother of God have sometimes changed the fate of nations. That is what happened in Mexico, in early December 1531, when an Indian peasant named Juan Diego, one of the few who had followed the Spanish missionaries who had accompanied the conquistadors into that country, was climbing the hill of Tepeyac. At the top

he saw a brilliant light on the summit and heard the strains of celestial music. Filled with wonder, he stopped. Then he heard a feminine voice asking him to ascend. When he reached the top he saw the Blessed Virgin Mary standing in the midst of a glorious light, in heavenly splendor. The beauty of her youthful countenance and her look of loving kindness filled Juan Diego with unspeakable happiness as he listened to the words which she spoke to him in his native language. She told him she was the perfect and eternal Virgin Mary, Mother of the true God, and made known to him her desire that a shrine be built there where she could demonstrate her love, her compassion and her protection. “For I am your merciful Mother,” she said, “to you and to all mankind who love me and trust in me and invoke my help. Therefore, go to the dwelling of the Bishop in Mexico City and say that the Virgin Mary sent you to make known to him her great desire.”

Mary did not speak Spanish, or wear the courtly clothes of the conquerors. Instead she appeared as a woman whom Juan Diego might have seen in any village. But she spoke of the love of God for the Mexican people, in a way that no foreign friar could hope to do. So Juan Diego dutifully marched off to the bishop, Fray Juan de Zumarraga, who heard Juan Diego's case, but did not believe him. Juan Diego returned to Tepeyac Hill to pray, and Mary sent back to bother the bishop. At the second meeting, the bishop suggested that Juan Diego ask for some sign of proof. A few days later, the Virgin appeared to Juan Diego and told him to gather roses and bring them to the bishop. Juan Diego was astonished to see, in the midst of winter, an explosion of unfamiliar flowers all around him. He gathered them in his humble tunic (called a “tilma”) and carried them to the bishop's palace.

Bishop Zumarraga was stunned by the flowers, of a breed which grew only in his native region of Spain. He was even more taken aback by what had happened to Juan Diego's tilma: It bore a magnificent, mysterious image of the Virgin Mary, pregnant with Jesus. He was convinced. So were the native people of Mexico, who hearkened to the story and flocked to the shrine that Bishop Zumarraga built in Guadalupe, which enshrined the mysterious tilma—an ordinary garment, made of cheap materials that typically decay in just a few years, which has never aged or lost its luster over the next 500 years.

That's a lovely story. But it is much more than that. The image of Mary and Jesus that appeared on that tilma is in fact a kind of book—a theology text that teaches us critical lessons that modern man has forgotten. First of all, the image teaches about human dignity, and where it comes from. If Mary is a perfect reflection of God's vision of her in his own mind, then in this supernatural portrait we have a picture of how God sees mankind: More important than all of nature, since Mary stands on top of the moon, is backlit by the sun, and clothed in the stars of heaven. The human person, which our Culture of Death treats as a means to pleasure and power, is in fact much more important than the rest of the created universe.

What gives us such dignity and importance? Only the grace of God. Mary's head is not turned by her glory; in fact it is bowed in prayer. She knows that all her importance derives from her Son, that all her virtues are only the fruit of His grace. We only fully retain our dignity when we unite our will with God's, and obey His plan for us. It is perfect obedience to the promptings of grace, not power, learning, or knowledge, that elevates a person. When we try like Satan to rise against God's will, we degrade ourselves—as our culture today has diminished the sanctity of life and the value of self-sacrifice, pretending to elevate man while in fact reducing him to the level of just one more primate.

This message might seem abstract, or unconvincing to modern people. But remember the original audience to whom the Virgin appeared in Mexico: The Indian people of Mexico had for centuries been subject to the brutal regime of the Aztecs, who believed in a cult of dark and desperate gods, that could only keep themselves and the universe alive if they were fed by human sacrifice. When the bold Spanish explorer Cortes landed in Mexico, he found an Aztec nation engaged in its own culture of death. Every month, thousands of people from conquered tribes would be dragged up Mexican temples and have their hearts ripped out of their chest—to “feed” the gods and the Aztec upper class, who had come to rely on the sacrifices as a key source of protein. (We have still have some of their ghoulish recipes for cooked human flesh.) With only a few hundred troops of his own, Cortes turned to the tribes that fed the sacrifices, who allied with him to obliterate the Aztec kingdom and close its temples.

This was the pagan despair that lurked in the background when the Virgin appeared in Mexico. Few Indians had dared to accept the new and gentle creed of Christ, a God who accepts no sacrifices, but offers Himself for us. It seemed too good to be true. But when they saw clothed in their own garments and speaking their own language a Lady who reflected God's love for them in particular, the Mexican people gained the courage to hope. The faith of the Mexican people in Christ can be traced to the tilma of Juan Diego, and it has never failed despite the fiercest persecutions.

In our own age of pagan despair, we look to icons of courage and grace to remind us that goodness is possible. We read the lives of men like Dietrich Bonhoeffer, of women like Mother Teresa, and we search out the people who today are standing for life in the face of death—especially those in the pro-life movement, who face down the law and the media, the courts and the social elites, to defend the weakest, most vulnerable images of God's most precious creation.