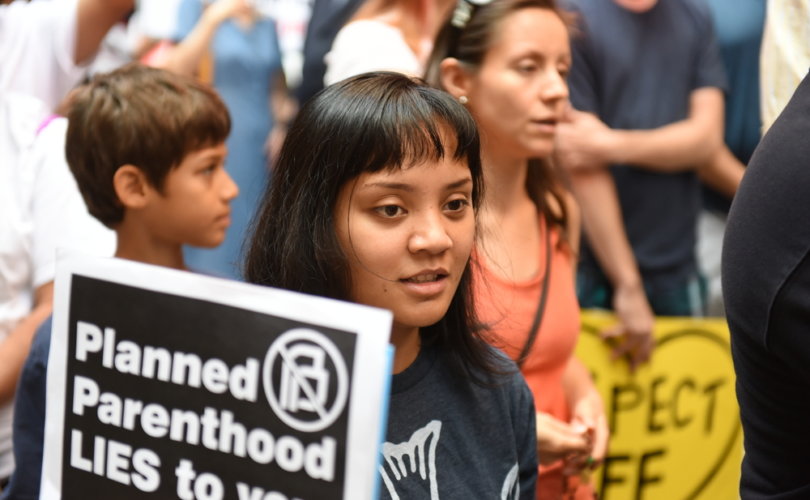 May 3, 2016 (Pro-Life Action League) — On April 23, the Pro-Life Action League coordinated the first-ever annual nationwide Planned Parenthood protest, in collaboration with our friends at Citizens for a Pro-Life Society (CPLS) and Created Equal (CE). I served as co-director of this effort, along with Monica Migliorino Miller of CPLS and CE’s Mark Harrington.

In all, 228 individual protests were held in 44 states and the District of Columbia, with more than 10,000 pro-lifers coming out to educate the public about the deadly agenda of the nation’s largest abortion chain. More than 60 national, state and local pro-life organizations co-sponsored the event.

These protests were modeled after the historic wave of protests held in August and October last year under the “ProtestPP” banner in response to the undercover videos released by the Center for Medical Progress, in which top Planned Parenthood officials callously discussed harvesting and selling the body parts of aborted children. ProtestPP inspired a new surge of pro-life activism throughout the country, which Monica, Mark and I have been eager to build upon with our network of local leaders. We plan to continue holding a nationwide protest like this on the last Saturday of April in coming years.

This year, the protests focused especially on calling for Planned Parenthood to be stripped of all state and federal funding—an issue of particular urgency right now, with a contentious presidential election under way. The fate of Planned Parenthood’s yearly government subsidy of more than half a billion dollars depends on who occupies the White House come next January.

The protests also called for all charges to be dropped against David Daleiden, the man behind the undercover videos. David has been sued in civil court by both Planned Parenthood and the National Abortion Federation, and was indicted by a grand jury in Harris County, Texas, that was supposed to be investigating Planned Parenthood for wrongdoing.

Instead the grand jury—under the authority of a state’s attorney with ties to Planned Parenthood—accused Daleiden of trying to illegally purchase fetal tissue and using a “fake I.D.” in his undercover operation—a common technique in investigative journalism. Earlier this Spring, David’s apartment was raided by agents of the California Attorney General, a recipient of major campaign contributions from Planned Parenthood.

Daleiden himself spoke at the protest held in Sacramento, California. He had previously joined ProtestPP at the building site of a Planned Parenthood mega-center in Washington, D.C. for a rally held the day before the March for Life in January, and spoke at the October 2015 protest in Orange, California. This collaboration with Daleiden is a prime example of how the Pro-Life Action League’s style of direct action can serve the wider pro-life movement.

ProtestPP earned hundreds of news stories both before and after the National Day of Protest, including many segments on local TV news broadcasts. This is one of the most effective ways to reach a large audience with the truth about Planned Parenthood.

Indeed, one of the major goals for conducting protests like this on a national scale is to earn such TV coverage. Local involvement in a large nationwide event is an irresistible story for many reporters, even if they don’t sympathize with our position. And even when the media does not cover an individual protest, the local leaders know their effort is critical for earning coverage elsewhere in the country.

In Detroit, TV news coverage included footage of the so-called “Satanic Temple of Detroit” crashing the protest there to perform a bizarre bit of street theater. About a dozen “Satanists” appeared, many wearing crying baby masks and leather bondage gear, moaning and beating each other with whips. Others carried signs reading The Future of Baby Is Now, while a member dressed as a priest knelt in mock prayer. After performing this stunt in Detroit, they did an encore in Ferndale, Michigan.

If their goal was to demoralize the pro-life activists, they utterly failed. On the contrary, they served only to expose the vulgarity and desperation of the pro-abortion movement. A video of the incident on CPLS’s YouTube channel earned more than 67,000 views—incredibly bad publicity for Planned Parenthood.

Also encouraging was the presence of pro-abortion counter-protestors at a few sites, holding banners reading Health Care Happens Here. Planned Parenthood was clearly troubled enough by our presence to have these banners printed and distributed around the country, and yet they weren’t able to scrounge up volunteers to hold them at any but a handful of their centers.

More joyous scenes were on display at protests in Philadelphia, Pennsylvania, Ann Arbor, Michigan, and Pomona, California, where leaders reported babies being saved from abortion directly as a result of the large pro-life presence outside Planned Parenthood.

In Pomona, a woman stopped while driving into the facility’s parking lot to talk to a pro-lifer named Michelle, who encouraged her to go to a pregnancy help center up the road. After sitting in her car for 10 minutes, the woman came back and told Michelle she wanted to go to the help center. Michelle took her there and later reported that the woman had decided to keep her baby.

And these are only the turnarounds that we know about. Women are often so ambivalent about going through with abortion that merely seeing a pro-life protest when they arrive for their appointments is enough to convince them not to go through with it. We sometimes learn about these rescued children months or years after the fact.

Bishops on the Front Lines

Among the notable speakers at protests around the country were Bishop Thomas Tobin at the protest in his diocese in Providence, Rhode Island, and Bishop Liam Cary of the Diocese of Baker, who attended the protest in Bend, Oregon. Numerous other clergy attended protests across the nation, and the event in Denver, Colorado was directly sponsored by the Archdiocese.

Congressman Andy Harris—one of the strongest pro-life legislators in the country—spoke at the protest in Easton, Maryland. In Concord, California, an impressive list of speakers included Pastor Walter Hoye, who successfully defeated a “Buffer Zone” charge in Oakland in 2011, and Reggie Littlejohn, an internationally renowned activist fighting to end brutal forced abortions in China.

Speaking of the international pro-life movement, support for ProtestPP came in from pro-lifers in Canada, the United Kingdom, Ireland, Denmark, Hungary, Australia, Nigeria, and even the tiny island of Mauritius, off the coast of Madagascar.

Organizing a nationwide pro-life event like this is the most effective means I’ve found for drawing new faces into pro-life leadership around the United States—one of the reasons the Pro-Life Action League has focused more and more on such activities.

Throughout the rest of this year, the League will offer opportunities for all our local leaders to get involved other in nationwide events like the National Day of Remembrance for Aborted Children coming in September, and the increasingly popular Christmas Caroling Day. We will also help them to maintain a regular pro-life presence at Planned Parenthood throughout the year with all the expertise we have built up in our decades of front-line activism.

Early next year, we will begin preparing for the second annual National Day of Protest at Planned Parenthood, seeking to put even more protests on the map and build on this year’s success. Year by year, our network of local leaders will be expanded and strengthened, as they become more and more effective at building their own corps of pro-life activists and implementing the League’s proven pro-life tactics. The future looks grim for Planned Parenthood!