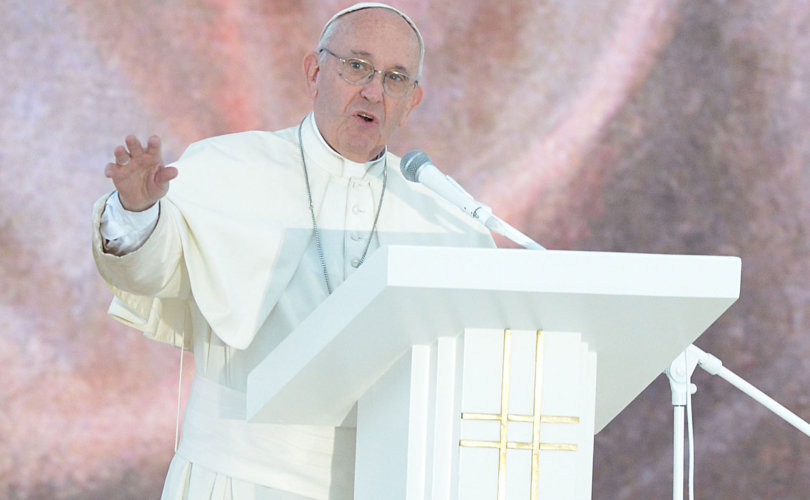 October 22, 2020 (LifeSiteNews) – The disastrous statement of the bishop of Rome on the promotion of civil unions of homosexual partners clearly has an apocalyptic reference. We are in the time of the great test, in which a historical and decisive struggle is taking place.

Carlo Cardinal Caffarra, the founding President of the Pontifical John Paul II Institute for Marriage and the Family, shortly before his death in 2017, referred to a letter from Sister Lucia of Fatima in which she had written the following: “Father, a time will come when the decisive battle between the kingdom of Christ and Satan will be over marriage and the family. And those who will work for the good of the family will experience persecution and tribulation. But do not be afraid, because Our Lady has already crushed his head. ”[1].

In light of the message of Fatima, it is striking that the assassination attempt on Pope John Paul II is directly related to the establishment of his prophetic Institute for Marriage and the Family. Pope Benedict XVI pointed this out in an address on the occasion of the 25th anniversary of its foundation: “On that day, May 13, 1981, my beloved Predecessor John Paul II suffered the well-known serious attack on his life during the Audience at which he was to have announced the creation of your Institute.”[2]

The past seven years have shown in a shocking way what hatred the adversary has for the beauty of the true teaching on Christian marriage and family. The Institute of St. John Paul II has not only been massively attacked, but completely dismantled and robbed of its very essence. At both of the Synods of Bishops on Marriage and Family, in 2014 and in 2015, it was completely ignored until the unacceptable exhortation Amoris laetitia in 2016 even brought forth a direct contradiction of Church teaching. In the same year, the ultimate destruction of the Institute began with the appointment of a new Grand Chancellor and opposing statutes, and with the suspension of all previous professors. In addition, it was subjected to a substantive “reorientation” that insiders described as a “purge” in the most negative sense [3].

The break made by Bergoglio is now openly evident, because on March 28, 2003, Pope John Paul II had approved the following clarification of the Congregation for the Doctrine of the Faith and ordered its publication: “There are absolutely no grounds for considering homosexual unions to be in any way similar or even remotely analogous to God's plan for marriage and family. Marriage is holy, while homosexual acts go against the natural moral law”[4].

The testimony of the saints leaves no doubt about the extent to which homosexual acts offend the Creator and provoke His retribution. How can we fail to think of God's insistent admonition, handed down to us in the famous Dialogue of St. Catherine of Siena: “The wretched do even worse and commit the accursed sin against nature. And like blind fools whose reason is clouded, they do not perceive the rottenness and misery in which they find themselves. Not only to Me, who am the highest eternal purity, it is disgusting (so detestable indeed that for this one sin I destroyed five cities by My divine judgment, since My righteousness would not bear it any longer), but even to demons”[5].

Based on the clear biblical message, the Permanent Magisterium of the Catholic Church has always protected marriage and family. Thus, especially today it cannot be concealed that homosexual practices are among the grave sins that seriously violate chastity (cf. CCC 2396) and are vehemently rejected by Holy Scripture (cf. Gen 19:1-29; Rom 1:24-27; 1 Cor 6:9-10; 1 Tim 1:10). The Catechism reminds us of the guilt of the Sodomites that “cries to heaven” (cf. CCC 1867).[6]

In this apocalyptic time of the False Prophecy, the intervention of the Immaculate Heart of Mary, whom we venerate as the one who crushes the head of the hellish serpent, strengthens us. She, the purest Virgin, Mother of Beautiful Love and Mediatrix of All Graces, will make us see through the snares of the evil enemy and lead us safely to the salvation which the Triune God gives to His own.

In the great tribulation of this epochal and decisive struggle, in which the eternal salvation of so many souls is threatened, we repeat the famous words spoken by Pope John Paul II at the consecration of mankind to Our Lady of Fatima: “Once again, let the infinite saving power of salvation show itself to the world: the power of merciful love! That it puts a stop to evil! That it changes consciences! In your Immaculate Heart the light of hope is revealed to all!”[7]

[1] Diane Montagna, “Timeline of events reveals plot to destroy legacy of JPII Institute,” in: LifeSiteNews, August 20, 2019.
[2] Pope Benedict XVI, Address on the occasion of the 25th anniversary of the Pontifical John Paul II Institute for Studies on Marriage and the Family, May 11, 2006.
[3] See Diane Montagna.
[4] Congregation for the Doctrine of the Faith, Considerations regarding proposals to give legal recognition to unions between homosexual persons, June 3, 2003, I,4.
[5] St. Catherine of Siena, Dialogue III, 124, in: Conversation about God's Providence, Einsiedeln 1993 (4th edition), p. 163.
[6] Cf. Congregation for the Doctrine of the Faith, Letter to the Bishops of the Catholic Church on the pastoral care of homosexual persons, October 1, 1986, 6.
[7] Pope John Paul II, Act of Consecration to Mary, March 25, 1984.