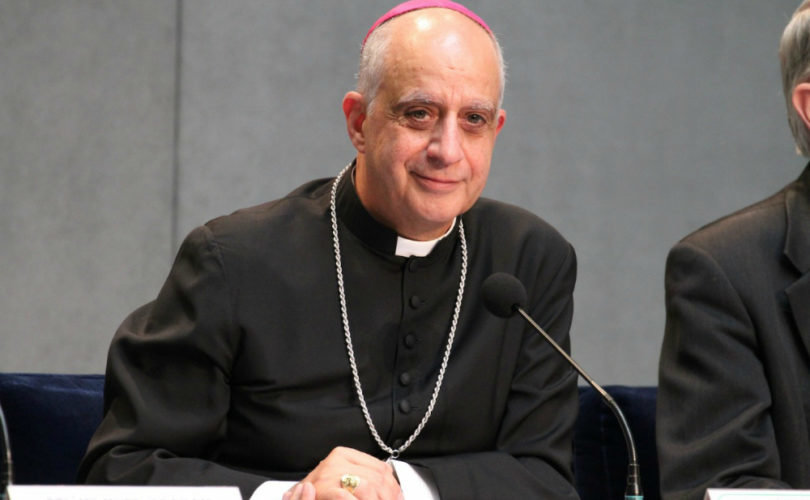 Archbishop Fisichella, President of the Pontifical Council for New Evangelization

December 7, 2015 (Voice of the Family) – Archbishop Fisichella, President of the Pontifical Council for New Evangelization, has stirred controversy by suggesting that some criticisms of Pope Francis might result in automatic excommunication.

Archbishop Fisichella made his remarks at a Vatican press briefing while explaining how Pope Francis’s new “Missionaries of Mercy” will operate. The 800 “missionaries” will have the power to absolve from penalties previously reserved to the Holy See.

In reference to Canon 1370, which imposes automatic excommunication for “physical violence” against the Roman Pontiif, Archbishop Fisichella said:

I would say that we need to understand well ‘physical violence,’ because sometimes words, too, are rocks and stones, and therefore I believe some of these sins, too, are far more widespread than we might think.

Archbishop Fisichella’s comments will be interpreted by many as an attempt to silence faithful Catholics who are deeply concerned by the direction currently being taken by those who hold offices at the highest levels of the Church. Serious concerns have been raised over the last two and half years concerning:

In the face of these and other scandals Catholics have not only the right but also the duty to offer respectful, but forceful, criticism. This grave duty is outlined in Canons 211 and 212 of the Code of Canon Law:

Voice of the Family is confident that Catholics at every level of the Church will continue to fulfil their duty of defending the Catholic faith throughout the “Year of Mercy” and during the years ahead.