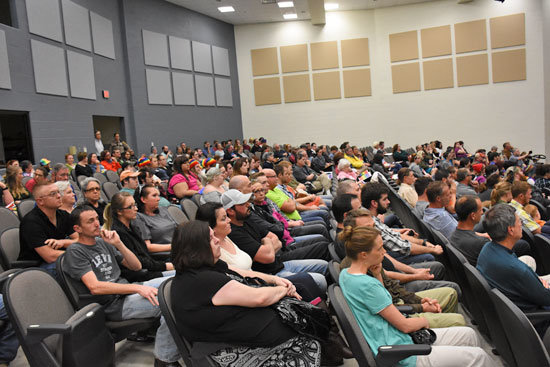 Facing a large crowd of LGBT activists in the audience in their March 14 meeting, the Franklin County, Tenn. School Board seemingly backed down from the fight against having a GSA club in their high school.

March 21, 2016 (MassResistance) — Facing a large crowd of LGBT activists in the audience in their March 14 meeting, the Franklin County, Tenn. School Board seemingly backed down. They had indicated to parents that they would vote to remove the newly formed “gay” club from the county high school. But instead of taking any action, they surprised everyone by briefly discussing some proposed rule changes for all school clubs (designed to put constraints on the “gay” club) – then simply tabled the discussion and adjourned the meeting.

Joyful LGBT activists, mostly from out of town, comprised approximately three-quarters of the nearly 250 people in the audience. But the local parents at the meeting were extremely angry, feeling they had been lied to and deceived by their elected officials. Brian Camenker of MassResistance had been invited by parents and was also present. They told him they are not giving up.

As MassResistance recently reported, state and national LGBT activists have targeted Franklin County, TN, because of the religious nature of that area. Earlier this year, activists working with pro-“gay” school administrators set up a “GSA” (gay-straight alliance) club in the high school. Parents across the county loudly objected. Many of them have since been viciously attacked on the Internet by LGBT activists.

The parents had strongly appealed to their School Board for action. After much discussion, the March 14 School Board meeting was publicized to be a “showdown” where an official vote to ban the club was to be taken. Because of the widespread interest, the meeting was moved from the normal meeting room to the high school auditorium.

After the GSA club was revealed, the national ACLU sent a strongly worded, detailed legal letter to various Franklin County school officials threatening to sue the school system if they did anything to disallow it. But this didn’t dampen the energy of the community.

Also, the national pro-family legal group Liberty Counsel has spoken directly with school officials — disputing much of the ACLU’s statements and offering to defend the county in court if necessary.

The LGBT movement also didn’t let up. In the days preceding the March 14 School Board meeting, LGBT activists told parents across the county that the school was in danger of losing all of its clubs if the Board did anything to stop the “gay” club. This is not necessarily true, says Liberty Counsel. But it has frightened parents whose kids are active in school clubs.

On the day of the School Board meeting, Brian Camenker of MassResistance was in Franklin County. Early that morning he was on drive-time radio in studio on two stations (one right after the other). He educated the listeners on what is really happening, what these “gay” clubs actually do with children, and he cut through the lies and disinformation of the LGBT movement. In all, he was on the air for over an hour.

Camenker also met that day (and the following day) with several key parent activists who have organized other parents across the county.

Some parents said they had spoken personally with the School Board chairman and other members. They had been told that the Board was deciding among various approaches to remove the “gay” club from the school, taking into consideration the threats of a lawsuit by the ACLU, the possibility of closing all clubs, and the advice by Liberty Counsel. The Board was looking to settle on a strategy and would take a vote at the meeting that night, parents were told.

An hour before the meeting, LGBT activists held a rally in the high school parking lot. It was organized and run by adults from the University of the South and included LGBT activists from Tennessee and beyond. Although only about 40 people or so showed up, it included the kind of angry and hate-filled rhetoric that we unfortunately often see.

One speaker from the nearby University community said that the local Franklin County parents are not “human” and that the LGBT activists need to “teach them how to be human.” There was a lot of talk about the “hate and bigotry in the county” that needs to be overcome “by love.” (Any pro-family group opposing them is a “hate group” according to their rhetoric.)

It was heavy on psycho-babble: The “gay” high school kids are victims, they said, just like blacks in the Civil Rights movement. The local parents are “adults acting like children” — the teenagers are the actual adults because they're “stopping suicides.” The “gay club” kids are all good, wonderful, and brave, and their Christian parents are losers. And on and on.

It was also revealed where the organizing comes from. A seasoned homosexual activist from Alabama described how he’s been organizing the push in Franklin County. He said they have “more plans for Franklin County” and that they’re preparing to force “gay” clubs into all the neighboring counties next.

MassResistance will post video from the rally and a full report in an upcoming post this week.

Stirring up the pot?

Also just outside the high school were a few people with explicit signs condemning homosexuality, and yelling strong epithets. No one knew them. One of them said they had come from Nashville. There was some suspicion they had been encouraged to come by the LGBT activists, in order to make a scene. (This is a common tactic of the Left.)

Filling up the auditorium

The LGBT movement had clearly planned to come and intimidate. As mentioned above, at least three-quarters of the 250 people in the auditorium were clearly LGBT activists. Almost none of them were from the community, according to everyone we talked to. Conversely, a lot of local community members were fearful of the outbursts and harassment from LGBT activists at the previous meeting and  stayed away. The LGBT movement’s strategy had some effect.

The School Board meeting

Everyone at the meeting, on both sides of the issue was expecting to see a motion, debate, and a vote on removing the “gay” club in some manner. But what happened was confusing. The board projected on the screen a list of new rules for all high school clubs and began discussing them. Moreover, the meeting was not run by Robert’s Rules of Order, but by a more informal back-and-forth led by the chairman.

The pro-LGBT Board member (from the area dominated by the University) had come prepared with a detailed set of objections to many of the rules. But the other Board members acted as if this was the first time they had seen the list.  After about a half hour of discussion, the chairman suggested that they table it until some future date, and the others agreed. Then the chairman suggested they adjourn, a few others agreed, and the Board members quickly left.

Everyone in the auditorium was stunned. The LGBT activists, of course, were delighted. But the parents were steaming. It clearly looked like a crass political move – that the Board was just stalling until after April 7, which is the deadline to file to run for school committee (against the incumbents) in this year’s elections.

A few parents have spoken to Board members since the meeting. The story is not completely coherent. It appears they couldn’t figure out a solution for removing the club, so at the last minute they switched gears. They pulled up a set of universal club rules that a school district in another state had successfully used to make it nearly impossible for a “gay” club to operate over the long term. For example: requiring opt-in parental consent to join any club; strict limitations on outside speakers and participants; and documenting all activity in the club. These are an anathema to the way “gay” clubs intertwine kids with hardcore LGBT activists, push sexual themes, and promote outside events. But the LGBT movement is on to this strategy and fights it as hard as it can.

But the Board hadn’t really thought through this alternative approach. And obviously someone (probably the Superintendent) gave the proposed list of rules to the left-wing Board member in advance. On top of this, the board is completely new to the pressure from the LGBT movement, and the large media exposure. So the plan fell apart, and they did what politicians often like to do under pressure: postpone everything. And in doing so, they inflamed their own supporters.

In our opinion, this is a pivotal battle that could set the tone for the rest of the Bible belt, and ultimately the rest of America.

As a culture-war battleground, Franklin County is different than most places because it has a large number of Bible-believing parents and citizens who willing to confront this issue — and they are fearless.  It’s been widely estimated that 80-90% of the county strongly disapproves of the “gay” club. And although the principal and superintendent (hired from the outside) are typical pro-“gay” liberals, the School Board isn’t. Their skittishness comes mostly from their uncertainty over the legal issues and the sudden outside pressure.

However, the legal team at Liberty Counsel has told us that there is a wide range of strategies that the board can use to get the “gay” club removed, which they’ve outlined to board members. And if it ends up involving a lawsuit from the ACLU, Liberty Counsel is willing to step up and defend the schools.

Our belief is that the board members haven’t properly communicated to each other everything that Liberty Counsel has told them, which has mostly been in phone conversations with one or two individual members. We think that once all that can come together — and if the board is seriously willing to take this on — they can move forward and win.

In the meantime, parents right now are very angry. Four of the eight board members are up for re-election this year, including the chairman. Two of them now have opponents who have taken out papers to run. We think that the other two could have opponents within a week.

In addition to that, one parent has announced that he will be filing a multi-million dollar lawsuit against the school system for the damage the “gay” club is doing to the students and the high school environment. He told board members he would be doing that if this is not resolved properly.

The next School Board meeting is April 11. We’ll let you know what happens.