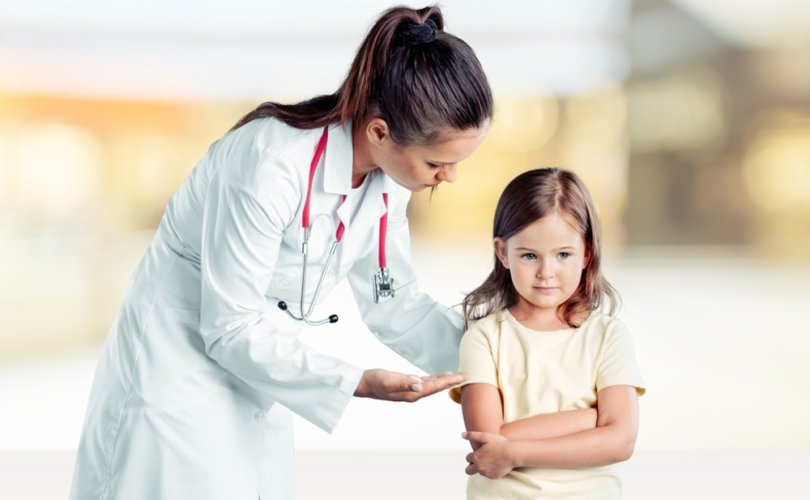 August 16, 2017 (LifeSiteNews) — Friends of ours related a chilling incident that happened to their teen son.

Visiting a family physician for a school sports’ physical, the boy was asked by the doctor, “So, are you attracted to girls, to boys, or both?”

Stunned, the boy replied, “To girls,” and later recounted this exchange to his parents.

And it’s common for adolescent patients to be counseled separately from parents during an office visit so a private conversation can occur about sexual practices, contraception, condoms and other “needs.”

Why this elitist social engineering of other people’s children? Parental control can be a child’s enemy, so the thinking goes, sometimes motivated by ignorance, fear, and repression. Child emancipation/separation tactics are being pushed everywhere in medicine, as they are in public education.

“They” know what’s best for your kids.

Highly-educated professionals in a healing occupation who should know better sometimes discourage children from staying close to the people who care the most about them in the whole world. They often have contempt for traditional family values that may motivate a teen to remain responsibly abstinent until marriage.

Why keep the parents in the dark about medical advice?

Part of it might have to do with a doctor wanting to support the adolescent’s budding sexuality that the doctor sees as being threatened by parental boundaries. Schools behave this way as well, with numerous incidents recounted of children directed to abortion clinics and pro-homosexual counselors and groups without parental knowledge.

It’s a busybody mentality wedded to the ethic of individual freedom, even for younger children before they reach the natural balance provided by maturity. That maturity also corresponds—or did until recent years—to legal restrictions as well.

Leftists are willing, even eager to smash boundaries, including age of consent laws. They believe they are entitled to advise your children on intimate and life-changing matters without your input.

When I was a young teacher and a committed social liberal volunteering at Planned Parenthood, I told several 8th-grade girl students who asked me how to obtain contraception without a parent’s knowledge.

I am terribly ashamed of this chapter in my past and confess right now to the Lord how sorry I am.

I never learned the results of my irresponsible guidance, but the reality is, such educational or medical advice can be terribly destructive.

I recently interviewed Dr. Michelle Cretella, president of the American College of Pediatricians, on my Ohio radio show. When questioned about gender dysphoria in children, she made a very chilling point—that current medical protocols have raced beyond any science to back them up.

In other words, children and teens are guinea pigs, being administered potent, life-changing drugs and steered down Mengelian paths by physicians at some of the top children’s medical centers in the nation who cater to radical sexual politics, not to empirical evidence that supports such treatment.

Dr. Cretella’s courageous claim that aiding a child in gender “transition” is “child abuse” is being disputed by an Australian study, but tellingly, they fail to make a scientific case for their challenge.

One organization famous for ignoring scientific truth is Planned Parenthood, whose new guidelines for parents of preschoolers got a lot of publicity recently. We should teach children that their genitals do not determine their gender, they claim. The abortion giant is now also in the hormone treatment business.

One commentator, S.E. Cupp, said this about the PP advice: ”Of all the things it is—absurd, irresponsible, pretentious—one thing it definitely is not is scientific.”

The medically-accepted age where minors can give consent is decreasing rapidly.  In some states, the law is explicit. Others, not so much.

The Guttmacher Institute, established as a research arm of Planned Parenthood, summarizes the liberalization of consent, which they view positively:

The legal ability of minors to consent to a range of sensitive health care services—including sexual and reproductive health care, mental health services and alcohol and drug abuse treatment—has expanded dramatically over the past 30 years. This trend reflects the recognition that, while parental involvement in minors’ health care decisions is desirable, many minors will not avail themselves of important services if they are forced to involve their parents… In most cases, state consent laws apply to all minors age 12 and older. In some cases, however, states allow only certain groups of minors—such as those who are married, pregnant or already parents—to consent.

Yes, the excuse that “teens won’t report problems” is used everywhere to legitimize the left’s sexual agenda. The results speak for themselves.

Some states remain silent on whether a minor can receive contraception without parental consent—Ohio, for instance. So what happens? Clinics and physicians probably do whatever they want. And Title X clinics—like Planned Parenthood—will keep a teen’s visit “confidential.”

But the trend toward medical lawlessness and mythology is understandable once you look at people in key leadership posts. Take, for instance, Dr. Rachel Levine in Pennsylvania, the state’s physician general. “She” was actually born a “he.” And he is not alone.

In Virginia, Dr. Marissa Levine is the state’s commissioner of health. It’s unclear if these two are related.  But what is clear is “Marissa” is a guy named Mark who identifies now as a woman.

With leadership so foundationally compromised, why are we surprised when sodomy is sold in private exam rooms to teen boys and grade school children are given puberty blockers by pediatric “experts”?

Katherine Kersten in The Weekly Standard said it this way: ”In short: The use of sex-reassignment treatments in children amounts to a massive, uncontrolled experiment.”

I would submit that the same description applies to the normalization of homosexuality and promiscuity in adolescents.

And educators, doctors and public health professionals should worry about angry parents at the door today, confronting the flagrant abuse of their children.

But they should worry about facing a much more daunting Authority sometime in the future. And He will not be smiling.

Note: This article was reprinted by permission of the author.