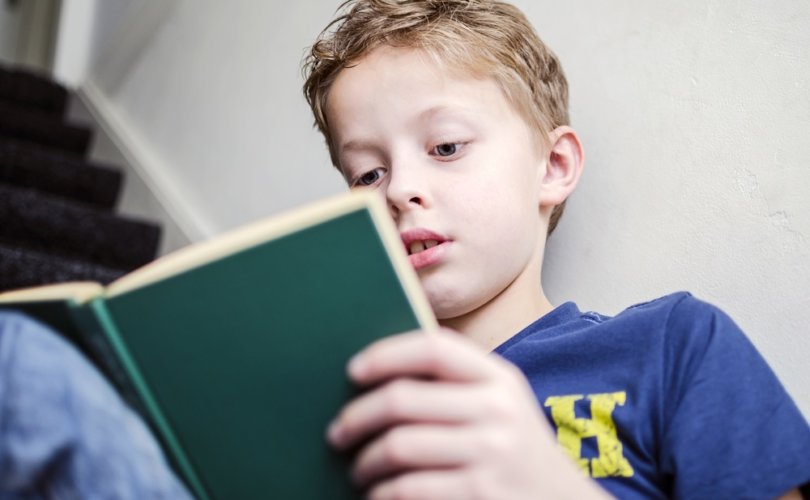 November 4, 2019 (Daily Signal) — Parents in Loudoun County, Virginia, are outraged after discovering that thousands of books were placed in classrooms across the school district this year as part of a new “Diverse Classroom Library Initiative.”

Even books at the kindergarten level promote LGBT ideology through books such as “My Princess Boy,” designed to introduce 5- and 6-year-olds to the harmful idea that they can change their gender. Another book, “Heather Has Two Mommies,” denies the need for fathers and ignores the loss a child might feel over having no relationship with his or her father.

Other titles include, but are certainly not limited to: “Prince and Knight” (second grade), “Beyond Magenta: Transgender Teens Speak Out,” “Some Girls Bind,” “Weird Girl and What's His Name” (positively featuring statutory rape between a young boy and his boss, and a relationship between a girl and her teacher), and “Being Jazz: My Life as a Transgender Teen.”

The content in many of these books is graphic, and the language so obscene that when parents read passages aloud at a recent school board meeting, board member Joy Maloney, who supported the books, protested that the meeting wasn't an “appropriate setting” to hear such language.

Parents and even the board chairman were quick to point out the irony in this sentiment.

Not only is the content of these books grossly inappropriate, but equally bad is the secretive and unaccountable manner in which the “diverse books initiative” was implemented — as well as the clear intent to cut parents out of their own children's formation when it comes to topics of sexuality.

Having studied a lot of literature in college, I can sympathize with many of the arguments in favor of these books. Great literature deals with hard topics, characters who are different from us, and characters in whom we see a reflection of ourselves because of our shared virtues, flaws, and humanity.

At the same time, as a new parent, I'm coming to understand the delicacy of raising children and how to introduce them to new concepts and experiences.

To insinuate that complete strangers — be they administrators, librarians, “experts,” or “specialists” — know better than parents when it comes to instructing the moral imagination of our own children is completely unjustified, especially when we know there is a larger agenda at play.

Which brings us to how this mess in Loudoun County Public Schools came about.

When parents received an email at the beginning of the school year from the school district announcing its new diversity statement and the accompanying Diverse Classroom Library Initiative, their initial thought was, “Great, we love diversity.”

But upon digging into the massive book list, several parents were alarmed by some book descriptions.

Unfortunately, this program is unlike the typical “LGBT book displays” that other parents encounter at their local libraries, in which the agenda is clearly marked and accessible to parents for review.

Instead, large collections of these books were placed by administrators into schools county-wide to supplement teachers' classroom libraries. Not only do parents have no idea what their children happen to pick up and read during a school day, but kids aren't even allowed to bring books out of the classroom.

And even though the books aren't part of the curriculum, a board member at the latest October meeting pointed out that nothing prevents a teacher from selecting one of the books to include in their lesson plans, even though it's not part of district-mandated curricula.

Other important facts came to light at this meeting. According to testimony by Ashley Ellis, the assistant superintendent for instruction, Loudoun County Public Schools staff has not even read the diversity books. The books were instead selected by various “specialists” and “library experts,” including Mackin, a third-party book selection agency.

Ellis defended the books as having won various awards, especially by the American Library Association.

Recognition by the American Library Association is little comfort, however, because it's one of the worst perpetrators of pushing raunchy, ideological books on children in the name of diversity, inclusion, and “authenticity.”

Its promotion of “tips and tricks” to secretly move your library toward hosting Drag Queen Story Hour — such as “sneakily [fitting] stuff into current programs” and “creatively [encouraging] inclusive collection development,” doesn't help much, either.

Even the school board claims it was only notified in September, along with parents — though some board members support the program. And while school administrators apologized to the public for their lack of transparency, the growing ideological push behind these books is going to make it hard to regain Loudoun County parents' trust.

Inquiry surrounding the school district's policies is ongoing, and there are several fundamental flaws with the diversity program itself, not just its execution.

The entire policy is backward, as Chairman of the Board Jeff Morse noted at the October board meeting.

“Our policy is reactive,” he stated. “We're waiting until the kid sees stuff to come out and say, well, the parent can object to that. By that point, it's out there. It's already in schools and on the book shelves. They should be completely read before they're put in the hands of a fourth-grader.”

Parents do want to be able to discuss these topics with our children, but the nature of the classroom libraries ensured that parents and the community were kept in the dark about what their kids were taking in for as long as possible.

The burden is first placed on children to bring up these sensitive topics with their parents if they had seen or read something they were confused or even embarrassed by.

Then, the burden is placed on parents to read the books, file a complaint at the school level — when the policy was implemented district-wide — and then go through an appeal process if the school principal decides to keep the book.

While parents all ideally work toward having open, trusting relationships with our kids so that they can come to us with their problems, the reality is that Loudoun County Public Schools is introducing a serious barrier to parents' ability to guide the moral education of their children.

This runs contrary to the county's own Family Life Education curriculum guidelines (sex ed), which “stress the need for individuals to make decisions appropriate to values established within their families,” and “encourage child-parent discussion.”

Citizens need to make their voices heard. We need to rid ourselves of the commonly recited mantra that “politics is downstream of culture.”

Politics helps shape culture, and the school board will determine which belief system will shape our children's moral imaginations, their vision of family, and even how they view their own bodies.