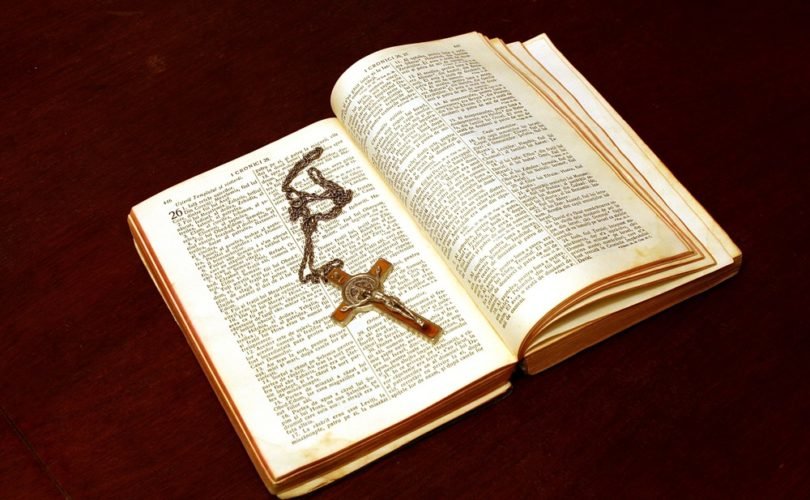 April 24, 2015 (CrisisMagazine.com) — Faithful Catholics who have supported Patricia Jannuzzi, the embattled New Jersey Catholic high school theology teacher, who had been suspended from her job at Immaculata High School for using her Facebook page to present authentic Catholic teachings on homosexuality and same-sex “marriage,” were happy to hear that she finally was returned to the classroom. It is a significant victory that the beloved teacher was not forced to apologize for what critics described as intemperate Facebook comments about Catholic teachings on homosexual behavior.

Still, many of us remain puzzled why Monsignor Seamus Brennan, the pastor of the Church of the Immaculate Conception, would write in a statement shared with Immaculata faculty and staff earlier this month that Jannuzzi was to be reinstated because of her “otherwise good reputation as an educator for 30 years.”

“Otherwise”? Monsignor Brennan’s statement suggests that he remains unhappy with Mrs. Jannuzzi’s Facebook posts but now claims that it was always a problem with the “tone” of her comments on Catholic teachings—and not the content of her message. Writing that “from the beginning this was a personnel and not a theological issue,” Monsignor Brennan maintains that “We are now and always have been united in our understanding and commitment to the teachings of the Catholic Church.”

In his letter to faculty and staff, Monsignor Brennan cautions that “a Catholic school teacher must always communicate the faith in a way that is positive and never hurtful.” Perhaps Monsignor Brennan does not realize that no matter how loving our words may be, the truth about Church teachings on same-sex behavior can sometimes sound “harsh” to unreceptive ears. People do not like to hear that what they may believe is a loving relationship, has been defined as “disordered” by the Church. And, although many may agree that Mrs. Jannuzzi’s words sounded harsh—especially when she concluded that gay men and lesbian women were behind “an agenda to reengineer western civilization into a slow extinction”—the truth about Catholic teachings on same-sex behavior is always going to sound harsh to those who participate in, or advocate for, such behavior.

Mrs. Jannuzzi has been a much loved teacher for more than three decades. Several of her former students have described her as a warm and caring person—including Scott Lyons, a gay alumnus, who said that he remembers Jannuzzi’s classes to be “focused on love and acceptance.” Current student Matt Nerger, a senior at Immaculata High School told a reporter for a New Jersey newspaper that “She is by far the most loving teacher I have ever had.” Nerger added that Mrs. Jannuzzi was someone who would “brighten your day.”

Even Greg Bennet, a gay 2004 graduate of Immaculata, (and a “Real Housewives of New Jersey” cast member) who had shared a screen shot of one of Jannuzzi’s Facebook posts with his 165,000 Twitter followers, referring to her as a “nightmare dumpster human” who had taught him in high school, had to acknowledge in a phone interview with a New Jersey reporter that Jannuzzi “was a very warm person … just really into her faith, and that’s always how she’s been.”

Indeed, that is the real problem here. It was not just the tone of Patricia Jannuzzi’s Facebook postings—it is the content. Patricia Jannuzzi’s faith requires her to defend Catholic teachings. Unlike some of her colleagues at Immaculata High School and other Catholic K-12 schools who remain willing to use their own public Facebook posts to promote same-sex “marriage” and criticize Catholic teachings on women’s ordination, and reproductive choice, Patricia Jannuzzi remains faithful both within and outside the classroom. Students know this—and some have expressed their feelings on sites like ratemyteacher.com. And, although this site is not a reliable measure of “how faithful” a theology teacher is, it is interesting to note that while Jannuzzi’s students have praised the beloved teacher, some of her colleagues have received some mixed reviews on their faithfulness. One theology teacher was described by a student on the site as: “One of the worst things to ever plague Immaculata. I would not even consider her Catholic. Please do not listen to this product of the 60s/70s. Catholicism is much more awesome and deep than this.” Another student described this particular teacher as “always sarcastic.”

While Monsignor Brennan asserts that this was always a “personnel issue and not a theological issue,” it is difficult to understand why a personnel issue was discussed so publicly and her character was publicly impugned by the earlier statements issued by the principal of Immaculata High School. Certainly the response from the gay advocates and their allies through their change.org petition helped to make this a public issue, but the school leaders exacerbated this by publicly refusing to acknowledge Jannuzzi’s willingness to defend Catholic teachings, and instead, sending a letter of apology to alumni, parents and students for Jannuzzi’s comments.  If it were truly a “personnel issue” it is unlikely that it would have been discussed so publicly.

This is not to suggest that we need to be harsh in our faithful defense. Peter Kreeft writes in Fundamentals of the Faith that the goal of evangelization is “not just to win the head but to win the heart through the head … inviting others into a saving relationship with God through Jesus Christ.” Our Church would be stronger if we were all willing to provide a loving and faithful witness. It is not loving to allow others to continue to pursue a path of self-destruction and Jannuzzi’s Facebook posts make this point. And, although some of her comments may have sounded “harsh,” Patricia Jannuzzi makes “no apologies” for Catholic teachings—and neither should we.