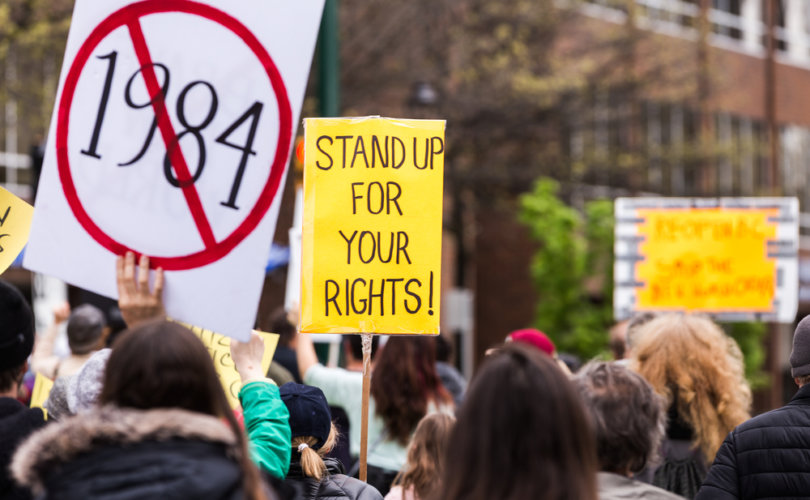 (PJ Media) – We have suffered through a year and a half of a viral pandemic, which has become for a majority of us the Alpha and Omega of everyday life. We think of little else and organize our lives around media-inflamed anxiety, ever-changing medical reports, and government ordinances.

We wear masks. We put distance between ourselves and our fellows. We isolate. We line up for what seems like a never-ending succession of jabs. We devour the news as if it were the truth. We are victims of what is called “fear appeal,” defined as “a persuasive message that attempts to arouse fear in order to divert behavior through the threat of impending danger or harm.”

Yet, in our addiction to the doctrine and apparatus of the COVID industry, far too many of us have missed the big picture. “Maybe there is something darker and more nefarious at work,” remarks Jeffrey Tucker in Liberty or Lockdown.

For there is indeed a pandemic that has spread its pathogens across the world and afflicted the West with a disease from which it may not recover, a kind of viral contagion from which there may be no immediate or even long-term escape. We are confronting a curve that may not be flattened in the foreseeable future.

It is a political disease for which we have many names — progressivism, Wokeism, Agenda 2030, the Great Reset, etc. — but they are all subsumed under the aegis of the Left, which approaches in stages or “waves.” We recall Israel’s official virologist Salman Zarka informing us that “[t]his is our life from now on, in waves.” We might say that the Welfare State is the first wave; “Democratic Socialism” is the second wave; full, undisguised socialism is the third; and the absolute tyranny of Communism is the fourth.

Admittedly, the analogy with the COVID regime partially breaks down since, in the transposition I’m proposing, the disease itself is the object and booster shots cannot be regarded as preventative. (Many will argue that this is the case with the medical pandemic as well, but the question is moot.) In the correlate scenario, however, the “boosters” should be thought of as social and cultural “injections” whose ulterior purpose is to prolong the virulence of the political pandemic.

For example, “health and safety” mandates — that is, official rhetoric — are designed to convince the people that they are being cared for, thus rendering them obedient and docile; or “vaccine passports” — that is, identity papers — are intended to fracture social unity by creating a compliant class of propagandized citizens and an outcast class subject to harsh measures of repression and exclusion.

The parallel may not be as farfetched at it initially seems. After all, citizens of state collectives are conditioned to regard their political rulers as ostensible benefactors, having their best interests at heart. Those who resist — the politically “unvaccinated” — are regarded as malefactors, agents of subversion, enemies of the state, social pariahs, and finally as traitors to be interned, cast out, or otherwise punished.

In this comparison, what we call “escape variants” are merely specific aspects of the fourth wave, particular manifestations of social and political domination applying to local conditions.

The “new politics,” for which the COVID event is a convenient stalking horse and pretext — a “dress rehearsal” for the one-party state, writes Cheryl Chumley in Lockdown: The Socialist Plan to Take Away Your Freedom — will have become the authoritarian dispensation under which we would be condemned to live. And the new politics is the old politics redivivus, the pandemic of Leftism intent on annihilating the common, democratic life of rights and freedoms we have known and taken for granted for several generations past.

COVID is a virus that will be with us in perpetuity, like the common cold and the flu. The plague of Leftism in its various forms, issuing ultimately in Communism, is also a perpetual menace, circulating around the planet like the SARS virion. And as with any despotic regime, there will always be privileges and exemptions enjoyed by the governing elite but not by the governed: the freedom to break the rules, the advantage of accumulating capital, private and unobstructed travel, special favors for family, friends and collaborators, access to the best medical facilities, and the absolute exercise of power — precisely as we have seen with the COVID hierarchy of medical experts and political authorities.

The official response to COVID appears to be a strategy and preparation for something far more deadly, a pathology of governance based on economic threat, mass surveillance, police repression, and unitary state control, as we see developing in many Western countries such as Australia, Canada and the U.S. under Biden.

As Dr. Peter Breggin explains in his monumental COVID-19 and the Global Predators, it is a function of “military civil fusion [which is] the nature of the totalitarian state.”

We need to recognize that Communism advances on many fronts and, as noted, under various denominations, in its effort to revive Marx’s dream of global hegemony. Of course, the situation “on the ground” has changed since Marx’s day. Its new watchword may well be: Oligarchs of the World, Unite!

But we should make no mistake about this. Leftism is a superspreader. It is COVID by another name. It is a thought-virus with real-world consequences. It is the true pandemic.

Of course, we will never reach Communism-zero. There are no miracle vaccines against it, but there are therapeutic measures to halt the scope of its diffusion. As Breggin advises, “It shouldn’t make you helpless. It should rouse you to look with reason at what is happening in the world…unless we unite against the implementation of this plan, there will be no happy ending for any of us.”

Although the Leftist pathogen and its end point in Communism cannot be eradicated, it is, like COVID, treatable by sane and responsible measures: education, political wisdom, a knowledge of history, personal courage, a phalanx of patriots who will not be intimidated and who will not allow the Constitution to be trampled on, and, yes, where necessary, militant quarantine. Recovery is possible and herd immunity may be attainable. Or so we hope.