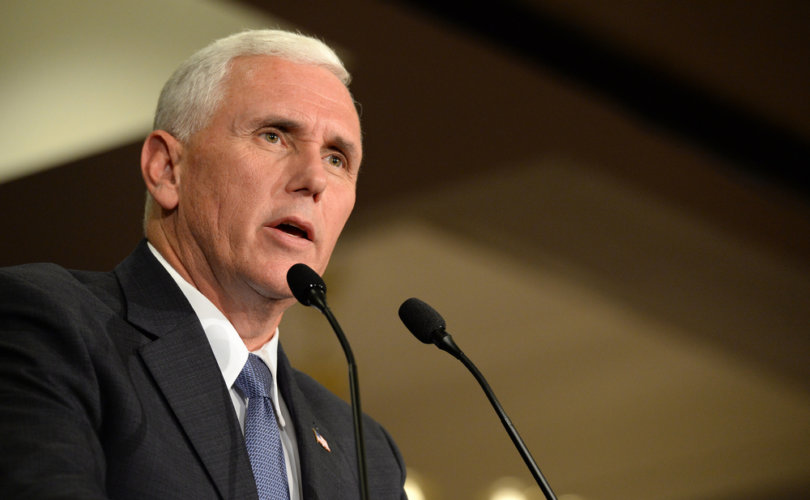 April 26, 2017 (SycamoreTrust) — Notre Dame’s honoring of President Obama in 2009 continues to dog the university. The university’s having Pence instead of Trump as commencement speaker appears designed to mollify Trump supporters while yielding to intense faculty and student hostility to Trump. Father Jenkins perhaps hoped those who might otherwise grumble about Pence would hold off in gratitude.

As we suggested in our earlier bulletin, that was unlikely to work.

As the student publication The Observer reported, the invitation divided the student body. Praise was countered by criticism from representatives of a number of student organizations who decried Trump’s positions on religious liberty and same sex marriage – “homophobic” – on abortion – “sexist” – and on immigration – “racist” and “xenophobic.”

That is, Notre Dame students condemned Pence in large measure for his support of the Church’s teachings on marriage, abortion, and religious liberty. Thus,

The recent launch of a #‎NotMyCommencementSpeaker campaign has generated the most comment. It opened with a group of students demonstrating over several days with whiteboards displaying, according to the campaign’s Facebook page, “direct quotes that are racist, sexist, homophobic, xenophobic, offensive, or ostracizing to members of our community” or that show why the students “feel unsafe with the presence of Mike Pence on our campus.”

An organizer explained that this opened a campaign aimed at “giv[ing] a voice to those who have been silenced” at a school in which the “dominant narrative” is that of “white, conservative Catholics.” The whiteboard display is to be “the first step in fostering a greater dialogue about Pence’s invitation.”

The campaign is supported by a “Letter to the Class of 2017” on social media that, as of April 12, had drawn 1,651 “alumni/ae, faculty, and staff signatories.” It is addressed “particularly to those [students] who feel marginalized or threatened by” Pence, ” a person who “actively opposes [a] sense of human solidarity and concern for the common good.”

It is the bizarre notion that students could feel “threatened” by the appearance of this mild-mannered deeply Christian man that caught the public eye when it was voiced by one of the student “whiteboard” organizers. She declared:

[M]any people on our campus…feel unsafe to have someone who openly is offensive but [sic] also demeaning of their humanity and of their life and their identity.

Two recent segments on Fox TV brought this episode to national attention, one on the widely watched “The Five” and the other on the Fox Business Channel. You can see them here and here.

On Fox Business, after a chuckling moderator introduced the topic as “another case of college craziness run amok, ” the panelists alternated between amusement and bemusement at the image of college students being fearful of one of the “nicest guys in the world.”

“The Five” discussion was more substantial. In this lead-in segment, the moderator bitingly observed that, while Pence “has no criminal record,” he does have “certain views on same-sex marriage and abortion” that might make some students “fearful” – “students who go to the University of Notre Dame, a Catholic school!”

Another panelist read a part of Notre Dame’s mission statement and said “you could pretty much apply that to Pence.” And a liberal Democrat panelist, Juan Williams, closed with this:

Let me tell you what’s going on here. They [the students] didn’t want Trump to speak and prevented an invitation, which is almost pro forma that Notre Dame invites the new president the first year. So they get Pence in place and then get the college Democrats and the diversity council and the gays, all that. When they say I don’t want to hear you because I disagree with you, I find that appalling.

All of this is, to adapt a legal metaphor, the fruit of a poisonous tree, the Obama episode and Father Jenkins’s defense that he was simply following Notre Dame’s tradition of inviting elected presidents no matter their hostility to Church teaching. The accounts of the student anti-Pence protests regularly refer to these events as the background for the student petitions that Trump not be invited and the university’s turning to Vice President Pence instead.

That evident capitulation drew the scorn of many, including the prominent liberal political journalist and Notre Dame alumna Melinda Henneberger:

The absolute worst message for college graduates isn’t what they’d hear from Donald Trump or Mike Pence or Barack Obama or Bernie Sanders. The worst message is the one Father Jenkins sent Notre Dame students when he indulged their preference to only hear from those with whom they already agree.

Grave mistakes that are defended rather than acknowledged are likely to cause continuing damage. Had Father Jenkins confessed error in inviting Obama and scrapped the demonstrably infirm practice of honoring presidents no matter what, Trump’s election would not have cornered him. But he did not, and it did.

Reprinted with permission from Sycamore Trust.