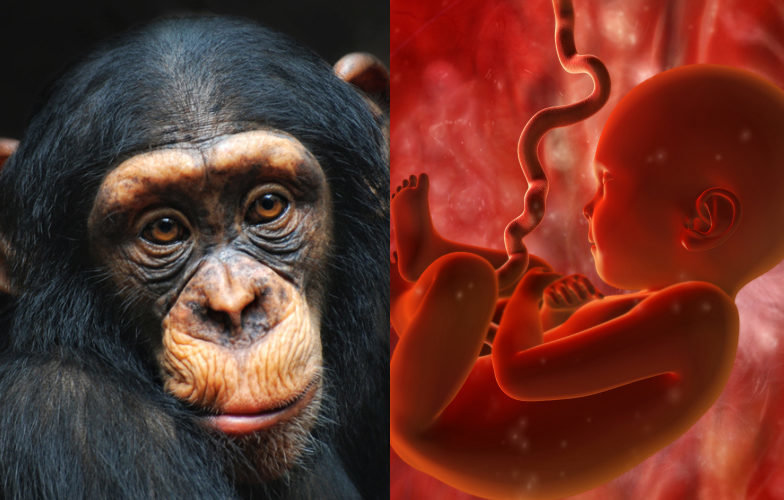 Both animal rights activists and abortion advocates seek to destroy the concept of inherent human rights founded upon the principle of the Imago Dei.

Let’s start with the story of Tommy the chimp, for it serves as a perfect illustration of the views of those who have abandoned personhood as the foundational source of human rights.

Traditionally, human rights were based on the Christian principle of the Imago Dei, which is the concept that human beings are created in God's image and therefore have inherent value independent of their utility or function.  This religious principle is what allowed Fray Bartolomé de Las Casas to conceive the idea of international law: a law that would apply beyond the confines of Christendom to include every known and unknown human being.

Only in a very sick society could we read the media simultaneously lionizing the people who argue that a chimpanzee should be treated as persons while ridiculing and chastising politicians that believe that our legislation should recognize unborn human beings as persons.

And this religious concept is also what inspired John Locke to formulate the principle of human equality and the consequent requirement for governments to obtain the consent of the governed.  It is no stretch to say that the principle of the Imago Dei based in Genesis 1, 26-28 gave Thomas Jefferson and the founding fathers of the United States, and every constitutional republic thereafter, the moral and philosophical underpinning for the creation of the modern political world as we know it.

And this is where Tommy the chimp’s status as a person gets interesting.  The animal rights activists, represented by attorney Stephen Wise, argue that because chimps “posses self-awareness, empathy, elements of culture, complex memory and recognition of death”, they should be considered legal persons.  If they are persons, the argument goes, then their confinement should give them cause for a writ of habeas corpus (whereby the custodian of a prisoner is made to prove that there is a legal justification for the detainment.)

Applying the same standards that animal rights activists are using to argue for animal personhood, the abortion industry (and its legal and political cabal) argue that at his or her earliest stages, human beings are not possessed of the necessary qualities of  persons and therefore their killing is justified.

Under this alternative theory of rights based on ability rather than humanity, Peter Singer (Professor of Bioethics at Princeton University) openly argues that legal abortion should extend after birth into infanticide, and that pigs should have more rights than a newborn.  As disgusting as Professor Singer’s views may seem to us, at the very least Mr. Singer applies the non Imago Dei logic correctly:

“The argument that a fetus is not alive is a resort to a convenient fiction that turns an evidently living being into one that legally is not alive. Instead of accepting such fictions, we should recognise that the fact that a being is human, and alive, does not in itself tell us whether it is wrong to take that being's life.”

The “press” should make advocates of abortion and animal personhood defend the conclusions of their logic, but of course, they don’t.  For as Professor Singer sincerely states, some would rather resort to “convenient fictions” to justify their unsavory positions.

And that brings us back to the second cluster of “personhood” in the news, and that is universal human personhood.  Convenient fictions aside, science is unequivocal regarding the developmental stages of the human being.  Every human being’s life started as a zygote: that single cell that packs the punch of a big bang.  The scientific recognition of the start of a human’s life along with the religious commandment to protect all innocent humans is what has led the pro-life movement to declare that the right to life should begin at conception.

The phrase that life begins at conception has a nice flow to it, and generally, pro-life politicians embrace the sound of it, even if they almost never fully embrace the logical conclusions.  For there is nothing like being accused by the media of attempting to outlaw “commonly used forms of birth control” to break up the sweet flowing sound of “life begins at conception.”

If you don’t believe me, ask Colorado Republican Cory Gardner, who after coming under Democrat and mainstream media fire for supporting personhood and the idea that fundamental human rights begin at conception, has suddenly become the most outspoken advocate for “affordable, over the counter contraception.”  Of course, by “contraception” he means chemicals and devices that may or may not kill a developing human being, but those are just details, right?  Or ask Dr. Rand Paul, now a presumptive presidential candidate, who after being the prime sponsor of a federal personhood bill, blithely stated that of course he supports the abortifacient morning after pill.  Add to that the repudiation of personhood by Republicans Joni Ernst from Iowa and Thom Tillis from North Carolina and you get the drift.

Democrat strategists think they have a silver bullet, or based on the number and repetitive nature of their attacks it is more appropriate to say that they have a couple of silver mines, bullet factories in Washington DC consultant firms, and machine guns in every news room in America.

Only in a very sick society could we read the media simultaneously lionizing the people who argue that a chimpanzee should be treated as persons while ridiculing and chastising politicians that believe that our legislation should recognize unborn human beings as persons.

So what are we pro-lifers to do?  Repudiate our principles in the face of attacks?  Treat the American constituent like “low information voters” and try to pitch them the convenient fiction that we “support life” but don’t really care to think through the details?  Should we tell and believe these little lies in order to get “our people” into office?

I think that this election cycle will prove that specially on fundamental questions, running away from your principles does not help you.  Running scared only puts blood in the water that attracts the sharks to come and bite your limbs off.

Ronald Reagan, who Republicans love to emulate, wrote his pro-life treatise, Abortion and the Conscience of the Nation, while still in his first term.  In it, he stated his open support for personhood:

“The Congress has before it several measures that would enable our people to reaffirm the sanctity of human life, even the smallest and the youngest and the most defenseless. The Human Life Bill expressly recognizes the unborn as human beings and accordingly protects them as persons under our Constitution.”

Has America deteriorated to the point where Republicans have to run away from Ronald Reagan?

In school, running away from a fight makes you a sissy, in modern American politics, well, it still makes you a sissy.  Even after all the anti-bullying education out there, everyone knows that the best way to get rid of bullies is to stop being a sissy and confront them.

In the age of the dreaded female vote – that mass of proletariat who allegedly want nothing more than to abort as many children as possible for as low a cost as possible – it would be refreshing for a politician to man up.  And by that I mean to be an intellectual and political leader.

Politicians and other leaders must deal with the fundamental issue of the right to life with logic and faith.  Point out that it is abortion advocates who have to answer to young women as to whether the “contraception” that they are pushing down their throats is causing them to kill their unborn children.  Make abortion advocates tell the American people what logic they would use to guarantee human rights.  If it is only “possessing self-awareness, empathy, elements of culture, complex memory and recognition of death” then make them face the fact that by their standards chimps would have rights under our constitution but full term, viable fetuses would not. Maybe even explain that the very reason that we have animal rights in the first place is that we humans see some reflections of our humanity in certain animals, and that the characteristically human traits such as self-awareness, bonding, memory etc. reinforce the idea that humans have an inherent value independent of anything else.

America is under a siege of ideas, immersed in a philosophical existential battle.  The battle is far past political elections and parties.  Both animal rights activists and abortion advocates seek to destroy the concept of inherent human rights founded upon the principle of the Imago Dei.  To fight this evil empire we don’t need more John Boehners, we need more Ronald Reagans.

There is a reason why freedom has flourished in Judeo Christian nations.  As Locke posited, men and women were created free and equal, deriving their value not from a particular nation state but from their essential humanity and from God.  That which caused the fall, the temptation to play God, to decide who lives and who dies, is what is destroying Christendom.

Perhaps though, we have reached a new low, for as the battle over personhood illustrates, not only do we want to decide who lives and who dies, but we also wish to be The Creator, making animals in our own image.  For how else can granting human rights to chimpanzees be described?

These may seem like farcical situations but they are symptomatic of a society in dire need of intellectual leadership.

If a politician asks for your vote but doesn’t know where our freedom comes from or is unwilling to stand up, articulate, and defend his ideals consistently, then that politician does not deserve your vote.  After all they may end up defending the rights of chimps over those of children.

Universal human personhood must be our litmus test.  The future of the world depends on it.