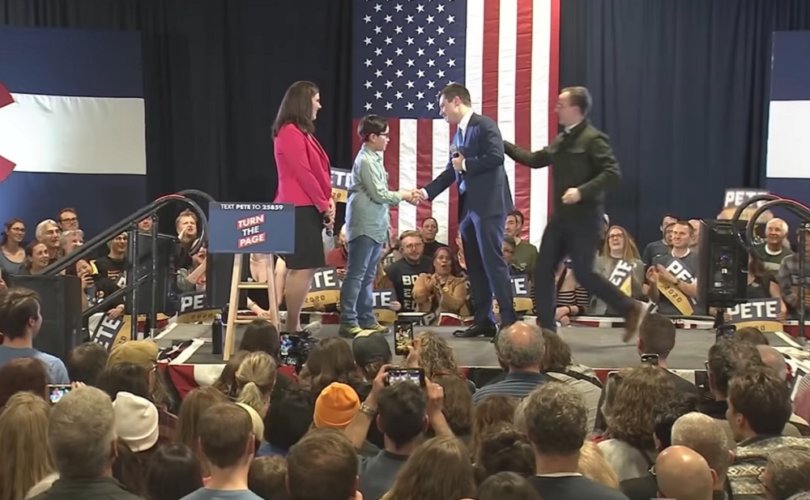 February 26, 2020 (LifeSiteNews) — The stage-managing of children for the depraved goals of homosexuality and gender rebellion needs to come to an end, right now.

Pete Buttigieg, the South Bend, Indiana mayor running for president, affirmed  a nine-year old boy’s “gay” identity in front of a cheering Denver crowd. The episode had all the earmarks of a set-up, with this boy being the pawn in a high-stakes game.

The least qualified presidential candidate in recent history, who is also a proud homosexual, needs to leave children out of his heretical, artificial quest for significance.

He just ironically achieved it. Mayor Pete has most assuredly secured a place in the “millstone” camp (Matt. 18:6) where a terrible fate awaits him — unless he repents.

Along with the recent boy “drag” performers featured in homosexual parades, on national TV, and in Ohio bars, this sweet-looking boy is the latest victim of “LGBTQ” child corruption for public consumption.

When is America going to blow the whistle — and call the cops — on these morally corrupt, phony adults?

I will be the first to say it. I am “phobic”— of dangerous sexual anarchists who prey on children. It’s because I hate evil, since I love what God declares to be good.

And this display is no good.

Mayor Pete and the drag queens at the library story hours should hang out together after the next campaign stop. They have a lot in common. Perhaps that’s already happened.

I think we would be shocked to know what heartlessness lies at the base of this campaign — and lies in America’s future with this candidate.

God is still merciful and will redeem the most egregious of human iniquities, even leading a child into probably decades of sin entrapment as well as current public humiliation, even if he doesn’t understand it yet.

Unless a boy has been carefully groomed by clueless parents, wayward teachers, or apostate pastors, no nine-year-old staunchly identifies as homosexual. And no responsible adult should enable that identity. Just the opposite should occur.

No one is born that way — not this boy, not Mayor Pete, nor his partner, Chasten. Something or someone led them all down the path of sodomy ideation, and when it’s a nine-year-old boy, it’s child abuse.

For a whole host of reasons, beginning with his rejection of God’s design of him as heterosexual, Mayor Pete is totally untrustworthy — on moral issues, certainly on the protection of the unborn, and on national security.

He will sell out a nine-year-old boy on a national stage for his own selfish purposes and delude him into thinking that’s “brave.” He has misquoted and bastardized Scripture to justify his own lifestyle and progressive pablum.

Of course he would sell out America. Can there be any doubt?

And he’s a clear and present danger to faithful Christians. I can see Buttigieg coldly signing the documents for our transport on trains to “re-education” camps without missing a beat.

Because if there’s one thing coming through loud and clear — climaxing in this child endangerment stunt — it’s that he is callous, corrupt, and immature. Pete does not get the humanity thing, nor the virtue thing, nor the nobility thing.

He does not care about children. He is not a father. He has rejected that path, unless he and faux hubby construct yet another phony platform — parenthood by “two dads.”

At least his artifice is consistent. He dismisses all the Scripture about the “abomination” of his own practices and preferences and dismisses Christ’s definition of marriage (one man, one woman). He dismisses God’s description of knitting babies together in the womb in favor of far-left Democrat wisdom, that we wait until a child takes his first breath to determine the child’s worth.

Human rights? Only if Mayor Pete gives you the nod. This is why Christians cannot trust him, and no Christian should ever, ever vote for this carpetbagger.

But he says he loves the Jesus who teaches us to care for the poor. It’s the same Jesus, Pete. The same God. The sexually moral Jesus and the designer of male and female distinctions — without confusion — is the One who also feeds the thousands.

He’s the One who would forgive Mayor Pete, if he sincerely repented before Him.

Not so with the untrustworthy god that seems to occupy Mayor Pete’s limited imagination. The one who leads little boys into proudly and publicly declaring a preference for males instead of females — to help an adult male homosexual’s political ambitions.

That would not be a god. That’s a demon.

And America should run from demons, as well as from mayors who flirt with them.