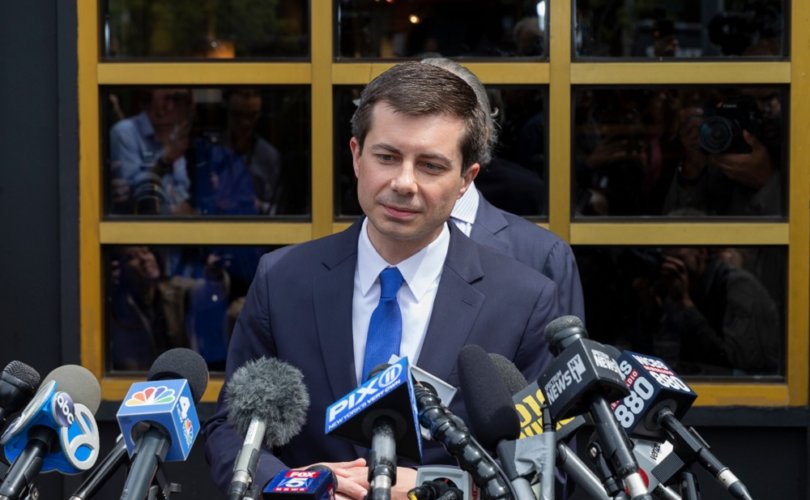 July 30, 2019 (American Thinker) — Politicians have a constitutional right to be stupid, but Pete Buttigieg is taking advantage of that right. Pete is wrong about religion, abortion, and homosexuality. I don't want someone with three major failures in the White House.

In a recent conversation with USA Today, Buttigieg characterized conservative Christians as “saying so much about what Christ said so little about, and so little about what he said so much about.” Pete was using the absence of evidence argument — i.e., since Christ didn't prohibit perversion, then criticism of LGBTQ crowd is wrong. However, that is fallacious, since Christ didn't speak about cannibalism, but I assume, though not sure, that Pete would not defend it. Pete is parroting the same silly, shallow argument that Christ's words are more important than other Scripture, but that undercuts scriptural authority. If a statement is in the Bible, it is to be properly interpreted by the context.

If it is biblical, it doesn't matter whether Christ said it or not. Moses and the Apostle Paul surely made it clear that perversion is an abnormality, an aberration, and an abomination.

Pete is said to be a “devoted” Episcopalian. I'm not sure if that means he goes to church three times a week, tithes, and says grace at every meal. Professor Gary Dorrien of Union Theological Seminary said, “In our time, the Episcopal Church is a generally progressive denomination that ordains gay and lesbian bishops, makes room for liberation theology.” The denomination wandered far into left field many years ago, as almost all groups do.

Their pews are empty, as are their offering plates, sure signs of coming death.

The flagship church in the Episcopalian denomination is the National Cathedral in Washington, D.C. One of their leaders invited a hundred Muslims to use the cathedral for Friday prayers, and the staff covered all crosses and anything that might offend the Islamists. Officials have marched in “gay” pride parades. The National Cathedral still in good standing with the denomination and is even the most famous in that group.

One pro-Pete commentator opined, “The Episcopal Church of America accepts gay parishioners, priests, and bishops in churches that recite the Nicene Creed every Sunday and have as authentic a claim to 'orthodoxy' as any other church and more than many.”

No, that dog won't hunt.

Everyone with a modicum of knowledge about history knows that all the mainline denominations give lip service to the Bible but departed from it generations ago. Moreover, Episcopalians of today are far from what they were in George Washington's day. No denominational official is willing to admit, “As a group, we have departed from our roots and are occupying buildings built by people who were narrow-minded fanatics.”

Moreover, after choosing the lifestyle of homosexuals, Pete has taken on all the baggage that most homosexuals possess. A person may experience homosexual desires, but that does not mean he was created homosexual. Furthermore, because a person reacts to that desire does not make him a homosexual. It only means he is a stupid sinner, like all of us. Even the thought of unmarried sex is wrong, whether abnormal or normal. Practicing homosexuals are people who were born heterosexual and are rebelling against the God-ordained plan for their lives.

If a person obsesses over normal or abnormal sexual thoughts, it is wrong and dangerous and indicates a corrupt mind and heart. God says, “For out of it [the heart] are the issues of life.” We often do what we think about.

People change all the time, so counselors should not tell people they cannot change their sexual desires. Of course they can.

In February 1992, a cover story for Newsweek featured the face of an infant and the question “Is This Child Gay?” In July 1993, The New York Times ran a story titled “Report Suggests Homosexuality Is Linked to Genes.” No, the child was not “gay,” and homosexuality is not linked to genes.

Recent research at Johns Hopkins reveals that there is no scientific support for “born that way” origins of perversion. Even some honest homosexuals declare that they were not “born that way.”

During the last twenty years, there have been eight major studies of identical twins in Australia, the U.S., and Scandinavia, and all arrived at the same conclusion: homosexuals were not “born that way.” Since identical twins have the same DNA, if one is gay, then both should be. However, that happens only 11% of the time. The report reveals, “If homosexuality is caused by genetics or prenatal conditions and one twin is gay, the co-twin should also be gay.” But the proof is in the testing, and the results disprove, or at least do not support, “born that way.”

Pete sought to defend his choice of being a homosexual by responding to Vice President Pence, saying, “A problem with who I am, your problem is not with me — your quarrel, sir, is with my creator. If me being gay was a choice, it was a choice that was made far, far above my pay grade.”

Pete is wrong. He chose to follow his inclinations, desires, etc., into the dark night of perversion, and he chose to “marry” a man. He chooses to participate in some homosexual activities.

You can bet the farm that no reporter will ask Pete about that.

Pete is also as wrong about abortion as he is about perversion. “I don't think we need more restrictions right now,” the mayor said. “I just believe that when a woman is in that situation and when we're talking about some of those situations covered by that law, extremely difficult, painful, often medically serious situations where life or health of the mother is at stake, the involvement of a male government official like me is not helpful.”

The translation of the above political gobbledygook is, kill the babies. I don't want a baby-killer in the White House.

Pete also said, “Christian faith is going to point you in a progressive direction.” No, that is not found in the only book that guides Christians. The Bible does not support unlimited government, high taxes, free college tuition, reparations, and climbing in bed with Muslim terrorists.

No, the Christian faith does not point in that direction. I think Mayor Pete needs to stay in South Bend and repair the potholes.

Dr. Don Boys is a former member of the Indiana House of Representatives who ran a large Christian school in Indianapolis and wrote columns for USA Today for eight years. Boys authored 18 books, the most recent Muslim Invasion: The Fuse is Burning! EBook is available here with the printed edition (and other titles) at www.cstnews.com. Follow him on Facebook at Don Boys, Ph.D. and visit his blog.