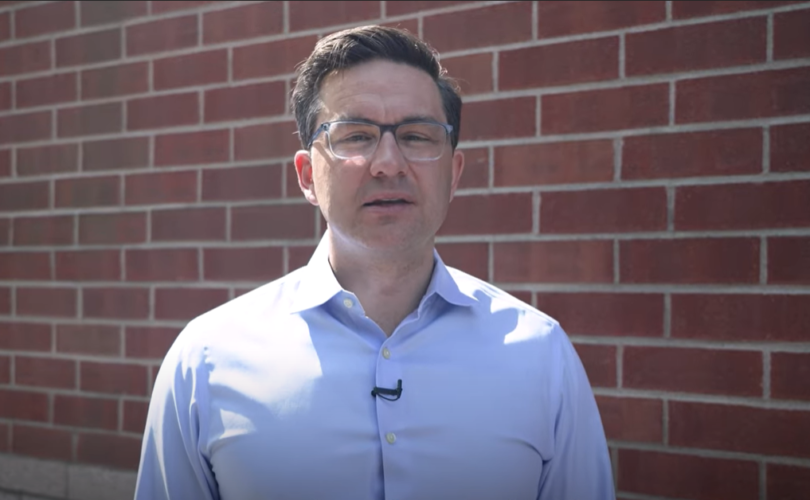 (LifeSiteNews) — Conservative Party of Canada (CPC) leadership hopeful Pierre Poilievre, in his main video message to Canadians on his campaign website, points nostalgically to a past when government was small and citizens were “big.”

In that video, and throughout his campaign, Poilievre repeatedly describes freedom — especially the economic freedom of a free market economy with few controls or “gatekeepers”— as the greatest goal for Canada.

If Poilievre wins the current CPC leadership race, he will be a party leader more focused on a free market economy than any Canada has yet seen.

Where did Poilievre get his ideas about freedom? Are they accurate?

And what about the religious language that gives the video its grand finale? Is that accurate?

Why not ask a scholar of Western politics, Western history, and Christian thought— or all three?

I spoke with Dr. Kevin Flatt, Professor of History and Associate Dean of Humanities at Redeemer University, a Christian liberal arts university in Ancaster, Ontario. Flatt teaches courses in the programs of History, International Development, and Politics and International Studies.

While speaking with him, I got a whole lot of history — and even a download on how understanding Western culture can help pro-lifers hone their message.

My conversation with Flatt began with the part of the video he found most “striking”— the quotation from Victorian poet William Ernest Henley’s poem “Invictus,” which acts as a climax to Poilievre’s video.

To conclude his call to “make Canada the freest nation on earth,” Poilievre cites the closing lines from Henley’s poem, where the speaker declares, “I am the master of my fate,/ I am the captain of my soul.” Poilievre alters the wording from “I” to “you” to make the statements apply to viewers.

Those lines “jumped out at me,” says Flatt. “It is such a religious-sounding statement— so clear in affirming individual autonomy as a kind of sacred value.”

“I can’t fully affirm that perspective as a Christian, even though I found much else in the video that I could affirm,” Flatt says, calling individual liberty “an essential principle for law and government, but not a sufficient philosophy to give meaning to all of life.”

Yet Flatt says he understands why Henley’s quotation might appeal to Poilievre and his viewers.

Individual freedom as the focal point

Individual freedom has been the focal point of Poilievre’s campaign, says Flatt; such freedom is also a central, “very deep-seated theme of modern Western values – both political and otherwise.”

In a context in which people think “there is no higher purpose that we can agree on,” people look to government only to “create a system for people to pursue their own goals.”

Flatt considers the Henley quotation “an apt summary” of Poilievre’s philosophy. He states that since the CPC party is at “an intersection of social conservatives and libertarians – conservatives who promote liberty in a classical sense,” the quotation will “likely resonate with many in the CPC and with Canadians, in general.”

Freedom intends to give dignity, limit a ruler’s power

How did we in the West arrive at such a strong emphasis on individual freedom — to the point where a political leader can present it as a sacred value?

On the up side, Christians, throughout the centuries, have emphasized that all humans are created in the image of God and so must be treated with dignity.

On the down side, Christians have long recognized that because of human sin, the powers of monarchs needed to be limited with checks and balances. Both the English political tradition and the American Constitution include these checks and balances on the power of leaders.

Flatt says that with the coming of secularization, over 200 years ago, individual liberty took on a new meaning.

Without a sense of human purpose bestowed by God, society was left without an overarching goal.

In a secular culture, says Flatt, “We do not know what humans are for, so we let everyone pursue their own goals.”

Freedom as a cue for human dignity now becomes a communal free-for-all — and, morally, often a free fall.

‘Why does freedom matter?’

Returning to Poilievre’s campaign, Flatt muses, “If I could ask one question of Poilievre, it would be, why does individual freedom matter? In other words, what is your view of the universe?”

Flatt says in the West, fragments of a historical legacy of Christian faith persist in political documents — such as the vague references to God in the Canadian Charter of Rights and Freedoms— and “still resonate with people.”

Without references to God, “we don’t really know to what we can appeal to build a common life together.”

Flatt says that Christians watching Poilievre and the current CPC leadership campaign “can partially cheer along the concept of freedom.”

But Flatt adds that, taken out of its larger context of responsibilities to family and to nation, “freedom can become an idol and can become dangerous.” Flatt notes that the creed of satan, in Milton’s Paradise Lost, is that he would rather reign in hell than serve in heaven.

Yes, individual liberty is important, Flatt summarizes, but “it is not the single, sacred value that overrides all others.”

Flatt notes, “If we make our core value a rejection of any law above our own will, we are engaging in a spirit of lawlessness, as Paul describes in 2 Thessalonians (2.3).

As Christians, we need to ask, what are the limits to individual freedom? For what are we using our freedom?”

Looking farther back — and farther afield — than the Christian West, Flatt (citing American Jewish sociologist Philip Rieff) notes that every human society (apart from the modern secular West) has been based on the concept of a sacred/social order.

All societies — including ancient Chinese, Indian, and Egyptian — held that the social order must mirror and participate in a sacred order.

With modern secular society comes the new concept that “there is nothing above human beings—or, if there is, we do not know what it is. So there is no transcendent law or model for how we run government, family, or any other institution.”

Says Flatt, “We are in a 200-year-old experiment to have a secular social order. We have set aside Christian thought when it comes to social arrangement.”

Flatt points out there were some plausible reasons for this relegation of faith to the private sphere —such as the desire to allow people of other religions or of no faith to participate in society.

When pushed out, the sacred ‘returns through the back door’

Yet the result of pushing out concepts of God and moral law is that they inevitably return in other forms: “If we try to remove the sacred order, it comes in through the back door,” says Flatt.

Political ideologies become idolatries, he says, quoting David Koysis, Fellow in Politics at the St George’s Centre for Biblical and Public Theology in Burlington, Ontario. Koysis, author of the influential Political Visions and Illusions (2003), identified ideologies as idolatries — an absolutizing of an aspect of God’s creation that begins to direct our lives.

For example, communism or fascism function as a secular religion.

Flatt notes that liberalism can become an idol, as well, when freedom is claimed to be “a sacred value, an end in itself.”

Instead of having sacred concepts — like “liberty rooted in Christian love”— we have “political philosophies that take on the role of the sacred.”

Flatt notes that when we try to “bracket out religion from our lives, people seize upon things” to fill the gap.

On the right, freedom can be such a value. On the left, social and racial justice “can inspire such intense devotion” that social action seems a religion.

Flatt observes, “If these values are not part of a larger framework, uniting around them can tear society apart.”

While Christian societies of earlier eras had many flaws, the Christian faith did “provide a common language to pull people together,” notes Flatt.

Now, says Flatt, “What unites us will continue to be a problem” since “we don’t know the goal of humanity.”

Flatt notes that the theorists of the modern political state thought that a free market economy could harness self-interested motives so that overall society would benefit. But, he adds, these thinkers developed their ideas in a largely Christian context — and so would have assumed that private charitable activity would be widespread and would “smooth some of the hard edges of self-interest.”

Of interest here is a new collection of essays just published in June by Jordan Ballor, senior research fellow at the Acton Institute for the Study of Religion and Liberty (based in Grand Rapids, Michigan). The collection, entitled Theology, Morality and Adam Smith, points out the Christian sources and contexts for the theories of Smith, dubbed “the Father of Economics.”

This collection falls within the mission of the Acton Institute to promote a society that is “both free and virtuous.”

One of the most devastating results of our culture’s elevating of individual freedom to a sacred status is the “absolute travesty” of abortion and euthanasia, says Flatt.

Flatt quotes Carl Trueman, author of The Rise and Triumph of the Modern Self (2020), to point out that in modern society, individual identity is asserted by “unbridled sexual activity.”

Action to end abortion is seen to “threaten autonomy over my own body as well as control over my own sexuality, so it is a double threat,” to modern notions of identity, states Flatt.

Flatt observes that the large population of people aging in Canada is contributing to increasing acceptance of euthanasia: “One way to assert autonomy is to say, I choose when I go. It’s connected to the absolutizing of individual freedom.”

Flatt says such arguments ignore the fact that much of our lives is beyond our control — including when and where we were born, our parents, and more.

Appeal to instinct to protect from harm

How can pro-lifers challenge this idolatry of personal freedom at any cost?

Flatt refers to the research of Jonathan Haidt, an American social psychologist and the author of The Righteous Mind: Why Good People are Divided by Politics and Religion (2012).

He states that in the West, the final two are downplayed, with the first and third being the most pronounced.

With one of the few strong moral instincts left in Western culture being an instinct to care for those at risk, Flatt states that pro-lifers would do well to appeal to this instinct to protect the preborn.

Flatt adds that ultrasound technology is “a gift” to the pro-life movement in this regard, since it shows so clearly that the fetus is a human being.

The instinct to protect others from harm may be one final basis for moral agreement in modern Western society — something that might curb a desire for unrestrained individual freedom and prompt people to protect life — if, that is, we can agree on who is human and thus worthy of care.