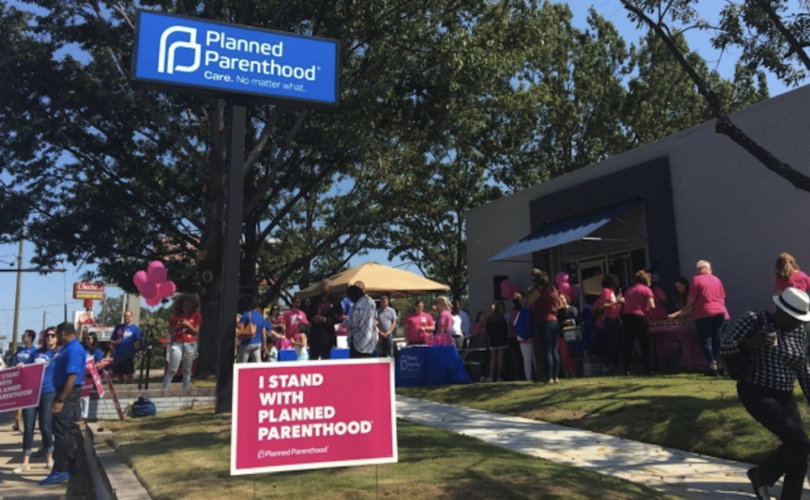 September 13, 2017 (Pregnancy Help News) — Like a broken clock that’s right twice a day, you can count on Planned Parenthood to tell the truth every now and then. It’s just that, when the truth is out, it’s about as ugly as you can imagine.

Take the most recent example, an NPR news report out of Atlanta — a glowing look at Planned Parenthood Southeast and the abortuary it opened on the east side of Atlanta on Saturday, September 9.

Celebrating the new East Side location, which effectively replaces a downtown facility that was shut down in March 2016, Planned Parenthood Southeast president Staci Fox reminded the world about the long-term business strategy for the nation’s leading abortion chain: Target minorities and poor people, then profit off them through abortion.

“Predominantly our patients are about 15-29 years old, women of color living at 150 percent or more under the federal poverty level and those are the women who qualify for Medicaid,” Fox told NPR.

Each year, over 33,000 preborn children are aborted in Georgia — each representing a boost for Planned Parenthood Southeast's bottom line.

Presiding over a three-state affiliate that brought in a record $8.7 million in 2015 — including $2.6 million in “program service revenue,” better known as “abortion fees” — Fox was joined at the ribbon-cutting by U.S. Representatives John Lewis and Hank Johnson, who are both members of the Congressional Black Caucus.

Rep. Lewis made his mark as a civil rights leader walking alongside Martin Luther King Jr., but has long supported abortion on-demand — including a vote in favor of partial-birth abortion — earning a 100 percent rating from NARAL Pro-Choice America.

Founded by eugenicist Margaret Sanger, whose stated purpose was to purify the human race by ridding it of “human weeds” she considered a “clog” to society, the overwhelming majority of Planned Parenthood abortion clinics — including the new site in East Atlanta — are located within walking distance of predominately black or Hispanic neighborhoods.

While Blacks and Latinos make up just 13 percent and 18 percent, respectively, of the U.S. population, they combine for 53 percent of abortions each year, according to the pro-abortion Guttmacher Institute.

Planned Parenthood, Guttmacher and abortion supporters in the media and political spheres consistently deny that abortion disproportionately robs the lives of the unborn in minority and low-income communities, but their bottom line tells a far more accurate story.

You can add those unwittingly truthful comments from Staci Fox to the list admitting the fact that Planned Parenthood targets minorities and poor people.