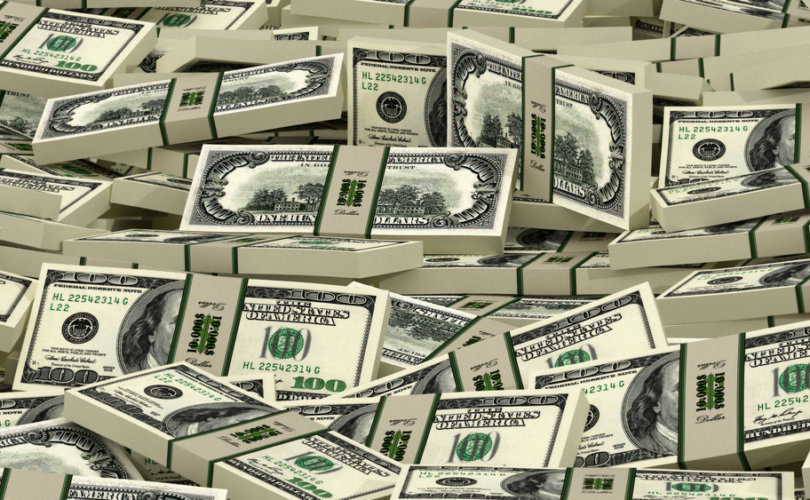 November 4, 2016 (DailySignal) — In the past three election cycles, Planned Parenthood’s advocacy and political arms, employees, and their families have spent over $38 million to elect or defeat candidates for federal office who decide how much taxpayers subsidize the nation’s largest abortion provider.

“If PP wants to provide Zika services, they are awash in cash. They don’t need taxpayer dollars to do it.”
—@AllianceDefends’ @CaseyMattox_

From the 2012 election cycle through the 2016 cycle so far, the political action entities, employees, and families of employees of Planned Parenthood and its affiliates devoted $33.9 million to outside spending mostly related to electing Democrats, according to data compiled by the OpenSecrets project of the Center for Responsive Politics.

Because Planned Parenthood is a 501(c)(3) tax-exempt organization, it cannot endorse or donate to a candidate in its own right.

In addition, individuals and entities associated with Planned Parenthood contributed a total of $4.7 million over the same four years to candidates, party committees, other political action committees, and outside spending groups or nonprofit “527” groups created to influence elections.

In the 2016 cycle, Planned Parenthood’s affiliated organizations, political and advocacy arms, employees, and their family members gave $5.5 million to Democrats, but nothing to Republicans. They spent $10.4 million against Republicans, according to the most current data, compared with less than $7,000 against Democrats.

OpenSecrets ranks Planned Parenthood at 307 among 18,081 organizations profiled whose political arms, employees, and their families contributed money to candidates, party committees, PACs, or other groups in the 2016 cycle.

The Center for Responsive Politics, a nonpartisan organization, tracks the influence of money in politics.

Our practice is to use the name of the organization when presenting their political financial activity, whether it’s lobbying expenditures, or PAC or individual (employees and non-wage earning family members’) contributions to candidates, other PACs, super PACs or parties.

“You can’t divide it up,” Casey Mattox, senior counsel at Alliance Defending Freedom, a nonprofit Christian legal organization, told The Daily Signal. “Ultimately, Planned Parenthood itself is bringing in well over half a billion dollars a year from taxpayers and they want to make sure that the politicians stay in office who will keep that money coming. So, they spend money to elect those politicians.”

“Planned Parenthood stands alone as a major recipient of taxpayer funding that is also a major participant in elections,” Mattox said.

Among other findings by OpenSecrets:

Also for the 2016 election cycle, individuals and entities connected with Planned Parenthood poured over $15.9 million into outside spending, defined by the Center for Responsive Politics as “independent expenditures or electioneering communications.”

As a result, OpenSecrets ranks Planned Parenthood at No. 21 among 180 organizations the center said did such outside spending.

Planned Parenthood Federation of America did not respond to an email from The Daily Signal requesting comment on the accuracy of the spending figures and other details.

In the 2012 election cycle, President Barack Obama was one of the top recipients of related contributions, at around $71,000, according to OpenSecrets.

Planned Parenthood is “becoming even more political than they have in the past,” Mattox said. “That should be deeply troubling to a lot of people.”

Today we have a clear message for every politician who has threatened access to reproductive health care, who has said having to drive hundreds of miles to safely access a legal abortion wasn’t a ‘burden,’ and who has made offhand comments about eliminating basic health care for millions across the country: You’re about to be in for a very rude awakening.

Extremists made the 2016 election about attacking reproductive rights. Enough is enough. With our supporters, we’re launching ‘I Vote Planned Parenthood Action.’ We will organize and mobilize to elect lawmakers who are in our corner.

“I think there’s really a lot of reasons why Planned Parenthood should not be funded, but the fact that they are so politically active and spending so much money on elections should be at the top of the list,” Mattox said.

“They have pledged over $20 million in this election cycle alone,” Mattox said. “This is an organization that held up funding for Zika, for example, demanding their share of the money. All the while, they’re managing to find $20 million to spend to support politicians that they want to keep in office.”

Individuals and entities connected with Planned Parenthood also spent $2.2 million on lobbying during the 2016 election cycle, according to OpenSecrets, ranking it at 372 among 3,619 organizations in 2016. Eight out of 14 lobbyists in 2015-2016 previously held government jobs.

“If Planned Parenthood wants to provide Zika services or mammograms or anything else, they are awash in cash. They don’t need taxpayer dollars to do it,” Mattox said.

Sarah Sleem and Ken McIntyre contributed to this report.