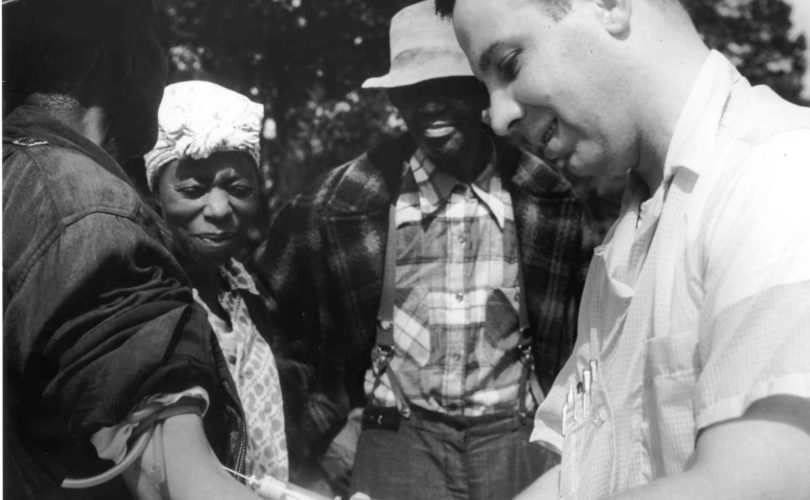 A doctor injects a patient with a placebo as part of the Tuskegee Syphilis Study.US Government

Imagine reading this headline in your local newspaper: “If the Tuskegee Experiments Were Being Run by Planned Parenthood Today, Congress Would Increase Their Funding!”

Would you be outraged? One presumes you would be, but the sad fact is that the idea is not too far-fetched. Let’s look at the facts.

Planned Parenthood’s foundress, Margaret Sanger, supported eugenics. The record is well documented. In one exposé on this subject, Tanya Green wrote about Sanger’s “Negro Project,” telling the reader, “The aim of the program was to restrict—many believe exterminate—the black population. Under the pretense of ‘better health’ and ‘family planning,’ Sanger cleverly implemented her plan. What’s more shocking is Sanger’s beguilement of black America’s créme de la créme—those prominent, well educated and well-to-do—into executing her scheme. Some within the black elite saw birth control as a means to attain economic empowerment, elevate the race, and garner the respect of whites.”

By the same token, when the Tuskegee experiment began in 1932, nobody understood what was happening and nobody knew that taxpayers were funding the grave injustices perpetrated during those experiments. It wasn’t until 40 years later that the whole story was finally exposed.

The original Tuskegee experiments involved a total of 600 black men, 399 of whom had syphilis. Not a single patient was properly informed or asked to consent. Nor were those with syphilis told that there was no treatment available for their condition. They were told the study was about “bad blood,” which was a deliberate falsification. These men were human guinea pigs for a government study, and taxpayers paid for the propagandizing that led to many deaths.

Anyone with eyes to see can immediately understand that there are undeniable philosophical similarities between what the researchers in Tuskegee did and how Sanger and her successors view minorities, not to mention all those who compose their patient base.

In each case, the equality of the human person is denied.

Today, Planned Parenthood uses the same sort of tactic on our young people that was employed at Tuskegee. Even though they are not herded into a particular government facility to participate in a test, the results are similar. Planned Parenthood’s tactic is far more devious.

Much like the Tuskegee research subjects, today’s young people who are unfortunate enough to visit a Planned Parenthood office do not receive adequate information about the birth control pill prior to ingesting it. They are not informed that the pill can kill a preborn child. They are not warned that the pill can harm them physically or emotionally, and—depending on their medical history—may even result in their death.

Our teens are human guinea pigs who are being deceived by an organization that does not hold their best interests in mind. And taxpayers are subsidizing this propagandizing of our children.

Planned Parenthood does not provide informed consent to its patients. It does not deal in facts about sexually transmitted diseases, birth control, or abortion. And still the American taxpayer pays.

The federal government took more than 60 years to apologize for the role it played in the unfortunate Tuskegee experiments. When will it apologize for the destruction it has caused to the youth, women, and families of our nation?