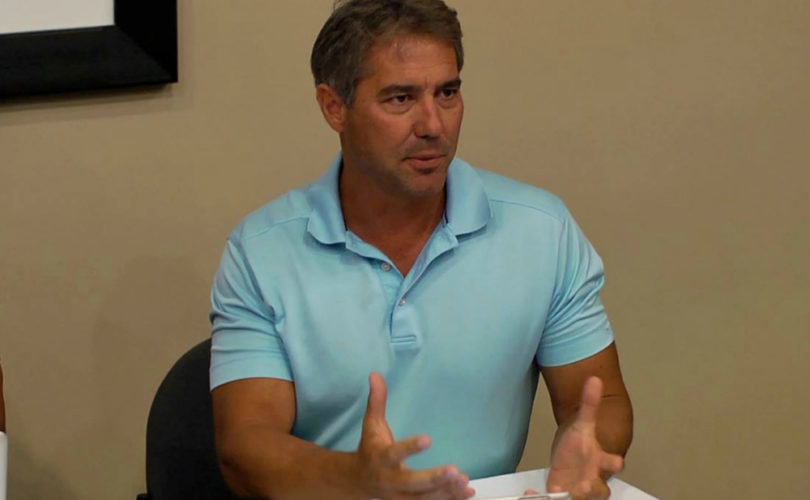 Troy Newman, a founding board member of the Center for Medical Progress, whose undercover work exposed Planned Parenthood's selling of babies' body parts.

March 13, 2019 (Operation Rescue) – By now, I'm sure you know that for years, I have been the legal target of Planned Parenthood Federation of America — the devil incarnate.

Today, I'm sitting down with the devil and his team of high-powered attorneys, who are doing everything they can to try and break me.

I'll be in depositions all day for the Planned Parenthood v. Troy Newman, et al. RICO lawsuit, which stems from my work with the Center for Medical Progress.

We may have punched Goliath in the teeth, but Goliath and his brothers got backup, and they want revenge.

Planned Parenthood's highly paid gaggle of attorneys is going to do everything they can to try and break me, but I WILL NOT BE BROKEN!

It seems like getting sued by abortionists is my full-time job these days.

This lawsuit has been going on since 2015 and will probably keep going another decade with appeals.

My attorneys are doing an amazing job, but I'm facing an uphill battle in a leftist San Francisco court.

If the people running Planned Parenthood think they can break my willpower to destroy their death machine, then they are WRONG. My hope is built on nothing less than Jesus' blood and righteousness!

I'll be locked in a room all day, forced to answer a thousand questions by the ghouls at Planned Parenthood Federation of America.

They are charging me with “racketeering” for exposing their criminal scheme to sell babies by the pound.

Yes, that's right — I'm being charged because I was a founding board member of the Center for Medical Progress, the group who published the now infamous truth about Planned Parenthood's cash for baby body parts scheme.

The bigger the baby, the more money they get for the dead baby…yet, here I am, in court with the devil being accused of racketeering…it's insane!

Planned Parenthood's attorneys subpoenaed everything — my emails, my financial records, every single thing you could imagine — and now they're going to ask me a slew of crazy questions in court.

I've been spending a lot of time preparing for this deposition in a notoriously pro-abortion state.

But that doesn't mean I've relented in my fight against the abortion lobby.

Operation Rescue has been at the forefront of exposing Planned Parenthood and putting their affiliates out of business for decades, and I won't let any legal battles — even the biggest one of my LIFE — stop me from advancing this critical work.

Thank you, and God bless you!