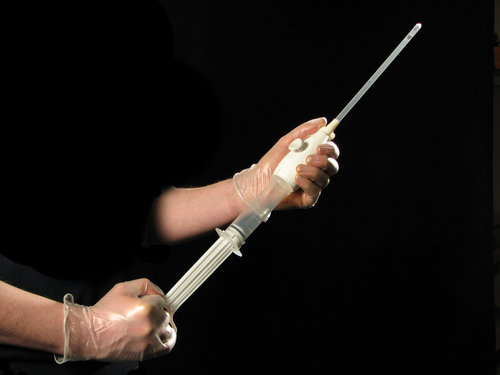 July 28, 2015 (POP) — A second video alleging Planned Parenthood’s gruesome selling of fetal body parts surfaced last week. And once again we find a senior executive of the organization, Dr. Mary Gatter, willing to put women’s lives at risk in order to make more money for the organization and for themselves.

As Gatter explains, “I wouldn’t object to asking Ian, who’s our surgeon who does the cases, to use an Ipas [manual vacuum aspirator] at that gestational age in order to increase the odds that he’s going to get an intact specimen.”

“Intact specimens”, you see, are worth more money. And Planned Parenthood gets them by using a device that regular readers of our PRI Review are all too familiar with: a manual vacuum aspirator.

Manual vacuum aspirators are murderous machines used to abort babies between three and fourteen weeks gestation. They are large, unsophisticated syringes operated by hand that work by suctioning the fetus from its mother’s womb. The baby’s delicate body is crushed and sliced as it is aspirated through a long cannula. After the abortion procedure, the baby parts are emptied into a bowl of water or vinegar and inspected to insure that all pieces are there and accounted for. One must wonder how a “doctor” can can justify abortion as he or she inspects baby parts floating in a pool of vinegar.

Manual vacuum aspiration (MVA) devices are used particularly in developing countries because they can be used without electricity. Since MVA devices require little training to operate, they are often used by non-physician abortion providers. Their small price tag and portability allow them to be widely distributed in remote locales, often in areas with poor sanitation and poor healthcare.

PRI has long documented the use of MVAs in developing regions. Unsterilized reusable MVAs have likely contributed to the spread of AIDS in Africa and STIs worldwide. The painful MVA procedure is often done without anesthesia such as in the Marie Stopes clinic we documented in Kenya. MVA devices have been reported to be used up to sixteen weeks gestation under the guise of “menstrual regulation” and “post-abortive care,” the abortion advocate’s code words for first trimester abortion in countries where abortion is illegal or largely restricted.

Planned Parenthood would stand to benefit financially from switching from VAs to MVAs. Electronic vacuum aspiration equipment is far more expensive than MVA devices. Some researchers argue MVAs can be done in the doctor’s office, saving the cost of having to invest in maintaining expensive operating rooms. Alisa Goldberg, MD concludes her study comparing MVA and VA procedures by saying as much, “Whereas purchasing an electric vacuum machine requires a large initial investment, the manual aspiration equipment is inexpensive…These factors, together with the simplicity of use…could increase the number of physicians who offer abortion to their patients in an office setting.”

MVA devices are not subject to FDA approval. PRI years ago tried to have the FDA pull the MVA abortion devices off the market but the FDA would not budge. In fact, they would not even subject MVAs to the same safety standards required of all other medical devices on the market. The FDA claims the devices do not require a pre-market review because they were available prior to May 28, 1976. New iterations of MVA devices are not subject to review as long as they do not deviate too far from their original design. Even so, according to the FDA, “manufacturers are primarily responsible for determining whether changes that are made to their device require the submission of” the proper forms.

While the FDA has refused to review the device for safety, a number of adverse reports have been filed with the federal regulatory organization including a report of uterine perforation and even death.

The lead manufacturer of MVA devices, Ipas, is not a pharmaceutical or medical device company but rather an international abortion advocacy organization. Ipas declares on its own website that it is dedicated to expanding “comprehensive abortion care.” The abortion activist organization is also actively involved in “work[ing] with nations’ ministries of health to interpret laws governing abortion in the broadest terms possible and to write standards and guidelines for abortion care accordingly to ensure access for as many women as possible.” In other words, the MVA device manufacturer is actively involved in pressuring independent nations into loosening restrictions on abortion and in finding loopholes in the law to increase access to abortion.

PRI blew the whistle years ago on Ipas’s deceptive practice of distributing miscarriage-inducing misoprostol to women in South American countries where elective abortion is illegal. When women report to their doctors, hemorrhaging from the drug, the physician completes the abortion procedure under the guise of treatment for a spontaneous miscarriage.

Ipas claims to have distributed over 800,000 reusable manual vacuum aspirator devices worldwide. Ipas asserts that this is enough to commit 20 million abortions.

As one of Ipas’s leading donors, Planned Parenthood Federation of America (PPFA) stands behind Ipas’s mission to promote abortion. In fact, Planned Parenthood is the largest abortion provider in the United States accounting for about one-third of all clinical abortions.

PPFA receives approximately $500 million every year in federal and state grants and reimbursements. Half a billion tax dollars are funding the largest abortion provider in America every year.

Last Tuesday, Rep. Diane Black (R-TN) introduced the Defund Planned Parenthood Act of 2015 which strips all federal funding to Planned Parenthood. The bill has already garnered 137 cosponsors. Sen. James Lankford (R-OK) has since introduced a similar bill in the Senate.

Americans should not be forced to subsidize an organization that sells fetal body parts for profit and procures late term abortions. An abortion giant like Planned Parenthood does not need our taxpayer dollars.

Dr. Gatter can be seen at the end of the video bartering for maximum profit while settling on a price that doesn’t look suspicious. “Let me just figure out what others are getting, and if this is in the ballpark,” Gatter says, “if it’s still low, then we can bump it up. I want a Lamborghini.”