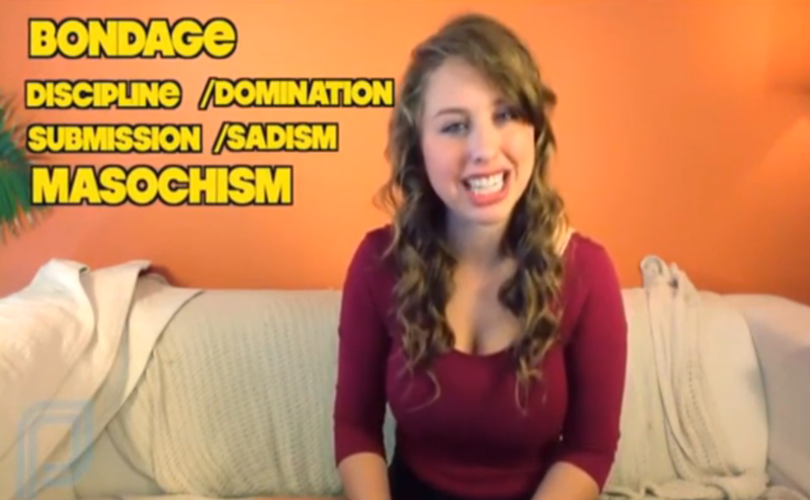 (STOPP) – Is there any perversion Planned Parenthood will not present to young, vulnerable people as “play”? Judging from the home page of Planned Parenthood of Northern New England, apparently not. The “healthcare” organization features a video storehouse known as “A Naked Notion with Laci Green,” by sporting a picture of a young lady waving a condom.

Click the link to watch the videos, and you will be greeted by “Getting Kinky—BDSM 101,” an instructional video created in partnership with Planned Parenthood of Northern New England that attempts to make sadomasochism sound like a harmless, pleasant romp in the park.

Laci states in her perky, lilting voice that October was declared National Kink Month, “and when you think about it, October and kink—they’re kind of a fitting pair,” she says. “Halloween and kink are both about adventure and fun and exploring roles and dynamics that are maybe a little bit different from everyday life.”

But the dictionary makes no such distinction about previous negotiation or play when defining sadism. Merriam-Webster defines sadism as: “(1) a sexual perversion in which gratification is obtained by the infliction of physical or mental pain on others; (2)(a) delight in cruelty; (b) excessive cruelty.”

That’s a far cry from negotiated fun, yet Planned Parenthood blatantly promotes it as pleasurable play. And its obvious target is young and otherwise vulnerable people.

“The pain at play with sadomasochism is not like breaking a bone or getting beat up,” Laci explains. “It’s about the strategic use of bodily sensations to elicit pleasure.”

If your head is reeling just imagining how these people who have consented to being bound and tortured are going to be respected by their “non-abusers” who are torturing them—and how respect and pre-negotiation are going to cause the torturer to limit his torture in wake of sexual stimulation—your head may well explode when you hear Laci’s next statement.

Rule 2 is setting boundaries. Using a “yes, no, maybe” chart is suggested as a tool. As we all know, those “maybe” boundaries are really helpful in all dangerous situations.

Rule 4 is follow-up after a “scene,” “sometimes called after-care.” It’s all about sharing feelings after doing something really intense that may bring up some difficult feelings. Cuddling is suggested.

Rule 5 is consensual respect. “Safe, sane, and consensual power exchange relies on unyielding respect for each other’s boundaries.” It’s all about following the rules, she says.

And since this is a YouTube video, at its conclusion the viewer is treated to a variety of sadistic video options for his or her personal consumption.

Students on Christmas break are likely to log many hours online. If they end up on this Planned Parenthood website, the results could be beyond devastating.

This is Planned Parenthood. This is the organization that gets $1.3 million taxpayer dollars every day of the year to perpetuate its agenda.

This video and the others in the Naked Notion storehouse proudly bear the banner “In partnership with Planned Parenthood of Northern New England.” The PP logo appears on the browser tab as the videos are viewed.

What more do we need to know? Planned Parenthood is not a healthcare organization. It is the nation’s largest abortion chain. It is a seminal source of the most unbelievably perverse and dangerous sex promotion in the nation. And it has access to the eyes, ears, minds, and hearts of our children on a daily basis, whether on their smart phones, computers, or in person in their schools. It is time to stop the madness. We must defund Planned Parenthood, and we must do it without delay.

Our Wednesday STOPP Report archives are brimming with information about Planned Parenthood’s horrendous targeting of our children. Visit our website today to learn more and to find out how to stop the blight on our communities that is Planned Parenthood. To book one of our expert speakers contact [email protected]

And please consider making your most generous donation to American Life League today to support the work we undertake every day to protect children around the world from Planned Parenthood.