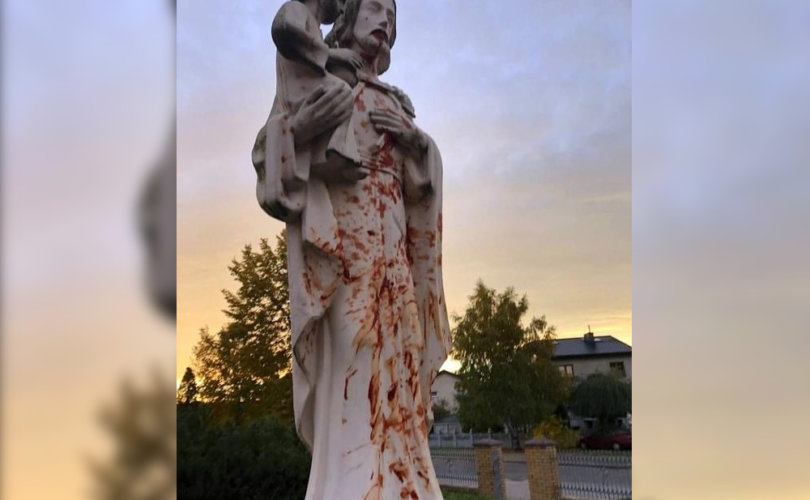 A statue in Poland attacked by abortion supporters

WARSAW, Poland, November 6, 2020 (LifeSiteNews) — Poland, a country that has gazed admiringly on the USA for decades, has now decided to copy that which is least impressive in America’s recent history — the BLM movement. She just did it in her own way.

The Poles too needed some excuse to start the destruction of the order that bored them. The problem with this was that no one here has been killed, no Polish George Floyd has died. On the contrary, it has been declared that the killing of the most defenseless, that is, children suspected of having genetic defects, is forbidden.

The Constitutional Tribunal examined the motion of 119 Members of Polish Parliament and ruled (for they could not otherwise do as such is the letter of the law) that the provision permitting abortion for reasons of the probability of a severe and irreversible disability of the fetus or an incurable disease threatening his life is incompatible with the Constitution, specifically, Article 38, Article 31, and also Article 30. There is no question of discriminating between sick and healthy children because they all enjoy “the inherent and inalienable dignity” which gives them the right to life. And contrary to media manipulations, the law still allows for the possibility of ending a pregnancy when it is a threat to the life and health of the woman, and also when there is a reasonable suspicion that the pregnancy is the result of a prohibited act, e.g., rape.

Our revolutionaries have declared, however, that BABY LIVES DON’T MATTER. They negate the value of the effort of many civic initiatives and of MPs who in 2019 submitted a motion to examine the compliance of the legal provision with the Constitution, intending to stop eugenic abortion and put an end to the killing of those most threatened by this circumstance, that is, children with Down syndrome (up to 40 percent of aborted pregnancies).

Unfortunately, winning the right to life for children with a disability has resulted in an uncontrollable explosion of rage from the populace. Yes, the movement of the indignant came from the grassroots, but it was taken over immediately from above by the radical feminist lobby, the LGBT lobby, the far-left, old communists, and of course the anti-government opposition that looks for opportunities in every riot to overthrow the government.

It seems unlikely that a country in which nearly 90 percent of citizens identify with the Catholic religion stands on the brink of such an anti-Catholic revolution. What has so distinguished this revolutionary uprising, conducted under the banner of the “Women’s Strike” with its lightning symbol, is its shocking level of aggression, vulgarity and Christophobia.

To this it should be added that the Church did not have any part in the civic initiative and even for a long time afterward maintained a silence difficult for Catholics to understand. Therefore, the attacks on priests and on church buildings have seemed all the more absurd.

The fury of the demonstrators has caused damage not only to approximately 80 churches but also to a host of monuments, regardless of whether it is John Paul II or undisputed heroes of the fight for Polish independence standing on the pedestal. Not even the soup kitchen of a Franciscan (Capuchin) center for the homeless, which serves meals to the poorest every day, was spared.

To understand the shock that this revolution is causing, you should know that there have never been wars of religion in this land and that those who have interrupted Mass here with forceful invasions have always been some kind of foreigner: Nazis, Soviets, Ukrainian nationalists, but never Poles. Even Polish communists never dared to invade churches to blaspheme and offend Catholics. The Rubicon has been crossed.

In addition, there is no logic to this revolution because it uses manipulative slogans like “The government tortures women” and “The government has triggered war.” The spoiled children of the prosperity that this conservative government has itself provided for five years have declared that democracy bores them and they need to tear down everything they please.

The problem here is that Poland is at the height of a pandemic and demonstrations of many thousands of people have functioned like biological weapons. Six days after the biggest protest, we are facing a record number of infected and dead. No government can cope with an epidemiological crisis and a political crisis at once. As a matter of fact, we are dealing with an attempted coup. At such a difficult moment, when ICUs have no beds or respirators, instigating demonstrations of thousands of people stinks to high heaven. It is as if the forces of evil have allied together in the fight.

The more corpses this epidemiological crisis devours, the easier it will be to overthrow the conservative Law and Justice (PiS) government, which bothers everyone and doesn’t fit in with today’s modern Europe, the Europe of such “human rights” as free access to abortion, euthanasia, homosexual “marriage,” etc.

The council of leaders for this revolutionary movement has issued a list of absurd demands: Abolish the government! Abolish the Church! Free abortion! A secular state! And the funniest thing of all is that the face of the women’s defense movement and their “reproductive health” is Marta Lempart, a vulgar lesbian who hates children and says so quite openly. She has also in the past had run-ins with the law.

All of this together paints a picture of the craziness into which part of the Polish nation, bored with the lockdown and stressed by the pandemic, has fallen. And there’s no hiding that some of the Poles who went out into the streets at the height of the pandemic are the “cannon fodder” of the liberal revolution led from above by the anti-Catholic Left.

However, with every passing day, the revolution seems to be weakening — and not just because of the growth of the pandemic. We hope that it was only a fleeting outbreak of BLM “a la polonaise.” Nevertheless, it must have caused St. John Paul II to break off from his heavenly banquet for a moment and look down, with disbelief and horror, at his native country. One thing we know from the lessons of history: Poland will either be faithful to her roots and her religion, or she will not “be” at all.