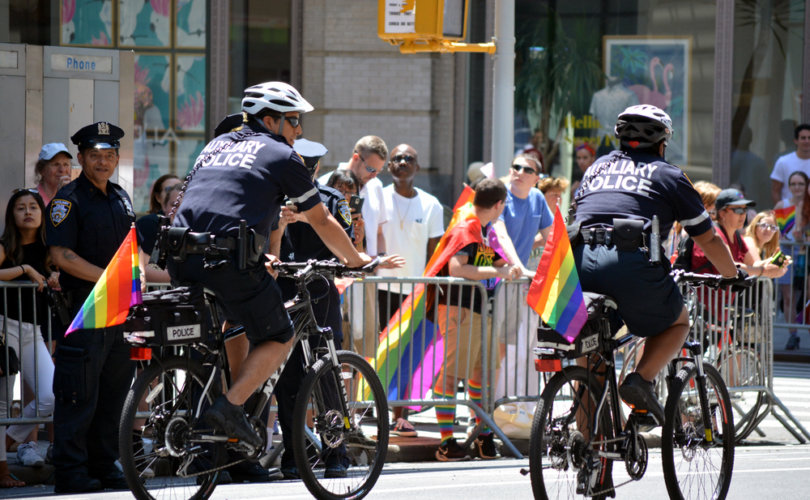 July 4, 2017 (The Bridgehead) – I’m not sure who runs the Twitter account of the Halton Police Force, but considering the warnings of experts like Dr. Jordan B. Peterson on the free speech implications of the new transgender “rights” and Bill 89 in Ontario enshrining the right to a sex change as sacred, the decision to tweet out a “Handy Guide to Pronouns” had a vaguely sinister feel.

With the cheery warning “DYK [Did You Know] If you’re not sure what pronoun somebody uses, just ask. What are your preferred pronouns?” the police force presented a “Handy Guide to Pronouns” chart, lifted from “It Gets Better Yellowknife,” of all places. The chart was full of helpful ways to utilize ze-hir-hir, ze-zem-zir and ey-eir-em.

There’s a few obvious and rather hilarious problems with this. First, nearly nobody will have any idea what you’re talking about if you start to use any of these “words,” because aside from a few woke people who are aware of Queer Theory and the current insanity gripping university campuses, nobody uses them. Then there’s the fact that the “hir” and “hir” of the pronoun “ze” sound exactly like “her,” or at least are spelled that way. Maybe they are pronounced “here.” Anyways, either it’ll sound like you’re using the wrong word or it’ll sound like you violated the human rights of a trans person by calling a “hir” a “her.” When they were making these words up, they really should have thought this through a bit better.

As for the other pronouns, they are equally ridiculous. Anyone who hears someone using “ze-zem-zir” is going to assume that person is German and has a rather thick accent, which is a far more reasonable conclusion for most normal people to make than to assume it’s a new pronoun for someone’s new identity. As for “ey-eir-em,” I have no idea how to pronounce the first two, and if anyone mentions off-hand that they saw “em wearing a hat today,” others will assume that someone named Emily or Emma with whom the speaker is on relatively friendly terms is currently shopping for headwear.

These pronouns, in other words, actually create far more confusion and problems than they solve, aside from simply being stupid. There’s something worrying about the fact that the police are tweeting out such instructions on the heels of legislation demanding such babble, but the responses to the tweet were also illustrative—of hundreds of replies, not a single one was positive. These pronouns won’t take off because nobody plans on using them, and the progressives may not have realized that while the majority of the population accepted gay marriage and moved on, the transgender craze is a step too far.

Most people—liberals included—think that things are getting a bit ridiculous. Almost nobody thinks that men can get pregnant, or that someone can live suspended between the genders while using made-up words to describe himself, or that gender is fluid. Nobody, that is, except progressive politicians, educators, and media figures, who live in a bubble of their own creation. The LGBT lobby has been incredibly successful thus far, especially on the political level. But with transgender pronouns, male pregnancies, and their heavy-handed attempts to force us all to accept their delusions, they may have overplayed their hand.