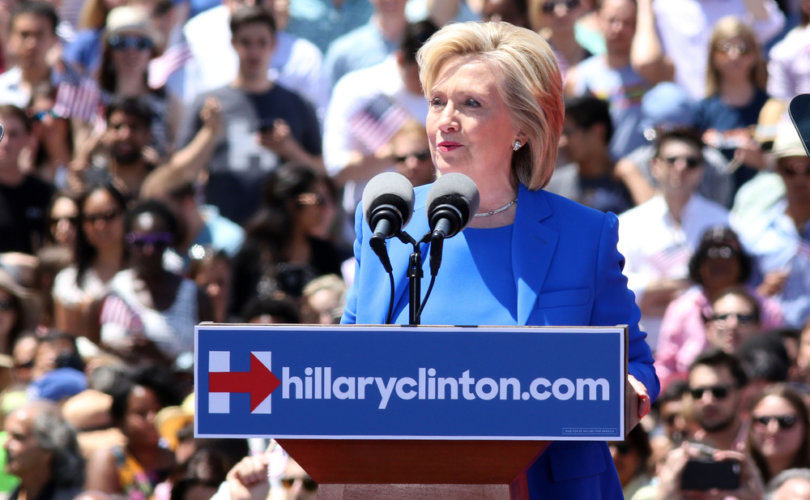 November 15, 2016 (LifeSiteNews) — As the vote counts of the 2016 presidential contest began pouring in on election night, supporters of Hillary Clinton offered a simple explanation for the results: sexism. This has become one of the rallying cries of anti-Trump protestors who have set fires in streets, thrown bottles at police officers, and blocked roadways.

Politico reported that “many women” at Clinton’s election night event in New York City “concluded that the country was sexist and rejected Clinton in a large part because she was a woman.” Among them, Democratic strategist Hilary Rosen said, “I can’t believe this is happening. People hate women.”

Likewise, Cokie Roberts of ABC News declared, “The thing we should raise, and I’m certainly getting emails about it, which is there probably is a strong sentiment about not having a woman president.”

Anti-Trump protesters have since engaged in a series of violent and other unlawful actions while chanting slogans that accuse Trump and his supporters of sexism.

A national poll commissioned by Just Facts shortly before the election casts serious doubt on those allegations. This scientific poll of likely voters posed a series of 25 questions, the last of which was, “All other things being equal, if you were faced with a choice between a male and a female presidential candidate, who would you vote for?”

After the pollers asked that question, they offered each voter the option to reply “Male,” “Female,” “It does not matter,” or “Unsure.”

Male voters and Trump voters were more likely than any other groups to say “It does not matter,” at 73% and 72% respectively. The other groups were not far behind and within the margins of error, with rates of:

The poll did not measure the intensity of preference for a male or female candidate. Thus, it cannot determine if sex outweighed all other factors and changed anyone’s vote or impacted turnout. However, Clinton’s campaign implicitly encouraged people to support her on the basis of her sex by employing the slogan, “I’m with her.”

The poll was conducted by Conquest Communications Group, a professional polling firm located in Virginia. The responses were obtained through live telephone surveys of 700 voters across the continental United States on October 11–23, 2016. The margin of sampling error for all voters was plus or minus 4% with a 95% level of confidence. The margins of error for the subsets of voters were 7% for Trump voters, 6% for Clinton voters, 10% for undecided voters, 5% for males, and 5% for females.

James D. Agresti is the president of Just Facts, a nonprofit institute dedicated to publishing verifiable facts about public policy.