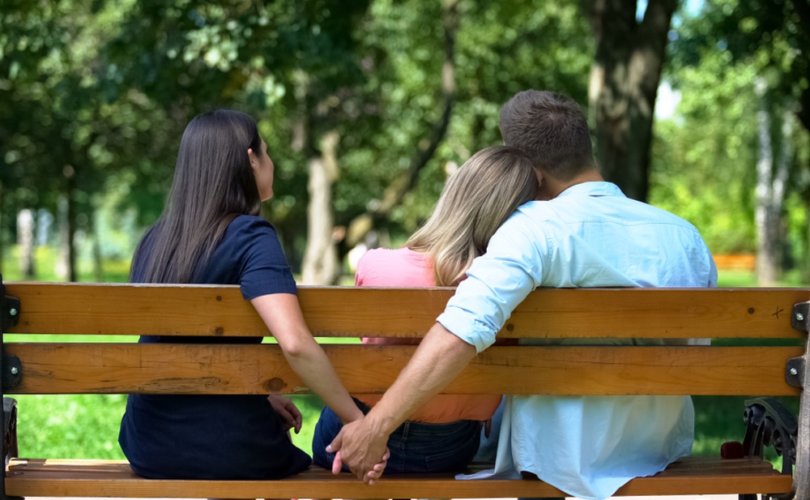 Although I was very young, the images of my father cuddling with my mom, and then my half-brother's mom still remain with me.

(ThePublicDiscourse) – Recently, I had a discussion about marriage with someone who calls herself a “Darwinian gay feminist.” I asked her, “Is there any principled reason that marriage should be limited to only two people? There is now such a thing as a ‘throuple’—a three-way relationship. Should they have a right to marry?” She replied, “A union between three consenting adults? I see nothing wrong with it. The same goes for incest. It’s none of my business.”

I take it that she was serious in her response. Given that she believes marriage should be redefined to include same-sex couples, I suppose that makes sense. If marriage is just an emotional and loving union focused on satisfying the desires of adults, then including three or more members in this union is only logical. But her position seems to discount the fact that there might be more than just consenting adults involved. What about children who are raised by three- or four-person groups?

This isn’t just a hypothetical question. Last April, the New York Post published a story with this headline: “Married lesbian ‘throuple’ expecting first child.” The youngest member of the throuple and the biological mother, Kitten, said, “The three of us have always wanted kids and wanted to grow our family.” This might be their desire, but is this right for children? Is being raised by a throuple good for children?

I am particularly sensitive to this question, because my own childhood gave me a glimpse of what it is like to be raised in such a household.

My mother and the mother of my half-brother were best friends. When they were in their late teenage years, they came from Guatemala together to the United States and developed a bond on their journey. My half-brother and I got along very well, but having the same father yet different moms in the household was confusing and troubling. It was confusing and troubling for me because I was never the center of my father’s attention, especially when he would mistreat my mom and when he would show affection to my half-brother’s mom. I hated seeing my father show affection to another woman who was not my mom.

When I was six years old, my father broke off ties with all of us and started a new family with a third woman. It was at this point that my half-brother’s mother and my mother went their separate ways. From that point onward, my mother raised me by herself.

Although this complicated romantic situation was not technically a “throuple,” because the adults each had their own beds and did not engage in three-person sexual acts, it gives a glimpse of what children would experience in such a household. I grew up seeing my father kiss and cuddle with two different women in front of me. This was the life I was exposed to until the age of six.

As a teenager, I found myself following the relationship patterns my father had modeled, even though he had not been part of my life for over ten years. I would always have two or more girlfriends at the same time.

What exactly explains this behavior? I am not sure, but I have a hunch that my childhood experiences played a major role. As an adult, I look back to my childhood and wonder: in all the turmoil and the romantic entanglements of my parents’ lives, where was the concern for my well-being? In our debates about the social and legal acceptance of polyamory, I fear that we are not sufficiently considering the children who might end up being raised by throuples. How will their future behavior be shaped by their upbringing?

Some scholars argue that polyamory is a good thing—that it is empowering for women and helps children to be more tolerant of others. According to Elisabeth Sheff, “Polyamorous relationships provide women with more power in their relationships, allows some women to reject sexual and gender roles, allows sexuality to be viewed as a source of unity among some women, and empowers women’s high sexual drive.”

But what about the children? Deborah Anapol, a clinical psychologist, interviewed adults in multi-adult relationships as well as children reared in those contexts. In her view,

Polyamory breaks down cultural patterns of control as well as ownership and property rights between persons and, by replacing them with a family milieu of unconditional love, trust, and respect, provides an avenue to the creation of a more just and peaceful world. By changing the size, structure, and emotional context of the family, the personalities of the children developing in these families naturally change. Children learn by example.

The unspoken—and untrue—premise implicit in this argument is that permanent, exclusive, faithful heterosexual marriages are based on nothing but a masked urge to “own” another human being, as if he or she were an object. Ironically, such objectification is actually more in line with the nature of polyamorous relationships, in which a partner is used to fulfill certain emotional needs but is supplemented by one or more others. Rather than committing to a single person in all of his or her complexity, weakness, and strength, those who choose polyamory try to acquire a collection of attributes that will contribute to their own enjoyment and perceived well-being.

Many attempts to defend polyamory rely heavily on the idea that such relationships bring deeper fulfillment to adults. If this is true, the argument goes, then they should be more able and willing to provide emotional support to their children and the children of their romantic partners. But such arguments ignore data on outcomes for children with non-biologically related parental figures. As David F. Bjorklund and Ashley C. Jordan observe,

In studies across a wide range of cultures, stepparents have been found to spend less money on education and food, and to spend less time interacting with their stepchildren than their biological children … The single best predictor of child abuse is the presence of a stepparent in the home. In fact, the risk of even unintentional deaths, such as drowning, is greater in stepfamilies than in intact or single-parent families.

We don’t have good data on throuples' parenting. But at least one parent in a throuple functions quite similarly to a stepparent. And the data illustrate the point that social science has repeatedly confirmed: on average, children fare better in a household with their married biological parents. Divorced and remarried parents or parents engaged in polyamorous relationships may find romantic fulfillment through such arrangements, but they do not necessarily create “a family milieu of unconditional love, trust, and respect.”

Children have the right to be loved and nurtured by the two parents who helped create them. They have the right to live in an environment suitable for the raising of a child, not one that is only concerned with the fulfillment of adult desires. If the evidence shows that the best environment for children is the one provided by their mother and father, why willingly challenge this fact of life? Why not promote it instead?

Last year, an excellent collection of essays edited by W. Bradford Wilcox and Kathleen Kovner Kline was published by Columbia University Press. Titled Gender and Parenthood: Biological and Social Scientific Perspectives, the collection contains research that demonstrates the importance of both mothers and fathers. In a chapter titled “The Effect of Gender-Based Parental Influences on Raising Children,” psychiatrist and distinguished fellow of the American Psychiatric Association Scott Haltzman observes:

Parenting styles correlate to biological differences between men and women. Women, compared to men, have higher levels of oxytocin—the hormone responsible for emotional bonding—and oxytocin receptors. Oxytocin serves to calm anxiety, reduce motor activity, and foster an increase in touch. In contrast, testosterone—present in men at levels tenfold higher than women—is correlated to an increase in motor activity in infant boys and may be responsible for higher levels of physical activities in men compared to women. Fathers and mothers both matter, particularly if each can parent in a style that reflects their gender role. The evidence suggests that efforts should be made to educate society at large, and parents in particular, that gender differences in parents are real, and, rather than be extinguished or ignored, they should be embraced.

Fathers and mothers are different, and advances in our understanding of human physiology increasingly reveal the biological factors behind those differences. The male and the female come together as father and mother to bring complementary gifts to their children. As my experience demonstrates, it hurts children to miss out on the stable love of their father and mother for them and for each other.

The Transformation of Fatherhood

I did not choose my childhood family structure—it came to me. Although the details are unusual, my experience is not unique. Many in our culture have grown up in broken homes. Luckily, it is possible to overcome one’s past and build a stable and loving family.

From the age of six, I grew up without a father. Before that time, the main message that my father imprinted in me was “have a lot of women.”

I am now in my mid-twenties. I got married last year, and we just welcomed a baby boy. To form a healthy relationship with the woman who became my wife, I had to change the way I approached love. I needed to act differently than my father did. Unlike him, I must be faithful to the woman I love, making an exclusive and permanent commitment to her. Now that we have a baby, I have new responsibilities. Because I lacked a positive father role model when I was young, I understand how much my son will need me. I want to be the best father I can be to my little boy.

Advocates of polyamory argue that having more than two parental figures is somehow valuable or good for children. My experience suggests this is not true. If marriage is redefined to include same-sex couples, there will be no principled reason to limit it to two-person couples. But if marriage is redefined, as Katy Faust recently wrote, “parenthood is redefined.” This redefinition increases the chances that children miss out on one of the greatest gifts any person can be given: being raised by the man and woman whose love brought them into existence.

James Lopez is pursuing a Bachelor of Science in Political Science at Indiana University and a Masters Degree in Philosophy at Biola University. He is the president of Biola Anscombe Society and a research coordinator at the International Children’s Rights Institute. This article first appeared in The Public Discourse, and is reprinted with permission.