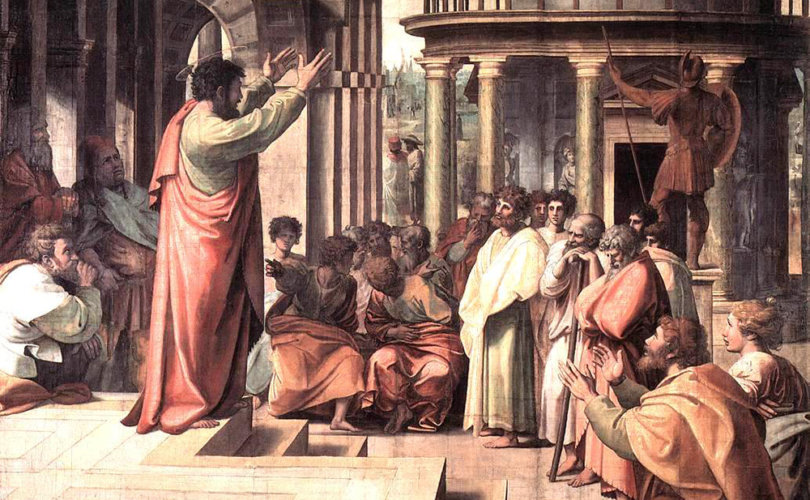 St. paul teaching in AthensWiki art: Cartoon for the Sistine Chapel by Raphael

March 31, 2017 (American Thinker) – One question seems everywhere these days: Is it time for us Christians to surrender the culture wars, and retreat? “The culture wars” seem to mean conflicts over homosexuality and transgenderism.

This question is not as new as it might seem. Consider the speech delivered by Paul at Athens’ Areopagus around the year 50.

Paul has to resist the purists on his side who allow only circumcised men into the new church, which would repel many of the pagans otherwise open to following Christ. At the same time, he cannot present Christianity as an easy-come, easy-go religion, or else it will become irrelevant and unprincipled.

Paul knows that in cities like Athens and Ephesus, craftsmen manufacture pagan icons for religious cults. They would have to lose their business to obey the rule against false idols. Paul has to strike the right tone. He faces a turbulent, multicultural moment far more daunting than the one facing us. How to save the greatest number of souls while still demanding obedience to the one holy Savior, Jesus Christ?

Circumcision struck Paul’s generation as fair game for compromise. The false idols were not up for debate. Nobody could contribute to the worshipping of phony gods and still conform to the call for total obedience and surrender to Jesus Christ. Hence Paul delivers a carefully crafted speech:

Men of Athens! I see that you are extremely religious in every respect. For as I was passing through and observing the objects of your worship, I even found an altar on which it was written: TO AN UNKNOWN GOD. Therefore what you worship unknowingly I proclaim to you. The God who made the world and everything in it — He is Lord of heaven and earth and does not live in shrines made by hands … From one man He has made every nationality to live over the whole earth and has determined their appointed times and the boundaries of where they live… Being God’s offspring then, we shouldn’t think that the divine nature is like gold or silver or stone, an image fashioned by human art and imagination.

Therefore, having overlooked the times of ignorance, God now commands all people everywhere to repent, because He has set a day when He is going to judge the world in righteousness by the Man he has appointed. (Acts 17:22-31)

As artfully as he can, Paul appeals to an aspect of the Athenians’ own culture but moves to an uncompromising stance, lest his audience hope in vain to keep commerce in idols and their salvation at the same time. The “equality” Paul offers is: “God now commands all people everywhere to repent.”

Why does Paul’s moment in the Areopagus suddenly matter to us in 2017? A certain camp of today’s Christian thinkers has come up with a story and they’re sticking to it. The story is:

Much of this retreads the calculations made 2,000 years ago. Some consider both abortion and homosexuality/transgenderism negotiable points, akin to circumcision for Paul’s generation. For others, abortion is a deal-breaker, like the false idols of Ephesus, but homosexuality is less so.

LGBT issues remain the toughest problem. The Bible explicitly condemns sodomy but the LGBT movement is vocal and strategically effective. Apologists find the ban on homosexuality difficult to explain to outsiders.

..funders like George Soros and Paul Singer have flooded religious organizations from both left and right with funds contingent upon relaxing these faiths’ ban on homosexuality. Their strategies are multifarious..

Moreover, as I learned from courageous colleagues fighting to uphold the values of Catholicism, the Southern Baptist Convention, Orthodox Judaism, and the Eastern Orthodox Church, funders like George Soros and Paul Singer have flooded religious organizations from both left and right with funds contingent upon relaxing these faiths’ ban on homosexuality. Their strategies are multifarious and seem not to rest on persuading every Christian believer; rather they contain the energies of masses they cannot convince and harness the influence of elite thought leaders whom they can.

The pressure is intense to give ourselves a painless route: Jesus without the fuss. LGBT politics seem to many people a hill that Christians do not have to die on. I have made my views known in Stream, but a loud chorus sees things differently.

Rod Dreher published a recent book, The Benedict Option, which argues for some combination of the five points above. Many of his reviewers insist he is not calling for total retreat from Christian apologetics in public life. His book has resulted in too many reviews for me to summarize here.

Suffice it to say that Dreher is part of a cozy network of Christian writers, many of whom reveal signs of fatigue and who seem to call, in various ways, for a path forward that does not include fighting against the LGBT movement. Among these ranks appear generous numbers of anti-Trump people.

Critics sometimes allege that Dreher’s coterie of #NeverTrumpers suffer from disappointment that their predictions of Trump’s losing never came true, and an implicit longing to be revered as oracles again. We should not impute motives. Yet Benedict Option seems best for people who could not vote for Trump because they could not accept any impurity in their political actions.

Through an unfortunate coincidence, Benedict Option came out just as Catholics were warring over one of Pope Francis’s decisions. The pope broke up the academy and institute named after Pope John Paul II, designed to uphold Biblical teaching on family and sexuality. The man appointed to take over the academy, Vincenzo Paglia, has a spicy history. He once commissioned a homosexual artist to paint a Last Judgment facade on an Italian cathedral, complete with orgiastic homoeroticism and gender-bending Signorelli motifs.

Less than a month after Dreher’s book came out, an epic battle within the Southern Baptist Convention came to an end as well, with apparent victory going to the more nuanced and less confrontational evangelical wing. On Monday, March 20, half a year of battles over the massive congregation’s Ethics & Religious Liberty Commission ended with top officials in the SBC calling for unity. Part of the way forward has required thought leaders to abandon the notion of forcing hardline stances on LGBT issues upon the faithful.

Whereas Pope Francis has caricatured Catholic conservatives as snide and uptight legalists who obsess too much about sexuality, a leading SBC ethicist appeared in Wall Street Journal explicitly telling Christians that they lost the culture war and should respond to the rapid expansion of LGBT clout by loving gay and lesbian people they knew. While such Francis-like stances have been cast by some as speaking “prophetically,” some Christians worry that their predictions of lost culture wars could be self-fulfilling. Others are exhausted from all this recent history and scared that LGBT activists are eventually going to round up Christians and stone them.

By now few believe that litigious, shrill, and snarky pro-LGBT militants are harmless friends and neighbors just as sweet and innocent as your average Sunday school teacher.

But amid this talk of accepting a diminished role in culture, I find myself surrounded by fired-up Christians in Texas who are “mad as heck and not gonna take it anymore!” when it comes to LGBT content forced on elementary schools. For me to take some kind of irenic option, I would have to turn away from wonderful parents I know in Texas, Britain, and elsewhere, who have to fight fiercely because if they don’t, the LGBT lobby will ineradicably ruin their way of life.

I want to be a charitable colleague and brother in Christ vis-à-vis the respectable people mulling over how to surrender gracefully, but their timing and logic appear misguided. I have taught college for almost 20 years and know that young people like sass, fire, passion, and intensity. Young people can also tell when you are talking around an issue and not being sincere. For example, let’s say you claim that you want to be loving toward gay people but you say you still want to be biblical. Skeptical millennials will know, intuitively, if either you’re too scared to admit the truth about sodomy or you’re trying too hard to keep the support from churchgoing conservatives. The nuanced and winsome approach has probably driven more young people out of the church than a staunch perspective on sexual purity would have.

Young and old, the people I know want the fireworks and passion of the real Jesus who said, “I came to cast fire upon the world, and would that it were kindled” (Luke 12:49).

And in practical terms, why would we surrender or soften now?

Less than half a year ago, the presidential candidate backed by over 80% of evangelical white Christians beat the heavily favored pro-choice candidate whose husband mainstreamed 1990s lechery and whose campaign was being run by a gay Columbia graduate. The Republicans, the party that has usually been closest to the “Christian right,” rose to a stunning majority of state legislatures and governorships. The secular Democrats’ major citadels — the media, academia, and the civil service — have all plummeted in public esteem, exposed for abuses, shenanigans, and incompetence.

Partly through sheer luck, the Republicans are now tied to policy positions that have true mass appeal: enforcement of immigration laws, justice for poor people in crime-ridden neighborhoods, a crackdown on government spying, less aggressive warring overseas, freedom to get kids out of terrible schools, and trade deals that show primary concern for American workers struggling to support their families. Even the twin shibboleths that might have made conservatives look bad in the past — pro-life and pro-chastity policy — have new appeal as Planned Parenthood looks corrupt and heartless. By now few believe that litigious, shrill, and snarky pro-LGBT militants are harmless friends and neighbors just as sweet and innocent as your average Sunday school teacher.

Amid all these entirely unpredicted events, a nation steeped in gloom and bored of Facebook and Twitter is crying out for real meaning in their lives. There is a religion called Christianity based on a Bible that begins with the creation of man and woman and ends with the wedding of Jesus Christ and his bride, the church. Marriage and sexual purity serve as real callings, foundational metaphors, and practical rules of engagement with a world that is always corrupt and dangerous.

Nothing in ancient tradition or in our contemporary context points to the wisdom in surrendering. We shouldn’t. And I won’t.

This article was originally published on American Thinker and it re-published with permission.

LGB vs. T: A crackup is looming in the LGBT community

Gay activist slams Disney: Why steal kids’ innocence by exposing them to LGBT?

New UN LGBT expert: Religious freedom is ‘not absolute,’ can be curtailed if necessary