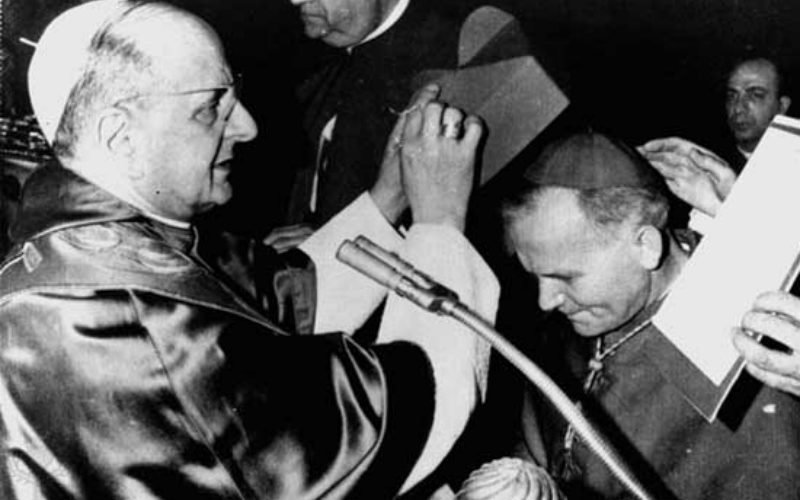 February 19, 2016 (LifeSiteNews.com) – When Pope Francis appeared to tell reporters during an in-flight press conference Wednesday that contraception can be justified as the “lesser of two evils” in cases of danger of fetal deformity, he cited the example of Pope Paul VI. However, the claim made by the pope appears to contradict the precise words contained in Pope Paul VI’s own statement on the matter in his encyclical letter Humanae Vitae of 1968.

The pope’s statement came in response to a question by a Spanish reporter who asked about the dangers of the Zika virus, which has been blamed for a rash of fetal deformity cases in Latin America. “As regards avoiding pregnancy, on this issue, can the Church take into consideration the concept of ‘the lesser of two evils?’” the reporter asked.

Pope Francis responded by insisting that abortion can never be justified, but implied strongly that contraception can. “Abortion is not the lesser of two evils,” said Francis. “It is a crime. It is to throw someone out in order to save another. That’s what the Mafia does. It is a crime, an absolute evil.”

However, the pope added, “On the ‘lesser evil,’ avoiding pregnancy, we are speaking in terms of the conflict between the fifth and sixth commandment. Paul VI, a great man, in a difficult situation in Africa, permitted nuns to use contraceptives in cases of rape.”  After reiterating that abortion is never morally justified, he said, “On the other hand, avoiding pregnancy is not an absolute evil. In certain cases, as in this one, such as the one I mentioned of Blessed Paul VI, it was clear.”

The pope’s reference to Paul VI pertains to an alleged decision made by the then-pontiff regarding a situation in the Belgian Congo during the 1960s, when nuns were in danger of being raped. The pope reportedly recognized that the women were not actively engaged in a sexual act but were passive recipients of an attack, and therefore could take measures to protect themselves from the intrusion of rapists. (UPDATE: It now appears that decision in question never actually happened.  Fr. Zuhldorf has the details here.)

However, in 1968, Pope Paul VI not only appeared to condemn the reasoning cited by Pope Francis in his in-flight press conference on Wednesday, but expressly rejected the same words Francis himself used.

In paragraph 14 of his celebrated encyclical letter Humanae Vitae, Paul VI condemns both abortion and sterilization as a means to avoid pregnancy from sexual intercourse as “absolutely excluded” as moral options. He then adds: “Similarly excluded is any action which either before, at the moment of, or after sexual intercourse, is specifically intended to prevent procreation—whether as an end or as a means.”

RELATED: The damage done – again – by the Pope’s interview

In what appears to be an almost perfect anticipation of the argument made by Pope Francis on Wednesday, Paul VI then goes on to add:

Neither is it valid to argue, as a justification for sexual intercourse which is deliberately contraceptive, that a lesser evil is to be preferred to a greater one, or that such intercourse would merge with procreative acts of past and future to form a single entity, and so be qualified by exactly the same moral goodness as these. Though it is true that sometimes it is lawful to tolerate a lesser moral evil in order to avoid a greater evil or in order to promote a greater good,” it is never lawful, even for the gravest reasons, to do evil that good may come of it (18)—in other words, to intend directly something which of its very nature contradicts the moral order, and which must therefore be judged unworthy of man, even though the intention is to protect or promote the welfare of an individual, of a family or of society in general. Consequently, it is a serious error to think that a whole married life of otherwise normal relations can justify sexual intercourse which is deliberately contraceptive and so intrinsically wrong (emphasis mine).

Although Pope Paul VI recognized that lesser evils might be tolerated for the sake of avoiding greater evils, he expressly condemned the notion that one could morally defend an act of contraception, which he calls “intrinsically wrong,” by claiming that a lesser evil is to be preferred to a greater one. This appears to be the precise reasoning of Pope Francis.

Pope John Paul II, in his encyclical letter Veritatis Splendor (the Splendor of Truth), cited the same passage of Humanae Vitae for the purpose of condemning erroneous opinions in moral theology in 1993. In opposition to those theologians who wished to claim that intrinsically evil acts could somehow be justified under certain circumstances, John Paul II writes:

Reason attests that there are objects of the human act which are by their nature ‘incapable of being ordered’ to God, because they radically contradict the good of the person made in his image. These are the acts which, in the Church's moral tradition, have been termed ‘intrinsically evil’ (intrinsece malum): they are such always and per se, in other words, on account of their very object, and quite apart from the ulterior intentions of the one acting and the circumstances. Consequently, without in the least denying the influence on morality exercised by circumstances and especially by intentions, the Church teaches that “there exist acts which per se and in themselves, independently of circumstances, are always seriously wrong by reason of their object

Pope John Paul II then quoted Pope Paul VI’s statement, quoted above, that contraception cannot be defended as the lesser of two evils. “With regard to intrinsically evil acts, and in reference to contraceptive practices whereby the conjugal act is intentionally rendered infertile, Pope Paul VI teaches: . . .” The quote cited above by Pope Paul VI follows, verbatim.

In Veritatis Splendor, John Pual also cites the following statement from a 1967 allocution by Pope Paul VI to members of the Congregation of the Most Holy Redeemer: “Far be it from Christians to be led to embrace another opinion, as if the Council taught that nowadays some things are permitted which the Church had previously declared intrinsically evil. Who does not see in this the rise of a depraved moral relativism, one that clearly endangers the Church's entire doctrinal heritage?”

Despite the seemingly clear disparity between Pope Francis’ words and those of his recent predecessors regarding the intrinsic evil of contraception, the papal spokesman Fr. Federico Lombardi is defending the pope’s statement, and is even citing Pope Paul VI to justify it.

“The contraceptive or condom, in particular cases of emergency or gravity, could be the object of discernment in a serious case of conscience,” Lombardi told Vatican Radio today. “This is what the Pope said.”

Lombardi added that the pope was speaking of “the possibility of taking recourse to contraception or condoms in cases of emergency or special situations. He is not saying that this possibility is accepted without discernment, indeed, he said clearly that it can be considered in cases of special urgency.”

Lombardi reiterated the example that Pope Francis made of Pope Paul VI’s supposed “authorization of the use of the pill for the religious who were at very serious risk” of rape.  This, said Lombardi, “makes us understand that it is not that it was a normal situation in which this was taken into account.”

BREAKING: Vatican affirms Pope was speaking about contraceptives for Zika

The damage done – again – by the Pope’s interview

Zika and abortion, a tale of two viruses

Pope Francis compares Zika abortion-pushers to the Mafia: abortion is ‘a crime, an absolute evil’
4 key facts about the Zika Virus, birth defects and abortion