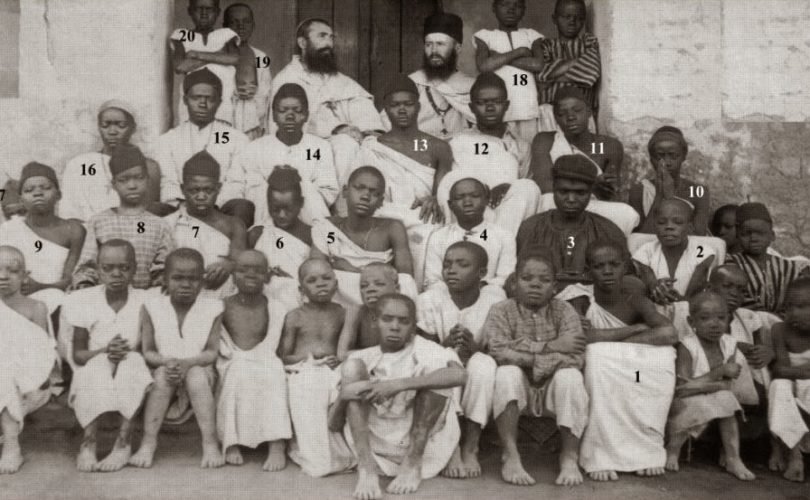 Some of the future Uganda martyrs photographed in 1885, less than a year before they were killed, at Bukumbi Mission in Mwanza.

AFRICA, November 30, 2015 (LifeSiteNews) — Did anyone notice that during Pope Francis’ trip to Africa in which he commemorated the 50th anniversary of the 1964 Canonization of the 22 Ugandan martyrs, not once did he mention — or even hint — that their deaths were occasioned by their refusal to indulge the king in his request for homosexual relations?

King Mwanga of Buganda — what is now southern Uganda — began killing the Christians in 1885 after the majordomo of his household, who was a Christian leader, pleaded with him to abandon the homosexual practices he was engaging in with the young men who served as his pages. Christians at Mwanga's court did everything they could to protect the pageboys from Mwanga’s unbridled passions.

When pageboys newly instructed in the Christian faith found courage to refuse the King’s sexual advances, in a rage he had them rounded up and ordered them to choose between himself and their faith. The Christians who chose their faith were immediately condemned to be burned to death. Their executioners recalled that they died calling on the name of Jesus and proclaiming, “You can burn our bodies, but you cannot harm our souls.”

In his November 28 address to the nation’s priests and religious, while Pope Francis urged them to “not forget” the memory of the martyrs, he warned them about “becoming accustomed to inheriting the goods of those who’ve gone before,” calling it a “dangerous enemy.”

“The Church in Uganda can never become accustomed to the distant memory of its martyrs….It can’t live ‘piggy-backing.’ The glories of the past were the beginning but you have to make the glory of the future,” he said.

The closest the pope came to mentioning something remotely connected to the martyrs' death was in his homily at the Ugandan martyrs’ shrine in Namugongo where he said that the martyrs’ witness “shows to all who have heard their story, then and now, that the worldly pleasures and earthly power do not bring lasting joy or peace.”

Has it become too politically incorrect for the pope himself to even mention the sin of homosexuality?

At a time in the Catholic Church when influential leaders have led many to believe, as a result of the recently concluded Synod on the Family, that the Church stands ready to adopt an open-minded perspective on sexuality, what the pope didn’t say about the Ugandan martyrs speaks louder than what he did say.

It's too bad — and even a serious negligence — that the pope missed a golden opportunity to tell the world about the beautiful Christian teaching on marriage and sexuality that these noble Ugandans were willing to die for.