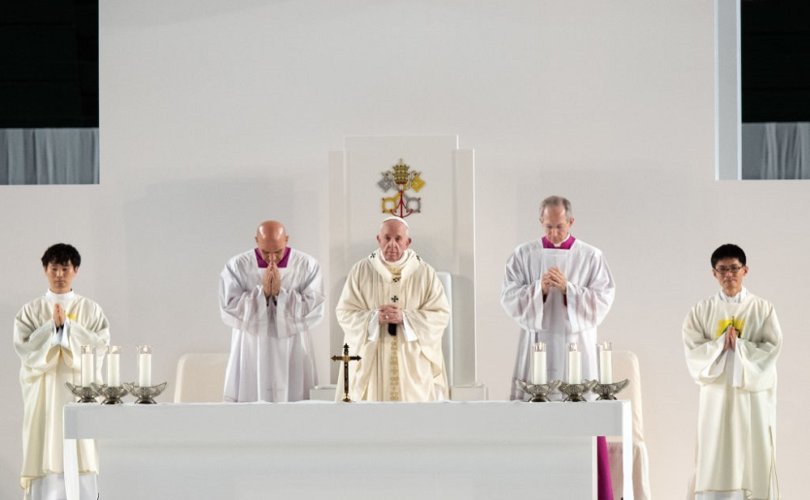 December 23, 2019 (Remnant Newspaper) — Pope Francis's Christmas address of December 21 — the traditional feast of the doubting Thomas the Apostle and of the Ember Saturday of Advent — is exactly the antithesis of the famous “hermeneutic of continuity” address delivered by Pope Benedict XVI on December 22, 2005. In that speech, Ratzinger (successfully or unsuccessfully) tried to reconnect the postconciliar experiment with the 3,000-year history of the Church as God's Israel.

Francis is saying, in effect: “Nope, not gonna happen. In fact, we need to ramp up the modernization efforts and leave behind that stale, rigid old past. If we want to keep Christianity, we have to change everything.”

After a groanworthy citation of the Jesuits' favorite out-of-context line from Cardinal Newman — “here below, to live is to change, and to be perfect is to have changed often” — Francis continues:

The history of God's people — the history of the Church — has always been marked by new beginnings, displacements and changes. This journey, of course, is not just geographical, but above all symbolic: it is a summons to discover the movement of the heart, which, paradoxically, has to set out in order to remain, to change in order to be faithful…. All of this has particular importance for our time, because what we are experiencing is not simply an epoch of changes, but an epochal change. We find ourselves living at a time when change is no longer linear, but epochal. It entails decisions that rapidly transform our ways of living, of relating to one another, of communicating and thinking, of how different generations relate to one another and how we understand and experience faith and science. Often we approach change as if [it] were a matter of simply putting on new clothes, but remaining exactly as we were before. I think of the enigmatic expression found in a famous Italian novel: “If we want everything to stay the same, then everything has to change” (The Leopard by Giuseppe Tomasi di Lampedusa).

He insists that he is not talking about incidental or accidental change:

Seen in this light, change takes on a very different aspect: from something marginal, incidental or merely external, it would become something more human and more Christian. Change would still take place, but beginning with man as its centre: an anthropological conversion.

In light of all the transhumanism and LGBTQ stuff going on, to talk about an “anthropological conversion” is pretty scary stuff. What else could it mean but a change in how we understand man himself, and how we preach and minister to him? In such words we see how faithfully Francis is following the agenda of the revolutionary faction at Vatican II who considered modernity a period unique in history, cut off from the past and requiring for Modern Man a new liturgy, a new catechesis, a new theology — in short, a new Church.

As I tried to wrap my mind around this address, I came to the conclusion that the key to understanding Francis is to see that he confuses the traditional concepts of spiritual oldness (sinfulness) and newness (renewal by the grace of Christ) with, respectively, tradition and change, and therefore with rigidity and flexibility, legalism and life in the Spirit. So while the Church sees in Christ the New Adam and prays at Christmas to be renewed by His newness so that the oldness of sin may be purged from us — a process of lifelong conversion for which the Church's very tradition, developed under the guidance of Divine Providence, offers powerful assistance — Francis instead sees in tradition the Old Adam and the Pharisee, and in evolutionary creativity the New Adam and the man of the Gospel.

Appealing to memory is not the same as being anchored in self-preservation, but instead to evoke the life and vitality of an ongoing process. Memory is not static, but dynamic. By its very nature, it implies movement. Nor is tradition static; it too is dynamic, as that great man [Gustav Mahler] used to say: tradition is the guarantee of the future and not a container of ashes.

Note how he misquotes Mahler, who actually said something deeper and more beautiful: “Tradition is not the worship of ashes, but the preservation of fire.” That is, Mahler sees the content of tradition as a powerful fire to be preserved, while Francis sees it as a prop for future novelty.

Having stated that modern people are no longer Christian, he cries out:

In big cities, we need other 'maps', other paradigms, which can help us reposition our ways of thinking and our attitudes. Brothers and sisters, Christendom no longer exists!

Yes, Your Holiness: many believing Catholics would agree that we need a paradigm shift, to get us away from the worn-out strategy of the past five decades since the Council, which has failed mightily in keeping the Catholic world Catholic. We might try — I know it's a daring concept — restoring our tradition! Experiments have shown that it attracts the youth, you know. We also recognize that Christendom has fallen — but those who are Catholic should aim to rebuild it, rather than accepting its demise in the nihilistic spirit of a fait accompli. After all, Christendom is nothing but the Faith fully lived out, fully incarnated in culture.

Humanity, then, is the key for interpreting the reform. Humanity calls and challenges us; in a word, it summons us to go forth and not fear change.

This is classic Montini language from the 1960s and 1970s: taking humanity generically as the point of reference, rather than the God-Man Jesus Christ and His revelation.

Linked to this difficult historical process there is always the temptation to fall back on the past (also by employing new formulations), because it is more reassuring, familiar, and, to be sure, less conflictual. This too is part of the process and risk of setting in motion significant changes. Here, there is a need to be wary of the temptation to rigidity. A rigidity born of the fear of change, which ends up erecting fences and obstacles on the terrain of the common good, turning it into a minefield of incomprehension and hatred. Let us always remember that behind every form of rigidity lies some kind of imbalance. Rigidity and imbalance feed one another in a vicious circle. And today this temptation to rigidity has become very real.

And now we arrive at the vintage Bergoglio text, where his fingerprints are most apparent. As any student of Church history knows, reform movements in the Church have always looked to the past for inspiration and models. Rejuvenation has come from rediscovering buried treasures. But not for this pope: looking to our heritage and our saints is, for him, a sign of fear and hatred.

I'm reading a very interesting manuscript now by a British philosopher, and this footnote really made me pause:

It is significant that effectively the same dispute about the origin of the Word occurs in both Muslim and in Christian history: on the one hand, whether the Koran is merely created or exists eternally as an uncreated expression of what God requires of us, and on the other, whether the Son is truly of God's substance or only the first (perhaps) of all created things. In both spheres, the notion that it was 'created' was preferred by rulers, as it suggested both that the Word as it had been previously declared might turn out to be obsolete, and — by analogy — that their own arbitrary commands were valid.

Think about this for a moment. Both Christian and Moslem rulers wanted the divine Word (however differently they understood it) to be something created, so that it could be improved on or surpassed or suppressed by their own dictates. Believers, on the other hand, confessed the divinity of the Word, its immutability, and its normativity that stood above every ruler.

I'm not a big interreligious dialogue kind of guy, but this insight into history points to Pope Francis in a big way. His not-really-denied comments to Scalfari, his semi-Arian meanderings in homilies, his willingness to contradict the teaching of the New Testament on adultery and capital punishment (et cetera), all indicate that he regards the Word as a creature, over which, in theory, the papacy has authority. The Christmas address today provides further scaffolding: change is potentially limitless, because there is nothing immutable (“rigid”) in Christianity that cannot be changed.

Could anyone need more evidence that the Church is being ruled by someone who is barely, or not at all, Catholic? He wouldn't even make a good Moslem. At the end of the address, the Pope, no longer hiding his cards, quotes one of the arch-progressives of the era:

Cardinal Martini, in his last interview, a few days before his death, said something that should make us think: “The Church is two hundred years behind the times. Why is she not shaken up? Are we afraid? Fear, instead of courage?”

How interesting, Your Eminence and Your Holiness. About 200 years ago was 1812, a time we can still readily associate with the French Revolution and its long aftermath that cast a stygian shadow over Europe and the world. It was the heyday of Enlightenment rationalism and liberalism, soon to yield to the age of scientific positivism and materialism. If the Church were really and truly behind these times, it would be a mark of divine blessing and protection. If the Church ever “catches up” to them, we will know that Our Lord's prophecy has been fulfilled: “When the Son of Man returns, will he find faith on earth?”

This is a fate of which we ought to be afraid, because it would mean the loss of our souls. “Fear ye not them that kill the body, and are not able to kill the soul: but rather fear him that can destroy both soul and body in hell” (Mt 10:28). This is the holy fear for which the pope has no room, even as the innkeepers had no room for the humble Virgin and her godfearing spouse St. Joseph.

Published with permission from The Remnant Newspaper.