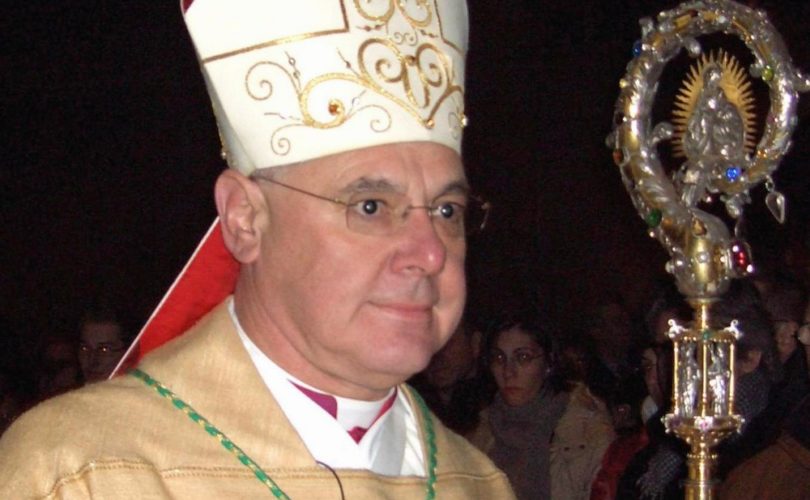 ROME, September 24, 2015 (LifeSiteNews) – Pope Francis’ doctrine chief emphasized earlier this month that the Church cannot give into the totalitarian impulse in modern society, but instead must bear witness to the true freedom found in the Cross.

As LifeSiteNews reported, Cardinal Gerhard Ludwig Müller, the Prefect of the Congregation for the Doctrine of the Faith, has spoken clearly against the spirit of heresy and revolt among the German Bishops in a talk he gave in Regensburg, Germany, on September 1.

What was not then reported, however, was the fuller range of topics that Cardinal Müller raised in his Regensburg speech on the occasion of the release of the German version of Cardinal Robert Sarah's new book, God or Nothing. Now that the CDF itself has published the entire speech on its website (parts of it are available in English translation here) it is possible to report more adequately on this important talk.

Cardinal Müller speaks in his speech about our own “age of the creeping or noisy de-Christianization of the Global Society” and hence about the “question of the survival of Christianity in the world of today and tomorrow.”  He sees that, since man turns more and more away from God, he turns himself into an idol:

Man is oriented toward the absolute. Only where God is above and in man is there found truth in freedom and justice in love. Where man tries to take power over the absolute, he turns himself into an idol who, with the help of the clench for a totalitarian dominance, brings man sternly into line and thus enslaves him by means of a political exercise of power which makes use of the media.

The German cardinal speaks out clearly against the totalitarian spirit that reigns in postmodern societies and calls us to bear witness to our Catholic Faith. This will mean a struggle and will involve suffering. Here, Müller reminds us of the “Christian identity,” which means “to know that from the Cross flows the true freedom, the true happiness of man and his eternal salvation.”

A danger for the Church, according to him, lies in her inordinate adaptation to today's constricting ideologies and cultures.  Müller also reminds us that these ideologies are not interested in Christ, but seek to co-opt the Church for its own interests: instead “of searching for truth which stems from the definitive Revelation in Christ, ideological movements want to turn the Church into an opponent or collaborator of Naturalism – in its Liberal, Nationalistic, or Communist versions.” In speaking of the current atheistic ideology, the head of the CDF has some very important and strong words to say that are worth quoting at length, since he also speaks about the killing of unborn children and of the growing practice of euthanasia:

In the program for the destruction of morality and with the atheisation of mankind, the moral code of law is turned into its opposite. The killing of a child in the mother's womb becomes a women's right; the disposal of a severely sick person or of the dying person becomes an act of mercy; the multi-billion dollar programs to promote abortion and contraception [birth prevention] are euphemistically declared to be part of the struggle against poverty – with the further result (and intention) that the natural resources are being preserved for the rich and are not being consumed by the armies of the poor; additionally, the self-destruction by means of drugs is now an act of self-determination, and the human trafficking with women [and children] from poor countries is only lukewarmly being combated – or, even worse, trivialized as being merely caused by themselves. The multi-billion dollar sex-and-pornography industry is nothing other than an exploitation of human beings who are already being deprived of their personal dignity. It unworthily joins the ranks of the greatest of crimes against humanity.

While quoting Cardinal Sarah's own book, which Müller especially and thoroughly praises, he claims that “the gender ideology has no argumentative foundation and that it has to be seen as a consequence of the radical feminism and the purported sexual revolution of the year 1968.” He also says that the topic of homosexuality has been given far too much attention – in the face of so many other “fateful questions of humanity.”  Müller also reminds us that the Church alone offers real help for homosexuals – while respecting their dignity as human persons to show them the way of true happiness. Yes, says Müller, the Church protects homosexuals “against their instrumentalization for the sake of the ideological proof that man is not made by God, but, rather, that he is a product of a societal self-and-external determination which one could thereby manipulate in a random fashion.”

Here he continues to describe the dangers of the gender theory:

Müller describes it as a form of “neo-Colonialism” “when the Development Aid for Africa – as offered by international organizations and Gender-Ideology States – is connected with the adaptation of this destructive ideology. 'They shall rather starve to death if they do not want to expose themselves to our brain washing'; this is the shameless blackmail.” With these strong words, he rebukes the West for using monetary means (and manipulated debt bondage) in order to get the African and other countries in the world to come in line with the West's gender ideology.

In preparation for the upcoming October Synod on the Family, it is also worth considering the words of the Cardinal about marriage. In that section of the speech where he speaks about the Sixth Commandment and its violation, Müller reminds us of the fact that God never tires of forgiving us – if we sincerely ask him for forgiveness and if we are truly willing to do reparation and to mend our lives, and hence to turn away from sin. He courageously warns the Church about the effect of ignoring these principles when he says:

The scandal does not lie in the fact that the Sixth Commandment has been violated – and still is again and again violated. The real scandal would be – and it would be the apostasy of the Church from God – if the Church would not anymore name the differences between good and evil; or if she – in a shameful way – would even declare that to be good which God declares to be a sin; or if one would even refer to God with pious words in order to justify the sin […]

At the end of his talk, the German cardinal expresses his now somewhat famous warning about a possible schism to come soon in the Catholic Church in Germany and thus the need for the Germans especially to learn from the Africans about their own loyal and enlivened Faith. He thanks Cardinal Sarah for his own personal courage and witness to the full truth of the Faith, where he is determined “not to cut in half the truth for the sake of a compromise.” And Müller concludes: “In the face of God, there is either all or nothing. With God, we have everything, without Him, we are nothing.”