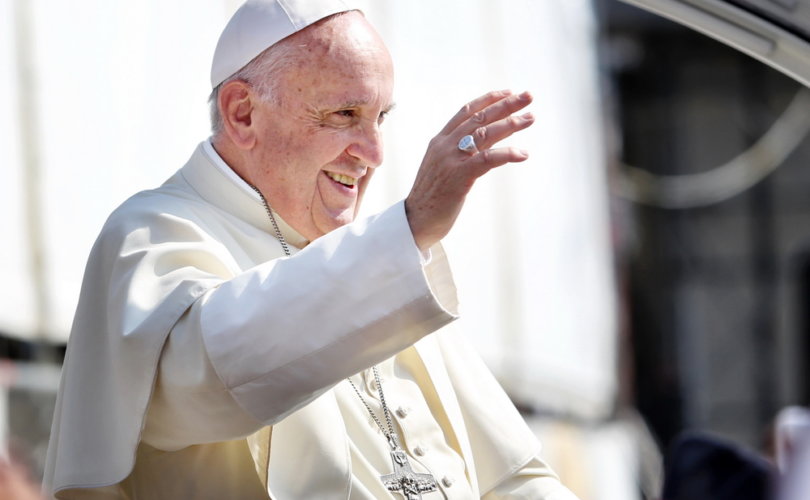 September 26, 2018 (LifeSiteNews) –  Pope Francis released a letter on Wednesday defending his secret agreement with the Chinese Communist Party over the appointment of bishops, claiming that it will help “heal wounds of the past.”

The controversial decision—perhaps the most controversial of a papacy dogged by controversy—accedes to the Communist Party’s demand that it be allowed to name bishops, whom the Pope will then approve.

Some in the Vatican may disagree with that characterization, but there is no other conclusion that one can reasonably draw.

The previous day, speaking to journalists while returning from a trip through the Baltics, Francis insisted that he, and not the Communist authorities, would have the final say in who is named. “Rome names them,” he said, “the pope names them.”

If this were true, it would mean that those same authorities had backed off from their longstanding demand that they, and they alone, advance candidates for China’s dioceses. Without seeing the exact terms of the agreement, which are unfortunately hidden from us, it is impossible to know exactly what procedure, if any, has been set up to preserve papal authority in this regard.

But what we do know—because Pope Francis himself confirms it in his letter—is that he has already accepted as bishops all seven Patriotic “bishops” who have been ordained over the past few years without papal mandate.  The Communist authorities had demanded that the Pope lift the excommunications of the seven as a condition of signing the agreement and he complied.

Now it may be that each and every one of these illicitly ordained bishops proved upon examination to be utterly deserving of papal recognition. But, given the numbers involved, it is hard to avoid the conclusion that the entire group was given a kind of blanket amnesty. If this were the case, I suppose it would still be technically true to say that the Pope had “named them,” although not in the commonly understood sense of the phrase.

Do the Communist authorities see this action as a precedent, and conclude that this pope is prepared to validate any future candidates for bishop that they might choose to advance? It would be surprising if they didn’t. This is especially true given that the Pope also acceded to a second, equally controversial demand: that several validly ordained bishops of the underground Church—who had long been thorns in the sides of the authorities–be demoted and/or retired prior to the signing of the agreement.

Given all this, why would Beijing not think that the Pope would prove equally compliant in the future in accepting those candidates they would advance?  It has never stopped insisting on total control.

Writing in the latest issue of the bi-monthly Communist Party theoretical journal Qiushi, or Seeking Truth, Wang Zuoan, director of the State Administration for Religious Affairs, said China had to remain in charge on religious matters.

That’s clear enough, isn’t it?  The only way for the agreement to work is for the Pope simply to go along with Beijing’s choices.  To do otherwise would interfere in China’s “sovereignty.”

How likely is it that a lowly Chinese Vice Minister of Foreign Affairs, who was deputized to negotiate and sign the agreement with the Vatican, would have violated the express policy of the Chinese Communist Party on matters concerning national sovereignty?  Not very, I would say.

I found other parts of the Pope’s letter confusing as well, such as the convoluted, passive voice sentence which reads: “When, in the past, it was presumed to determine the internal life of the Catholic communities, imposing direct control above and beyond the legitimate competence of the state, the phenomenon of clandestinity arose in the Church in China.”

Here the suggestion is that “clandestinity”—hiding from the Communist authorities–is no longer necessary because these same authorities are supposedly no longer “imposing direct control above and beyond the legitimate competence of the state.”

But this is patent nonsense.  New controls are being imposed on the Catholic Church, and on all religions, even as I write. The increasingly oppressive Communist regime headed by a Communist party leader, Xi Jinping, who self-consciously models himself on the brutal Chairman Mao Zedong, is cracking down on all forms of religious expression.

New restrictions on religious activity were announced on February 1st of this year. According to a priest of the Underground Church, the new rules state that “all religious sites must be registered, no religious activities can be held beyond registered venues, non-registered clergymen are forbidden to host religious liturgies, and that minors and party members are forbidden from entering churches. … The living space for the Church is getting less and less.”

Has anyone in the Vatican read these new regulations, which make it clear that China is quickly reverting to Maoist-type oppression? Do they consider that banning anyone under the age of 18 from entering a church an act falling within the “legitimate competence of the state”? Has it occurred to anyone there that now may be a particularly inauspicious time to force the Underground Church into the embrace of the Chinese Communist Party, as the new agreement does?

I note that Article 73 of the new regulations expressly forbids a priest or bishop from “being subject to the control of foreign forces”, a rule which would seem to violate the allegiance they owe to the Magisterium. The same regulations forbid them from “organizing and presiding over unapproved religious activities held outside religious venues.” Strictly interpreted, this would mean that a priest could be punished saying Mass in a private home, or even for blessing someone outside the church precincts.

The Pope writes, “I now invite all Chinese Catholics to work towards reconciliation.”

But the division between Catholics in the underground and patriotic Churches was not caused by the Catholics themselves. Rather, it arose in reaction to actions by the Chinese Communist Party, which in 1958 set up a Party-controlled Church called the Catholic Patriotic Association. Those Catholics who were not willing to compromise their faith went underground.

This division cannot be healed by Catholics themselves, because they were not the cause of it.  The Chinese Communist Party was the cause of the original division, and it remains today a dominating and controlling presence over all Catholics in China.

The entire exercise seems somehow backwards, because historically it was the Underground Church that remained loyal to the Magisterium, while the Patriotic Church accepted the authority of the Chinese Communist Party to govern its affairs.

Now their roles are seemingly reversed. The Pope’s secret agreement apparently recognizes the Catholic Patriotic Church, and puts the onus on the long-persecuted Underground Church to accept supervision and control by its authorities.  That is to say, it lends the authority of the Magisterium to the Communist Party itself, which will be able to claim—rightly—that the Pope has ordered underground bishops, priests, and laity to cooperate with the religious authorities anointed by the Chinese Communist Party.

Will the secret agreement help to unify China’s divided Catholic Church and “heal the wounds of the past?” Or will it only deepen that division by driving the Underground Church even further underground as the Catholic Patriotic Church and its bishops are recognized by the Vatican?

Anyone who wants to understand the difference between Pope Benedict and Pope Francis merely has to read and compare their two letters to the Chinese faithful.  The letter of the Pope Emeritus (a phrase that breaks my heart) is detailed and refined. It shows a deep understanding of the situation in China, is compelling in the immediacy of its prescriptions, and is filled with a spirit of hope and charity.

The short letter of the current occupant of the See of Peter is none of these things. It is vague and unconvincing.  Its central argument—that the faithful in China and around the world should simply trust that he knows what he’s doing–relies upon the story of Abraham.

As the Pope writes, “Called by God, Abraham obeyed by setting out for an unknown land that he was to receive as an inheritance, without knowing the path that lay ahead. Had Abraham demanded ideal social and political conditions before leaving his land, perhaps he would never have set out. . . . I want to confirm you in this faith … and to ask you to place your trust ever more firmly in the Lord of history and in the Church’s discernment of his will.”

In other words, Pope Francis is asking Catholics to trust his secret agreement with the Chinese Communist Party because he has correctly discerned the will of God.

Perhaps he has.  Nevertheless, in dealing with a situation as complex as that which is found in China, and one which involves the exercise of a considerable amount of prudential judgment, I would welcome an argument more compelling than a simple appeal to papal authority.

Steven W. Mosher is the President of the Population Research Institute and the author of “Bully of Asia: Why China’s Dream is the New Threat to World Order.”