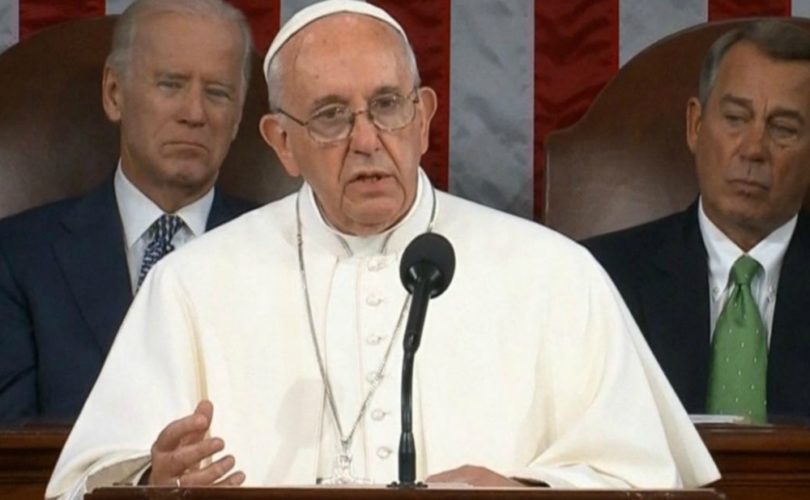 October 8, 2019 (The Catholic Thing) — The Church, in her long history, has never been confronted with the situation like the one in which she now finds herself. Pope Francis recently spoke of a possible schism within the Church, a schism that does not frighten him. We have had many schisms in the past, he says, and there will be schisms in the future. So, there is nothing to fear in the present. However, it is the nature of the present possible schism that is new, and this unprecedented new schism is frightening.

One cannot help but think that Francis is referring to members of the Church in the United States. Francis receives, from America, his most theologically challenging and pastorally concerned criticism, which centers on a questionable remaking of the faith and of the Church. Such censure, it is believed by Francis's cohort, originates from within a conservative intellectual elite who are politically motivated, and many of whom are wealthy.

Francis thinks that they are unwilling to change, and so refuse to accept the new work of the Spirit in our day. Ultimately, one discerns that he believes his critics are psychologically and emotionally impaired, and so must be dealt with gently (though that gentleness is yet to be experienced by those who fall under his vindictive abuse). He himself has called those who oppose him many insulting names.

What Francis does not realize (and his close associates fail to grasp) is that the overwhelming majority of his American critics would never initiate a schism. They recognize that he is the pope and thus the successor of Peter, and that to remain within the Catholic Church is to remain faithful to the pope, even if it entails being critical of the pope in one's faithfulness to him.

Some may wish that an actual schism will take place in America in order to get rid of the obdurate conservative element and so demonstrate that they were not really Catholic all along. But that is not going to happen, because those critical bishops, priests, theologians, commentators, and laity (more laity than Francis will admit) know that what they believe and uphold is in accord with Scripture, the Church councils, the ever-living magisterium, and the saints.

As has been often noted, Pope Francis and his cohort never engage in theological dialogue, despite their constant claim that such dialogue is necessary. The reason is that they know they cannot win on that front. Thus, they are forced to resort to name-calling, psychological intimidation, and sheer will-to-power.

Now, as many commentators have already pointed out, the German church is more likely to go into schism. The German bishops are proposing a two-year “binding” synod that, if what is proposed is enacted, would introduce beliefs and practices contrary to the universal tradition of the Church.

I believe, however, that such a German schism will not formally happen either, for two reasons. First, many within the German hierarchy know that by becoming schismatic they would lose their Catholic voice and identity. This they cannot afford. They need to be in fellowship with Pope Francis, for he is the very one who has fostered a notion of synodality that they are now attempting to implement. He, therefore, is their ultimate protector.

Second, while Pope Francis may stop them from doing something egregiously contrary to the Church's teaching, he will allow them to do things that are ambiguously contrary, for such ambiguous teaching and pastoral practice would be in accord with Francis' own. It is in this that the Church finds herself in a situation that she never expected.

It's important to bear in mind that the German situation must be viewed within a broader context: the theological ambiguity within Amoris Laetitia; the not so subtle advancing of the homosexual agenda; the “re-foundation” of the (Roman) John Paul II Institute on Marriage and Family, i.e., the undermining of the Church's consistent teaching on moral and sacramental absolutes, especially with regard to the indissolubility of marriage, homosexuality, contraception, and abortion.

Similarly, there is the Abu Dhabi statement, which directly contradicts the will of the Father and so undermines the primacy of Jesus Christ his Son as the definitive Lord and universal Savior.

Moreover, the present Amazon Synod is teeming with participants sympathetic to and supportive of all of the above. One must likewise take into account the many theologically dubious cardinals, bishops, priests, and theologians whom Francis supports and promotes to high ecclesial positions.

What the Church will end up with, then, is a pope who is the pope of the Catholic Church and, simultaneously, the de facto leader, for all practical purposes, of a schismatic church. Because he is the head of both, the appearance of one church remains, while in fact there are two.

The only phrase that I can find to describe this situation is “internal papal schism,” for the pope, even as pope, will effectively be the leader of a segment of the Church that through its doctrine, moral teaching, and ecclesial structure, is for all practical purposes schismatic. This is the real schism that is in our midst and must be faced, but I do not believe Pope Francis is in any way afraid of this schism. As long as he is in control, he will, I fear, welcome it, for he sees the schismatic element as the new “paradigm” for the future Church.

Thus, in fear and trembling, we need to pray that Jesus, as the head of His body, the Church, will deliver us from this trial. Then again, he may want us to endure it, for it may be that only by enduring it can the Church be freed from all the sin and corruption that now lies within her, and be made holy and pure.

On a more hopeful note, I believe it will be the laity who bring about the needed purification. Pope Francis has himself stated that this is the age of the laity. Lay people see themselves as helpless, having no ecclesial power. Yet if the laity raise their voices, they will be heard.

More specifically, I believe it will depend mostly on faithful and courageous Catholic women. They are the living icons of the Church, the bride of Christ, and they, in union with Mary, the Mother of God and the Mother of the Church, will birth anew, in the Holy Spirit, a holy Body of Christ.