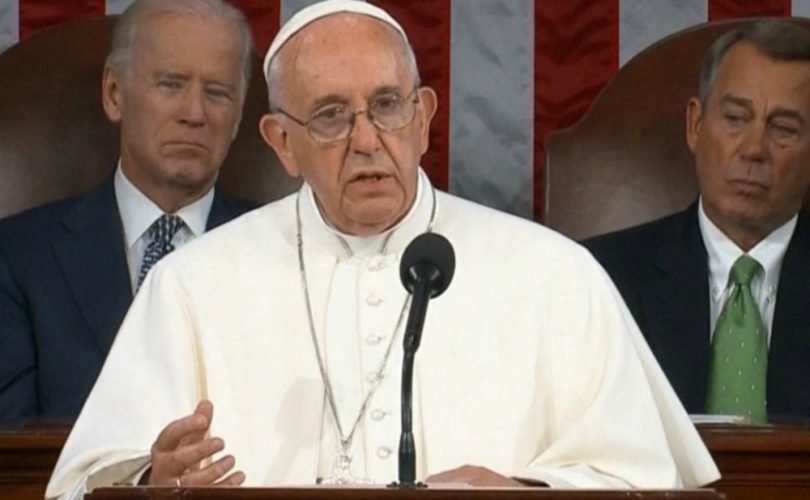 January 30, 2020 (The Catholic Thing) — Pope Francis’s headline-grabbing words last year — “inequality is disastrous for the future of humanity” — reflected the long doctrinal dialectic following Vatican Council II. At the Council, the focus of social justice increasingly shifted from the tenets of Rerum Novarum — which recognized “the enormous fortunes of some few individuals, and the utter poverty of the masses,” but opposed State control of wealth. Pope Leo’s earlier encyclical specified that to give to the indigent “is a duty not of justice (except in extreme cases) but of Christian charity.” The Council, by contrast, focused on guaranteeing equality and, therefore, emphasizing wealth distribution over wealth creation.

Yet there is little correlation between poverty rates and inequality. Experience has shown that reducing economic inequality does not of itself lead to reducing poverty. On the contrary, since 2008 the worldwide recession has reduced inequality by reducing the wealth in the hands of the rich, without benefiting the poor.

This was confirmed in 2018 by a study conducted in the UK (“Living standards, poverty, and inequality”), which showed that inequalities were few in the poorer areas of Britain, while in places where the poor are better off there are also greater inequalities.

In the past fifty years, with the conviction that some sort of panacea lies in a sagacious redistribution of “resources,” about $1.1 trillion in development aid has been transferred from wealthy countries to Africa. Has this bettered the life of Africans? No, say many, among whom author Dambisa Moyo, who in her book, Dead Aid: Why Aid Is Not Working and How There Is a Better Way for Africa, points to the well-being achieved by African countries which have refused the aid. Meanwhile, the ones that have become addicted to aid have remained trapped in the vicious circle of debt, corruption, market manipulation, continued poverty, and the need for more aid.

That poverty is not an incurable malady is demonstrated by a counterexample: the development of formerly poor countries such as South Korea, Taiwan, Singapore, Hong Kong, and parts of India — to say nothing of the transformation of Ireland and of Poland.

The success of Nobel Prize recipient Mohammed Yunus’s microcredit programs was born of his refusal to take the easy way out by distributing the tiny sums of money required to help the poorest of the poor in Bangladesh. His method of not giving, but lending out the needed pennies and requiring prompt repayment of micro-interest, is geared to training the bank’s clients — mostly women — to run small businesses. The virtues involved are straight out of the Parable of the Talents (Mt. 25:14–30): not coercion but self-reliance, thrift, honesty, cooperation, working to meet the needs of others.

As to the capitalist society par excellence, in 2018 the United States stood accused before the U.N. Human Rights Commission of doing “very little about the fact that 40 million of its citizens live in poverty, 18.5 million in extreme poverty and 5.3 million in third-world conditions of absolute poverty” despite being “the world’s wealthiest nation.”

Yet U.S. poverty thresholds are much higher than in most of the rest of the world: in 2019, a family of four was considered poor with an income of $25,750 (the individual threshold is $12,140). And this does not take into account non-monetary income, such as public housing, Medicaid or food stamps; nor does it consider people’s savings or property.

Research shows that 42 percent of “the poor” own the house they live in, with an average of three bedrooms, one-and-a-half bathrooms, and a garage. Eighty percent have air conditioning and cable or satellite television; three-fourths own at least one car or pick-up. Even families ranked “extremely poor” typically own a computer, a DVD, and a mobile phone. Over half of poor families with children have videogame consoles such as Xbox or PlayStation.

Moreover, the consumption of protein, vitamins, and minerals is practically the same for the children of poor families as for those belonging to middle-class families. On average, even children of “poor” U.S. families grow to be taller and sturdier than the GIs who landed in Normandy. Despite whatever social, educational, and spiritual problems that may exist in a developed nation like the United States, inequality is hardly the outrage bodies like the U.N. Human Rights Commission apparently would like it to be.

And by comparison, China today, while having converted to capitalism (despite everything under the strict control of the Communist Party), is celebrated for its enormous macroeconomic growth. There are, however, no consistent estimates of the extent to which people have benefited from this (I quote the celebrated and far from conservative French economist Thomas Piketty). Hence, attempts at tracing inequalities in China are highly unreliable.

What we know is that there exists a level of non-income in China relating to the reportedly millions of slave laborers in the Laogai (i.e., work camps) and Uighur labor camps scattered across the country. Since its admission to the WTO in 2000, little has been done to force China to close down these camps. On the contrary, it has actually begun to propagandize its “re-education” programs at the U.N.

In a globalized world, the existence of slave labor anywhere is not only a moral disgrace for the global bodies that do nothing to stop it, it is also a major factor depressing working-class salaries across the rest of the world.

And this is to say nothing of recent revelations about the brainwashing, “re-education,” and outright repression of religious groups — Muslim, Christians, and even traditional Chinese Buddhists and Hindus.

Pope Francis, like the international organizations dedicated to responding to such things, is right to want to remedy poverty, inequality, and even outright exploitation wherever they may exist. But to solve a problem means, first of all, to understand it properly — and to look to the real-world examples of what has worked and what, quite clearly, does not.