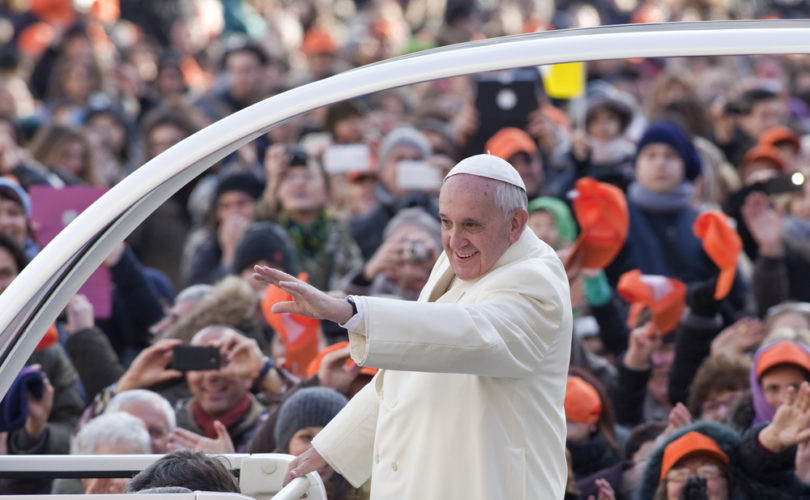 May 20, 2015 (LifeSiteNews.com) — On May 13, the very day of her son Jose’s funeral, Bernardita Vial received a letter from Pope Francis.

The Pope had learned about little Jose when he was still in the womb and not expected to survive very long after birth because he had been diagnosed during pregnancy with anencephaly, a condition that usually causes the death of the child shortly after birth. Bernardita had written to Pope Francis a few weeks previously to share her story and her Faith.

The Pope’s letter was read at the funeral. He acknowledged “the strength with which you are facing this period of life,” saying “these are difficult moments.” He thanked her for her testimony: “It moves me…” He expressed appreciation for “your love as a mother and your coherent life.”

Assuring her of his prayers, he wrote that he would “pray for her and for her family, as well as for those who share the Christian commitment in favor of life in any circumstance in which it is found…(and) that the Lord’s presence be your strength in these moments, and help you to be a witness of the merciful love of God for those who pass through similar circumstances…”

Little Jose had come to be somewhat famous, even before his birth. People from all over the world had heard about his mother's courageous defense of her unborn son through media reports some weeks ago. In an unprecedented action, on March 25, the International Day of the Unborn Child, people from many countries sent an “Open Letter” to the unborn Jose expressing their love and solidarity with Jose and Bernardita.

In countries where abortion is legal, a distraught mother in Bernardita's situation may give in to the pressure of the mistaken “wisdom” of medical experts who take advantage of the mother's distress to encourage her to let them kill her child in the womb, rather than letting the baby be born and live for as long as nature allows.

Bernardita, while distraught and disturbed at the initial diagnosis, was blessed to live in a country where babies' lives like Jose's are protected in law. (There currently is no legal abortion in Chile; mother and child are protected equally in law.) She also had an understanding physician who helped her see through her current distress, and supported her. Even knowing that her precious child might not live much beyond birth, Jose was still her son whom she loved and wanted to protect.

Bernardita and her family treated little Jose just as the son/brother that he is, knowing that it wasn't up to them to decide to “terminate” the little one's life.

What made Jose famous, was that the new president of Chile, an abortion supporter, is calling for changes in the laws protecting babies like Jose from dismemberment or other forms of abortion. Bernardita felt a strong desire to speak out against any change that would open up the country to abortion, including in cases of sick little babies like Jose.  Bernardita's TV interview on CNN-Chile in February was an extraordinary defense of the child, and a plea to help mothers in this situation. Especially powerful was her description of how presenting abortion as an option to a mother when she first learns of her unborn child's condition, takes advantage of the mother at a very vulnerable time. (See CNN – Chile interview in Spanish here or a LifeSiteNews report in English here.)

On the eleventh day of May – the day after Mother’s Day was celebrated in Chile – Jose came out into the world and let his Mom and family see him.

The prenatal diagnosis had been accurate, but Mom wasn't going to let that sadness stop her from hugging and welcoming her precious baby. Jose’s father and two older brothers were there with Jose, also. Through his Baptism shortly after birth, Jose entered into the most profound relationship possible – oneness with God his Father in heaven, whom he was soon to join.

The moments with Jose were brief – he died about 40 minutes after birth – but they were moments of profound peace, according to a friend of the family.

Throughout his short life, Jose only knew love. What a blessed child!

And what a blessed family that by giving love, received it.  They are very much at peace, and have no regrets.

The full letter in unofficial English translation appears below. For the entire letter of the Holy Father in Spanish, click here.

(Letter received by Bernardita Vial of Chile from Pope Francis on May 13, the day of the funeral of her son Jose. Jose was born on May 11 and died approximately 40 minutes after birth, having been baptized. Unofficial translation by Dan Zeidler from original Spanish.)

I have received your letter in which I sense the strength with which you are facing this period of your life, certainly very special: these are difficult moments. I am very grateful for this gesture of confidence. May God reward you for your kindness in sending it to me. I am grateful to you for your testimony. It moves me, and your love as a mother and your coherent life do me good.

I assure you that I am with you and that you have my prayers.  I will pray for you and your family, as well as for those who share the Christian commitment in favor of life in any circumstance in which it is found, and I will tell the Lord to keep strengthening you, that his presence be your strength in these moments, and to help you be a witness of the merciful love of God for those who pass through similar circumstances. And I ask you to please not to forget to pray for me.

May Jesus bless you and the Holy Virgin take care of you.