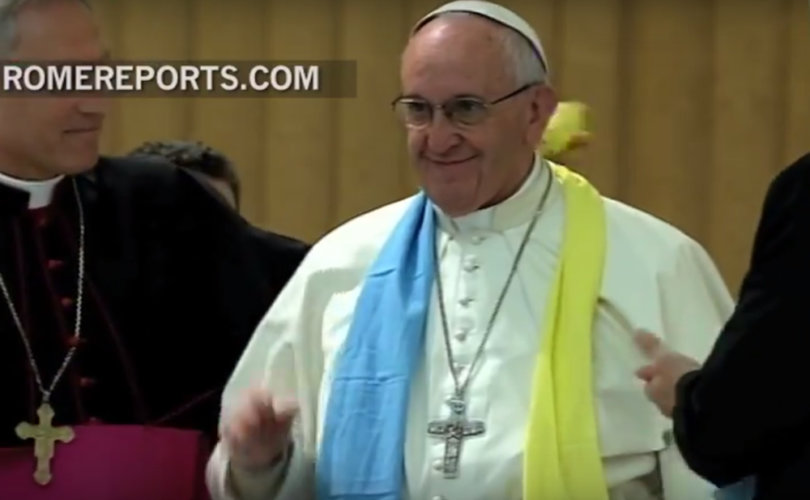 Pope Francis wears a scarf presented to him by Lutheran pilgrims.RomeReports.com

The audience took place before the Pope’s trip to Lund, Sweden, for a commemoration of the Protestant Reformation 500 years ago. The meeting will also celebrate 50 years of official ecumenical dialogue between Catholics and Lutherans.

In the Holy Father’s speech to pilgrims he expressed gratitude for the initiative of the ecumenical pilgrimage that made its start in Germany and ended in Rome. He emphasized Baptism as the unifying basis for dialogue between the two Christian confessions and expressed hope for a continuous ecumenism.

During the audience, the Pope received and put around his neck a yellow and blue scarf bearing the name of the German pilgrim group. The same scarf was laid around the statue of Martin Luther that was decorated and on display in the Vatican audience hall.

The first question came from a girl living in a region where 80 percent of the population is unbelieving. She asked (translated): “My friends do not go to Church, but they are my friends. Do I have to help them to go to Church or is it enough that they remain good friends?”

Pope Francis answered that the “last thing” the girl has to do is to “speak.” He urged her to, “live like a Christian, like a Christian girl: chosen, forgiven, and on a path.”

Then he argued ambiguously: “It is not licit that you convince them of your faith; proselytism is the strongest poison against the ecumenical path.”

“You must give testimony of your Christian life; it will be your testimony that will stir the hearts of those who look at you,” he added.

And he concluded: “It will be the Holy Spirit that moves the heart with your testimony – that is way you ask – and regarding that you can tell the 'why,' with much thoughtfulness. But without wanting to convince.”

The Pope seems to have chosen a clumsy way of encouraging the girl to pass on her faith.

His remarks here echo his previous strong words to condemn those who are doing Christ’s work, namely, spreading the Good News. If the pope thinks proselytism, in its widest interpretation (“the act of becoming a proselyte” – a person who converts from one opinion to another), is poison, then how does he think Christians can spread the Gospel?

With his condemnation, Pope Francis poorly answered the question of a 15-year-old girl in the manner he emphasized that it is not she who will ultimately convert the hearts of men but rather the Holy Spirit, and that she can only pave the way for God to act.

Within the framework of the commemoration of 500 years of the Reformation – an event that hardly deserves “celebration” – the Pope does not seem to be able to think of a world without the Protestant denominations; a world in which the Christians would all be Catholic, as it would largely be had it not been for Luther. In such a world, ecumenism would become unnecessary, since all Christians would be “one” in the Church.

Most puzzling is that Pope Francis called the heartfelt wish of a girl who wants to tell her friends about Christ in order to make them happy “poisonous.”

Likewise, a message like this hardly articulates what John Paul II wrote in his encyclical, Ut unum sint: “Together with all Christ’s disciples, the Catholic Church bases upon God’s plan her ecumenical commitment to gather all Christians into unity” (Nr. 5), a unity that is the Church, because she is the “sacrament of unity.” “Rather, she is permanently open to missionary and ecumenical endeavor, for she is sent to the world to announce and witness, to make present and spread the mystery of communion which is essential to her, and to gather all people and all things into Christ.”

The meeting ended with an off the cuff joke after the pilgrims asked the Pope, “Who is better? The Evangelicals or the Catholics?” Emphatic laughter followed, yet the response failed to appear.

15 year old girl: My friends do not go to Church, still they are my friends. Do I have to reconcile them with going to church or is it enough to remain good friends?

Pope Francis: The first question, the one that was posed in the context of the region having 80% of the population without a creed, is: “Do I have to convince these friends – good ones, who work and who are happy – do I have to convince them of my faith? What must I say to convince them?” Listen, the last thing you must do is to “speak.” You have to live as a Christian, like a Christian: convinced, forgiven, and on a path. It is not licit to convince them of your faith; proselytism is the strongest poison against the ecumenical path. You must give testimony to your Christian life; testimony will unsettle the hearts of those who see you. And from this unsettling grows one question: but why does this man or this woman live like that? And that prepares the ground for the Holy Spirit. Because it is the Holy Spirit that works in the heart. He does what needs to be done: but He needs to speak, not you. Grace is a gift, and the Holy Spirit is the gift of God from whence comes grace and the gift that Jesus has sent us by His passion and resurrection. It will be the Holy Spirit that moves the heart with your testimony – that is way you ask – and regarding that you can tell the “why,” with much thoughtfulness. But without wanting to convince.