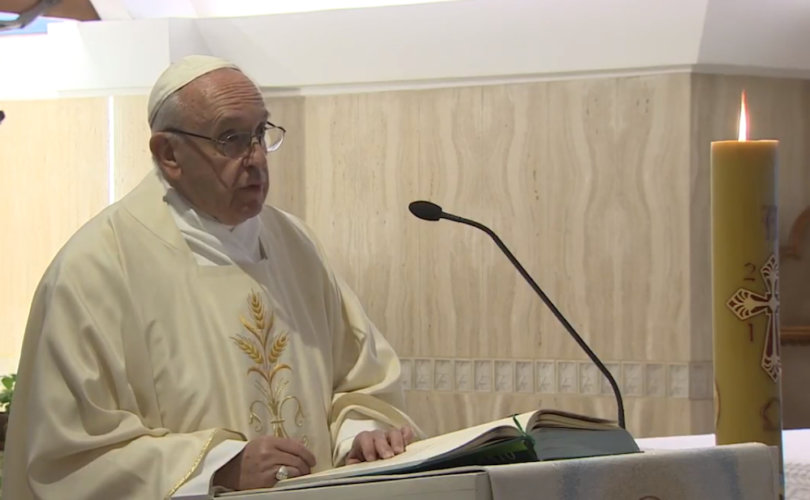 January 3, 2019 (LifeSiteNews) — With the Thursday morning release of Pope Francis’ eight-page letter to the U.S. bishops, a portion of whom are currently in attendance at a retreat in Mundelein, Illinois,  the Pope seems to suggest  that the current sex abuse crisis —and resulting “crisis of credibility”— is isolated to the United States, laying the responsibility solely at the door of the U.S. bishops — and not on himself.

In the letter, the Roman Pontiff notably opens that his the bishops' retreat would be a time of “prayer and discernment … a necessary step toward responding in the spirit of the Gospel to the crisis of credibility that you are experiencing as a Church” [bolded text added by author]. He continued, “In recent years, the Church in the United States has been shaken by various scandals that have gravely affected its credibility. These have been times of turbulence in the lives of all those victims who suffered in their flesh the abuse of power and conscience and sexual abuse on the part of ordained ministers, male and female religious and lay faithful.”

The sex-abuse crisis, however, has made international news throughout the last year, as has the pope’s unwillingness to engage in addressing it.

During his trip to Chile at the beginning of 2018, in response to victim’s claims that Bishop Juan Barros had covered up abuse by one of his priests, Pope Francis infamously stated, “The day they bring me proof against Bishop Barros, I'll speak out. There is not one shred of proof against him. It's all slander. Is that clear?” The only retraction came, after uproar from the faithful in Chile spread to the International community — including a stern public rebuke by Cardinal Sean O’Malley of Boston. Later, with revelations of additional abuse and cover-up by Chilean clergy, the entire bishops’ conference offered their resignations to the Roman Pontiff.

And then there is evidence that Pope Francis attacked and stonewalled sex abuse victims while archbishop of Buenos Aires. German national TV channel ZDF created a documentary in 2017 in which it claimed that Pope Francis, as Archbishop Bergoglio of Buenos Aires, ignored cries for justice from abuse victims in his diocese. There is also the case of Pope Francis reinstating and giving back priestly faculties to known-child molester Fr. Mauro Inzoli, against the advice of Cardinal Gerhard Müller, then head of the Congregation for the Doctrine of the Faith.

When Archbishop Carlo Maria Viganò revealed, however, that Pope Francis knew of the allegations against former cardinal and accused pederast abuser, Theodore McCarrick — having him reinstated from sanctions imposed on him by Pope Benedict XVI — it seems the dam broke on what the pope labels in his letter as “the crisis of credibility.” At this, Pope Francis exclaimed, “I will not say a single word,” later only veiling comments on the person of the former Apostolic Nuncio to the United States.

In August, after Pennsylvania Attorney General Josh Shapiro’s grand jury report into the two-year Investigation of Child Abuse and Cover-Up by the Catholic Church, reports of abuse broke from Italy, Germany, and Australia.

Clearly, the “crisis of credibility” is not just with the U.S. bishops, but is plaguing the Church throughout the world and goes all the way to the top.