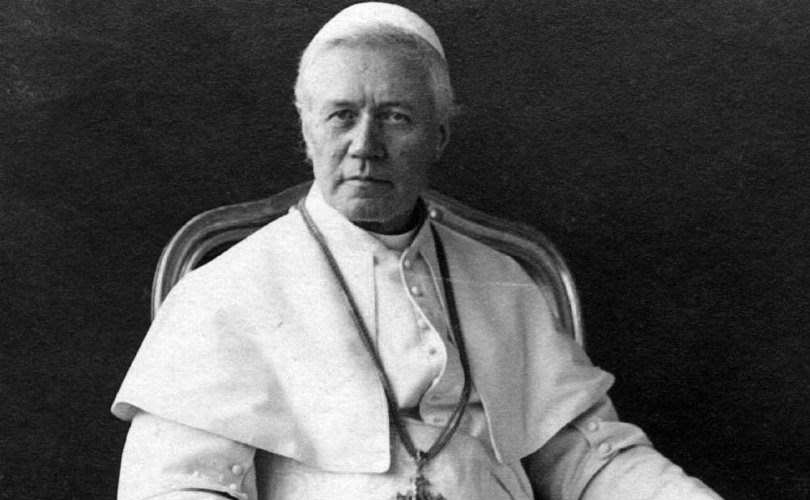 “At the very least it has the same authority as a doctrinal encyclical – it is an authoritative exposition of Catholic doctrine given forth, and guaranteed to be orthodox by the Catholic Church and her supreme head on earth.” 1

Dr John Hagan, rector of the Irish College in Rome and a translator of the Roman Catechism

(LifeSiteNews) — In the first part, we saw the important role that the Roman Catechism could play in helping us navigate the current crisis in the Church. In the previous part, we saw that it was created by the express command of the Council of Trent, which also commanded that it be translated into the various vernacular languages and used as a touchstone for preaching. We saw the meticulous care with which the commissions prepared it, making sure that the text was a sure representation of what all Catholics must profess.

In this part we will consider its authority as a source of doctrine for us today.

The Roman Catechism comes with the approval of very many Roman Pontiffs.

It was begun by Pius IV. It was completed, published and repeatedly commended by St Pius V. It has been praised in the highest terms by these popes’ successors.

For example, in 1761 Clement XII said that no other catechism could be compared with it, and that “the Roman Pontiffs offered this work to pastors as a norm of Catholic teaching and discipline so that there might be uniformity and harmony in the instructions of all.”2

In 1899 Leo XIII taught that all seminarians should possess and constantly study two books: the Summa Theologica of St. Thomas Aquinas, and this Roman Catechism, which he called “that golden book.”3 He wrote of it:

This work is remarkable at once for the richness and exactness of its doctrine, and for the elegance of its style; it is a precious summary of all theology, both dogmatic and moral.

He who understands it well, will have always at his service those aids by which a priest is enabled to preach with fruit, to acquit himself worthily of the important ministry of the confessional and of the direction of souls, and will be in a position to refute the objections of unbelievers.4

We are certainly in need of aids to help us “refute the objections of unbelievers” today – even if solely for our own benefit.

In 1905, St. Pius X wrote that both adults and children needed religious instruction – and he required that the basis for this instruction be the Roman Catechism.5

In addition to the popes, various local councils made the use of the Roman Catechism obligatory following its publication. St. Charles Borromeo ordered that it be studied in seminaries and used throughout his diocese.

John A. McHugh and Charles J. Callan summarise it thus:

[S]ynods repeatedly prescribed that the clergy should make such frequent use of the Catechism as not only to be thoroughly familiar with its contents, but almost have it by heart.6

But the Roman Catechism does not only come to us with magisterial approbations. Let’s consider some of the prominent men who have enjoined this catechism upon us.

Clergy and theologians on the Roman Catechism

Cardinal Valerius – a friend of St. Charles Borromeo – said that the Fathers of the Council of Trent were inspired by the Holy Ghost when they ordered it to be composed; and that it comes to us with the authority of the Vicar of Christ. He also wrote:

This work contains all that is needful for the instruction of the faithful; and it is written with such order, clearness and majesty that through it we seem to hear holy Mother the Church herself, taught by the Holy Ghost, speaking to us.7

The Salmanticenses – the famous Carmelite commentators on the works of Aquinas – said that “the authority of this Catechism has always been of the greatest in the Church.”8 The reasons they give are:

John Henry Cardinal Newman wrote in his Apologia: “I rarely preach a sermon but I go to this beautiful and complete Catechism to get both my matter and my doctrine.”9

The magisterial authority of the Catechism

Mgr Joseph Clifford Fenton explains the relationship between catechisms and the magisterium. Diocesan catechisms, he writes, are exercises of the bishops’ ordinary magisterium:

Catechisms and other approved books of Christian doctrine, in so far as they are adopted by the ordinaries of the various dioceses for teaching the content of the faith to the people of these dioceses, may be said to express the ordinary magisterium of the Catholic Church. 10

Is the Roman Catechism just one such text amongst others? Naturally, not all catechisms are equal. A diocesan catechism carries a different weight to one adopted by a whole nation, or (more importantly) by the universal Church. Fenton continues:

Some [Catechisms] have had a very restricted use. Others, like the old standard Baltimore Catechism in our own country, have really been important factors in teaching the faith to Catholics of an entire nation. Others again, like the Roman Catechism […] have had world-wide popularity and use.11

Fenton concludes that points of doctrine appearing in the moral universality of catechisms are “an indication of the ordinary and universal magisterium of the Catholic Church:

The doctrine that is universally or unanimously proposed in these doctrinal books, in such a way that it is presented to practically all of the Catholics of the world as revealed truth, is certainly a verity taught and exposed infallibly in the ordinary and universal magisterium of the Catholic Church.12

The Roman Catechism itself has certainly been presented to the universal Church over and over again, and contains many points presented as being of revealed truth.

The nineteenth century theologian J.M.A. Vacant, in talking about the authority of catechisms, singles out the Roman Catechism:

The catechism of the Council of Trent and the diocesan catechisms, considered as a whole, express the doctrine of the Supreme Pontiffs and the bishops who had them drawn up; at the same time, they manifest the belief of the faithful, since they are the immediate rule.

As these catechisms are intended to set forth not what is opinion, but what is the faith of all, most of the points which they agree to teach without restriction must be regarded as proposed to our faith.13

A text like the Catechism of the Council of Trent, published with the authority of the Roman Pontiff for the universal Church, and repeatedly commended by his successors, is certainly a safe, authoritative witness to the teaching of the Church’s magisterium.

There can be no doubt that its authority is unparalleled by other texts in the same genre. As McHugh and Callan said, it is:

A handbook of dogmatic and moral theology, a confessor’s guide, a book of exposition for the preacher, and a choice directory of the spiritual life for pastor and flock alike.

No other catechism has occupied a comparable place in the life of the Church. This important text is the foundation of an educated approach to the Catholic religion. It contains the most fundamental doctrines of the faith, proposed and explained with clarity: and a solid foundation like this is vital for keeping us grounded in further studies.

Every Catholic home – especially in our current crisis – should contain a copy of the Roman Catechism.

1 Quoted in ‘Introduction’ by McHugh and Callan, in The Catechism of the Council of Trent, Tradivox Vol. VII, Sophia Institute Press, Manchester, NH, 2022 p 32

2 The Catechism of the Council of Trent (hereafter “RC”), trans. John A. McHugh and Charles J Callan, Baronius Press, 2018. Introduction by McHugh and Callan xxxv.

5 ‘Introduction’ by McHugh and Callan, in The Catechism of the Council of Trent, Tradivox Vol. VII, Sophia Institute Press, Manchester, NH, 2022 p 29-30

13 Chapter IV of Vacant’s The Ordinary Magisterium of the Church and its Organs, as yet unpublished in English by The WM Review. He later goes on to say: “Nevertheless, there is the affirmation of some opinions which, while being the most probable, are discussed by theologians.” As such, the various statements must be taken as they are given: those things that are affirmed absolutely as of faith are to be taken differently to things asserted as probably opinions, and so on. Cf. how JMA Vacant again singles out the Roman Catechism in his discussion of the organs of the universal ordinary magisterium: “But they [‘the beliefs of the universal Church’] will be found even more surely […] in the Catechism of the Council of Trent and in the whole body of diocesan catechisms, drawn up for the guidance of the clergy of the parishes in the day-to-day instruction of the believers. These are in fact documents in which the Apostles and their successors formulated rules of faith for the faithful, and rules of teaching for pastors, by means of which the unity of doctrine is maintained.” See also his final chapter and conclusion. Chapter II available here: https://wmreview.co.uk/2021/08/27/vacant-oum-introduction-chapter-ii/