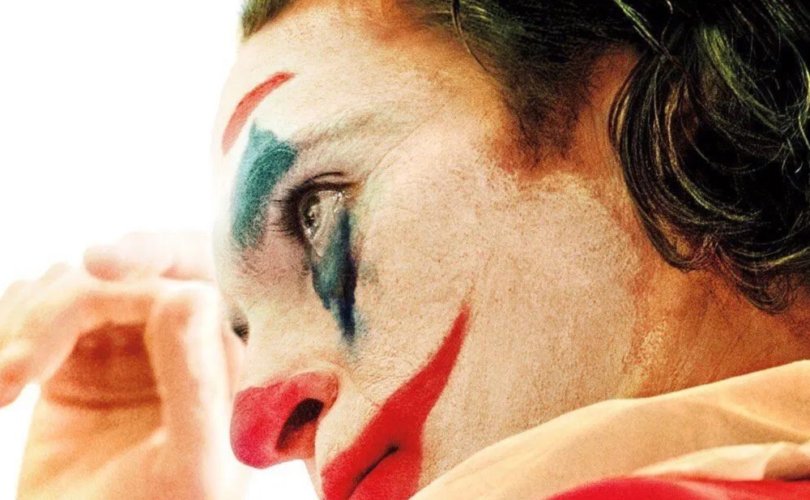 October 23, 2019 (LifeSiteNews) — Topping $55 million in box office revenue, Joker, starring Joaquin Phoenix as the eponymous character, has proved popular with the crowds. Despite starkly negative backlash from the media, it has gained a massive following across the country, and some have speculated that it will top $1 billion in revenue in the not too distant future.

A great deal of the success can likely be attributed to the reputation it has gained as a subversive masterpiece — a movie that challenges the media establishment and gives voice to the frustrations of “the everyman.” In a society that has grown increasingly prone to social engineering by the rich and powerful, Joker is seen by many as a breath of fresh air.

I am not what you would describe as a fan of the current socio-political dynamics in this country. In fact, I abhor much of what I see trumpeted from the rooftops by the mainstream media. More than that, I despise “groupthink,” even when those thoughts are nominally things that I agree with — I argue that people should believe what they believe based on honest and thoughtful consideration rather than knee-jerk tribalism. No one benefits from groupthink except the ones at the top of the food chain, and even then, only as long as their power lasts.

Given all this, one might reasonably conclude that I would be in favor of a movie that challenges the powerful establishment I so often lock horns with. And perhaps I would…if Joker actually had something positive to contribute to the conversation.

Here’s the thing about broken systems: you don’t fix them by breaking them in a different way. Tsarist Russia was awful for many reasons and desperately needed widespread reform. Communist Russia, however, proved to be even more egregious in its rights violations and crimes against humanity. Yes, the original system needed to be “subverted,” but not with a subversion that only made everything worse.

That’s the problem with Joker. It responds to brokenness with brokenness. Yes, it acknowledges a widespread dissatisfaction with the present state of affairs. It recognizes the broken aspects of our society, the lack of compassion for certain needy people, the dearth of empathy toward the mentally ill, the deep despondency that grips so many, and the diminished value we place on the lives of our fellow human beings. All of these are valid criticisms of modern society and deserve to be addressed…but that’s not what Joker does.

Instead, Joker dives headfirst into the disturbing nihilism of society, confirms the general belief in the meaninglessness of life, and revels in focusing entirely on all the myriad ways we can dehumanize and violate our brothers and sisters. It makes a disturbed, murderous individual the protagonist of the story while failing to properly demonstrate why his actions are wrong. It puts man’s inhumanity to man on the center stage and never presents an alternative.

Folks, that’s not a subversive masterpiece — that’s dangerous. When people are questioning if life has meaning and if people have value, what they need to hear is stories that remind them they do. They need tales of wonder and hope and heroism in the face of darkness. The last thing they need is a story that confirms, intentionally or unintentionally, this anti-humanist idea that there’s no good to fight for. When people lose hope, they stop fighting for a better world, and all the good things they might have done never come to pass.

Fred Rogers’s entire life was a testimony to the impact one man can have on the world — the lives he can touch, the wounds he can heal. How we don’t have to be superheroes to save people. How we don’t have to do great things, just little things with great love. I submit to you that, assuming that the filmmakers do him justice, seeing a movie about Mr. Rogers’s life is a far better use of your time than the nihilistic vicarious evil of the Joker.

I’m not saying we shouldn’t have dark stories and grim tales that deal with the depravity of the world. We need those stories, because that’s a part of our reality — we can’t address evil if we don’t acknowledge it. What I am saying is that we need tales of the brave souls who stand against the darkness, however great or small they may be.

We need tales that look at the evil of the world and reject it!

We need tales that look at our failures and then challenge us to do better!

We need tales that give us heroes!

This is not the time for giving up hope! This is the time for us to be reminded of the goodness and beauty of humanity — of the love we are meant to share!

Now, if you’ll excuse me, I’m going to go watch some Mr. Rogers.