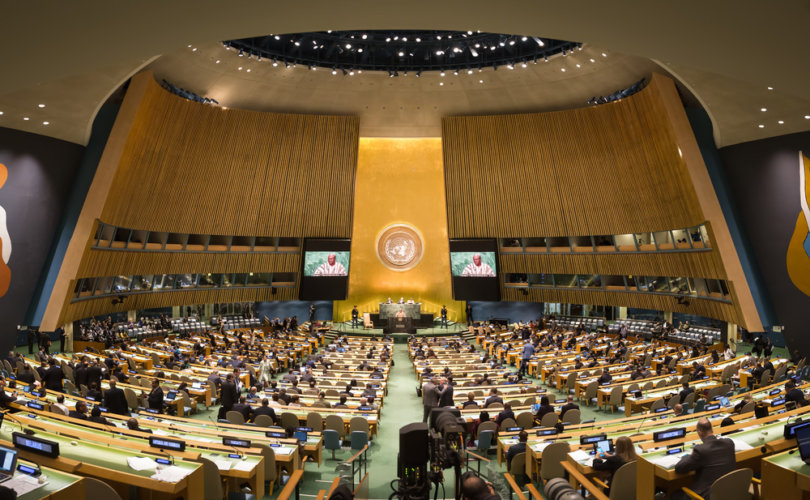 NEW YORK, June 22 (C-Fam) – The General Assembly adopted a plan to begin a long-awaited overhaul of the UN development system that will result in greater power for the UN Secretary General Antonio Guterres.

Ostensibly the plan will attempt to eliminate systemwide duplication and waste and orient the UN development system to achieving the 2030 Agenda for Development. The plan increases the power of the UN bureaucracy overseen by Guterres to leverage the resources of the myriad of agencies and programs that make up the UN system and gives him more supervisory authority over UN development activities.

“The resolution you adopt today ushers in the most ambitious and comprehensive transformation of the UN development system in decades,” Guterres told the General Assembly, even though he had downplayed the significance of the institutional changes of his plans earlier this year.

Member states also emphasized the shift in power and accountability from UN member states to Guterres.

“This resolution changes the way that the UN organizes and runs its development activities. Member states are giving the Secretary-General new and important responsibilities for oversight and coordination of the UN’s development work around the world,” said Ambassador Kelley Currie, the U.S. representative for Economic and Social Affairs, as states adopted the resolution that gives Guterres the green light.

“It now will fall to the Secretary-General to ensure accountability for a more effective and more efficient development system,” Currie emphasized.

The plan increases the authority of UN country coordinators, which previously acted as protocol officers and liaisons between UN agencies and programs and individual governments. That arrangement gave the bargaining power to the national government because each agency and program negotiated alone.

With this change, country coordinators will have the power to decide what programs and agencies should work in any given country and how each country should use domestic and international resources for development.

The collective bargaining power of UN agencies and programs will be concentrated in a single UN bureaucrat who is answerable to the UN Secretary General as opposed to UN member states.

For decades the UN development system evolved in a piecemeal way as a patchwork of mandates for programs and agencies that performed sometimes duplicative and overlapping functions. By concentrating power and accountability in resident coordinators that patchwork of mandates and functions is consolidated in one person.

The U.S. delegation did not object at any point to this increase in power and authority for the UN bureaucracy, though it is likely to challenge the influence of the U.S. foreign assistance. The U.S. expressed concern reserved its caution for working within the existing UN regular budget, which the adopted resolution does. The only delegation that expressed reservations on the concentration of power of the entire UN system in the UN Secretary General was the Russian Federation.

The General Assembly also laid out a framework for further deliberations on other proposals that had less support, including the merger of the executive boards of UN agencies and funds into a single entity, further reducing UN member state supervision. While the resolution did not welcome this option, it did not foreclose the possibility of this after further discussions.

Trump official says US is ‘pro-life country’ at United Nations