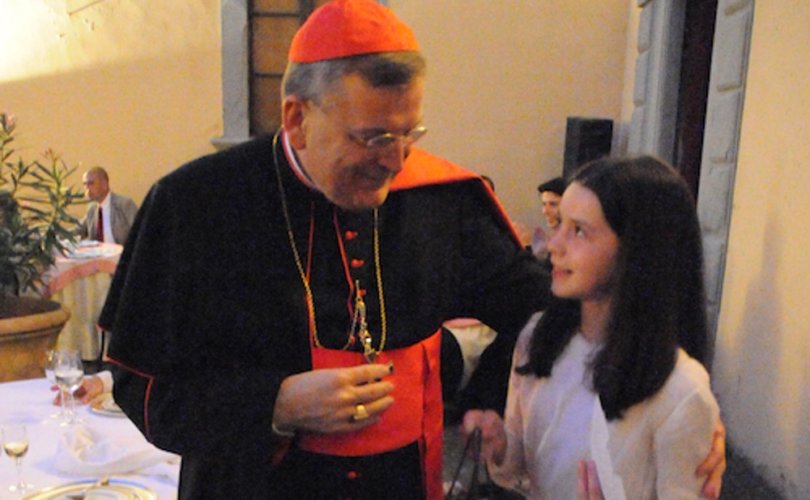 FRANCE (LifeSiteNews) – The gentle and fatherly figure of Cardinal Raymond Leo Burke is very much on my mind and in my prayers since I heard of the worsening of his health. God, please come to the aid of Thy faithful servant! Give him healing and life at a time when Thy Church is so much in need of those who put the truth before any other consideration!

Yes, I know that the saints in heaven can do more for us in this valley of tears than we poor members of the Church militant. I know that death does not come as the end. Yes, God’s will is provident and infinitely good; Thy will be done. But Our Lord taught us to pray in our hour of need. Please, God, through the intercession of the Immaculate Heart of Mary, answer our prayers; we beseech Thee, do not take away from us the pillar of fidelity, the haven of serene acceptance, and defense of the Church’s perennial teachings that is Cardinal Burke.

I remember so many meetings under the sign of bounty and grace!

For me, it all started with conferences by Cardinal Burke in Rome during the pontificate of Pope Benedict. I was struck by His Eminence’s way of effacing himself behind the writings of the Popes. His attitude made me understand what a Cardinal of the Roman Catholic Church really is: a helper to the Roman Pontiff, tasked with counseling the Pope and with making papal teachings known to the flock in order to assist Peter in fortifying the faith of his brethren.

Cardinal Burke’s humble repetition of papal encyclicals, explaining how they applied to present situations and why they were important, was anything but the sign of an incapacity for personal thought. It was, I realized, a complete and wise assumption of his role, like wearing the symbolic red of martyrdom by which cardinals show their willingness to lay down their lives, if needs be, in fidelity to the Vicar of Christ. Thus did he show, I thought, that the Church is one, universal, and hierarchical, and that as a cardinal, he must above all transmit its immutable truths.

— Article continues below Petition —
SIGN: Show Pope Francis the Latin Mass will survive any suppression
Show Petition Text
33816 have signed the petition.
Let's get to 35000!
Thank you for signing this petition!
Add your signature:
Show Petition Text

After the election of Pope Francis, I noted a change in Cardinal Burke’s way of presenting his conferences. They became more personal. They fearlessly contradict or clarify – always with respect and due deference for the papal office – troubling personal statements, acts, and attitudes of the reigning pope, giving hope and support to the many Catholics who are deeply hurt and worried by the watering down of our Church’s doctrine even from the top of its hierarchy.

Truly, in speaking this way, Cardinal Burke lives up to his middle name “Leo.” The Lion. A Lion for truth and Catholic integrity, and also for justice and fair treatment of Catholics under canon law, his special domain of competence and knowledge. A Lion not afraid to walk alone, indifferent to the honors the Church and the world have to offer. A Lion meek before the Lamb of God, deeply conscious of the need to work for the salvation of the Good Shepherd’s flock.

I remember the numerous times I translated conferences and statements by Cardinal Burke into French, for my personal blog, at first, and then, by his request, for His Eminence’s own website, receiving his texts by email at improbable hours of the evening or early morning.

“He fears no one; he has never yet been so outspoken,” I remember exclaiming to my husband a few years ago while working in the passenger seat of our car on the Cardinal’s latest rectification of doctrine. The Cardinal speaks French perfectly, and I have always admired the precision of his corrections, never missing the slightest typo in my sometimes too hastily written translations.

I remember even more vividly and with gratitude the many interviews Cardinal Burke graciously gave me over the years for LifeSiteNews and for French-speaking media. Often did my husband – armed with his camera – and I go up to the Cardinal’s apartment in Rome for a warm and frank conversation. And then there was a blessing, and kind words, and genuine, heartfelt greetings for our family. I know from many that His Eminence never forgets the people he meets, or their loved ones.

I have – I had – another interview with His Eminence scheduled for the upcoming weeks, this time about the recent crackdown on the traditional liturgy of the Church. Please, God, give him recovery and health!

I remember priestly ordinations in Florence according to the traditional Roman rite, and prayer vigils before the Rome March for Life in which Cardinal Burke participated from start to finish, and conferences in France, and private canonical consultations, and encouragements from this Prince of the Church when I wondered whether I was right to continue the work that I am doing.

As Cardinal Burke battles for his life in faraway America, all these memories are drawing a picture in my mind, that of a warrior and a knight who has never stopped fighting for the “Sacred Heart of Jesus and the Immaculate Heart of Mary” whose invocation so often appears in his conferences, statements, and emails because it is their triumph that matters.

Most of all, I remember the outstanding graces we received through Cardinal Burke as a family. Our daughter was confirmed by him at the seminary of the Institute of Christ the King in Gricigliano in Italy in 2011, and our youngest son also received the sacrament of Confirmation from his hands in his private chapel in Rome in the fall of 2013.  This made them, in turn, warriors of and for Christ.

Now, as a family, we pray for “our” Cardinal Burke—and for the return of his strength, when so many things seem to be falling apart.