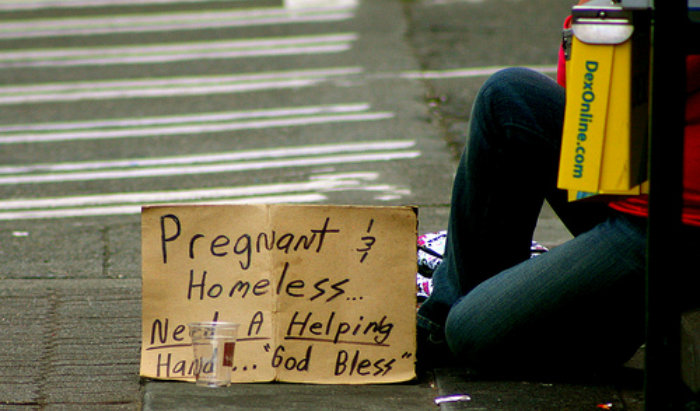 Note: Abby Johnson is the former director of a Planend Parenthood clinic in Texas, who converted to the pro-life cause in 2009 after witnessing an ultrasound-guided abortion. She is now one of the leading advocates on behalf of the unborn.

October 1, 2012 (LifeSiteNews.com) – One night over dinner, a friend of mine told me that he had seen a very pregnant homeless woman on the corner of a busy Austin intersection. I knew the intersection he was referring to…there is a huge non-denominational church on the corner. I felt confident that she had probably received some assistance from them. Maybe they were in the process of trying to help her find resources.

One of the friends with us at dinner, Heather, is the executive director of the Austin Coalition for Life, a non-profit group who holds daily vigils outside of Austin’s four abortion clinics. Their goal is to connect abortion-minded women with pregnancy resources in the area to help them choose life for their child. I was about to deliver my own baby any day, so I was limited with what I could do to reach out to this woman. Heather said she would continue to go by the intersection until she found her.

After several days of unsuccessful attempts, Heather was finally able to connect with her. She explained that there were several pro-life agencies in town that could help her with housing both before and after her baby was born. They could also help with expenses, pre and post natal care, labor and delivery, food, clothing, and all of her other basic needs. She talked to her for a long time and found out that she was running from an abusive relationship and was trying to protect her unborn child from the father.

Heather’s next question was a pretty obvious one … had the megachurch a few hundred feet away offered to help her? Instead of asking the woman and putting her on the spot, Heather decided to go and ask the church if they knew anything about the woman. She was startled at the response. “Well, one of our members took her to the Target Café to share the Gospel with her.” So, no material assistance was offered for her or her baby? No resources offered for where she could receive assistance? No phone calls made to maternity homes or pro-life groups in the area? “No,” the woman responded. “Just the meeting at Target to talk about the Lord.”

Their answer made me disgusted. How can we expect to nourish someone spiritually when their physical needs aren’t met? How can we expect someone to be receptive to the Gospel when they go physically hungry during the day? How can we expect someone to believe in the power of Christ when they don’t know if they will be forced to deliver their baby in alley somewhere? This is Christianity? This is how we treat those in need of help? Certainly not. That is not what faith is about. James clearly states that “faith without works is dead.” What is faith if we are not willing to step out of our comfort zone and get our hands dirty in service to Christ? We are called to be the “hands and feet of Christ,” right? That means service to those who need him … not just words … actions.

Being pro-life isn’t always pretty. And it’s not just about “saving babies.” It is about saving the person … the woman, the baby, the man involved, the family. It is sometimes about putting someone else’s needs above our own. It is about stepping out of the comfortable and moving into a place that is unfamiliar.

Is it comfortable to talk about abortion? Not always. Do people always want to hear about it? Not usually. But silence breeds apathy, and that is what we are soaked in. APATHY. The greatest breeding ground for apathy seems to be in our churches. Why is that? It’s not like the sanctity of human life isn’t all over Scripture. It isn’t as if God didn’t make it pretty clear that life is sacred. We aren’t scared to talk about a slew of other “hot button” issues … but we tend to be silent on the number one issue that has invaded our churches. According to the Guttmacher Institute, seventy-two percent of women seeking abortions come from the church. I actually think that number is low. We performed very few abortions on women who proclaimed to be atheists or agnostic. No, many of them brought their bibles and/or rosaries to their abortion appointments. Many would ask if we would pray with them before the abortion procedure began.

APATHY. It is what keeps these churchgoing women coming to the abortion clinics over and over again. The churches are silent. The majority of clergy are silent. And their silence is deafening! By not speaking up they are telling those in their congregation who are suffering in silence that their sin of abortion is too big for God. That is a LIE. Clergy who are silent on this issue are not doing any one any favors. They are doing their congregation an incredible disservice. With seventy-two percent of abortions coming from the church, a sermon once a year during the Sanctity of Human Life month is not enough!! People are hurting! They are in desperate need of healing and they have no idea where to go because the church is silent. We have become so concerned with “offending” others that we have forgotten about how much our apathy offends God.

If you are in a church where your pastor/priest actively speaks on the sanctity of human life, I encourage you to thank him, and thank him often. It is not easy, but it is right. If you are not hearing the message of abortion and healing from the pulpit, I strongly urge you to go to your pastor and ask why. Share why this is important to you. Share these statistics with them. Share your heart. Just because your pastor is silent doesn’t mean you have to be. Stand up for life. Stand up and speak up. Lives are depending on it. It is time for the church to STAND UP.

30 abortion workers have left, and now abortionist wants out: Abby Johnson
Abby Johnson: Yes, I oppose ALL abortions! But being pro-life doesn’t stop there